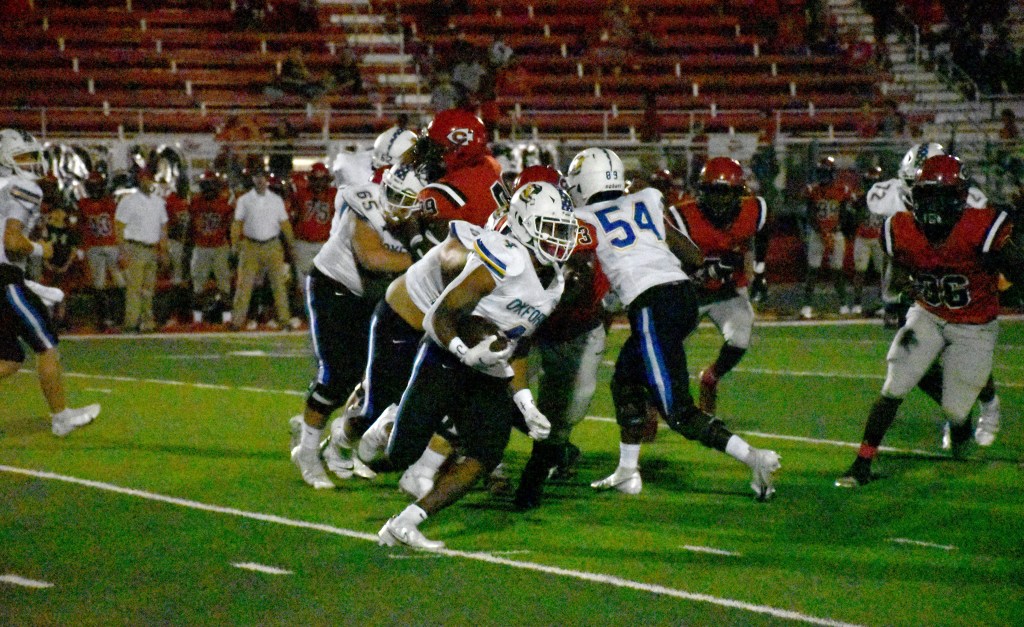 Oxford’s Roman Gregory runs the ball during their game against Clinton at Clinton High School on Friday. The Chargers lost 23-6. (Jared Redding)

CLINTON — Another patented Oxford comeback was simply not in the cards Friday night.

From start to finish, the Chargers had few answers for Clinton’s two-headed rushing attack and were dominated on the line of scrimmage in a 23-6 defeat to the Arrows. The loss snapped a 20-game winning streak in region play, dating back to 2018 against eventual 6A champion Horn Lake. Clinton’s Jordyn Battee and Jakobe Calvin carried the load offensively while Oxford sputtered throughout the night on that side of the ball.

“It’s true in any football if you don’t win the line of scrimmage on either side, you’re not going to win a ball game,” OHS head coach Chris Cutcliffe said. “We never really got into much of a rhythm offensively. Early on, we had drives where we couldn’t finish and score. We couldn’t get anything going after that.”

Much like last week, the Chargers stumbled right out of the gate. On their opening possession, Harvey connected with Ashten Shorter for a 45-yard catch, but failed to cash in. Harvey threw a 13-yard touchdown pass to Omar Howell in the flat, but a holding call negated the score. The Arrows proceeded to stop them on fourth down and took the lead immediately.

In coverage, Oxford’s corner fell down, and Clinton’s Jordyn Battee found his receiver, Micheal Tripp, all alone for an 82-yard touchdown scoring strike. With 7:43 left in the opening quarter, the Arrows had a 7-0 lead.

The Arrows added to the lead shortly afterwards. Alex Sanford botched the ensuing kickoff and Clinton scored eight plays later with a goal line score by Calvin. Just like that, Clinton had a 14-0 lead. After a second failed fourth down attempt, the Chargers finally caught a break. Alex Sanford and Martavious Blackmon met Battee in the backfield and forced a fumble, with Kylan Tumblin falling on the loose ball. Oxford eventually faced yet another fourth down, but Roman Gregory made sure it would work. Gregory found an open hole and hit it for a 15-yard touchdown run, and the lead was cut down 14-6 following a failed PAT.

Blackmon created a second turnover, an interception on the following Arrow drive, but eventually failed on a third fourth down attempt. Calvin would proceed to use a 51-yard run to set kicker Luke Hopkins up for a 37-yard field goal. The Arrows had another chance to score late in the half, but the Chargers held as the first half expired.

Oxford had opportunities early in the third quarter as the defense forced a punt and turnover on downs, but again failed to get much going on the other side of the ball. As the Arrows continued to dominate up front, Calvin put the game out of reach early in the fourth quarter. On 4th-and-1 in Charger territory, Calvin broke numerous tackles behind the line of scrimmage, bounced outside and found the end zone from 29 yards out. Clinton wouldn’t be denied from that point on.

“They do a good job defensively, doing different things, giving different looks. It starts with the rushing attack and they won that battle,” Cutcliffe said.

The Chargers will remain on the road next Friday with perhaps their biggest test to date: a trip to Starkville for the eighth edition of the Little Egg Bowl game. Kickoff is set for 7:00 p.m.

“It’s the nature of playing in this region,” Cutcliffe said. “Game after game, it’s like a playoff game. We didn’t come out on top tonight, but now it’s our job to respond.”