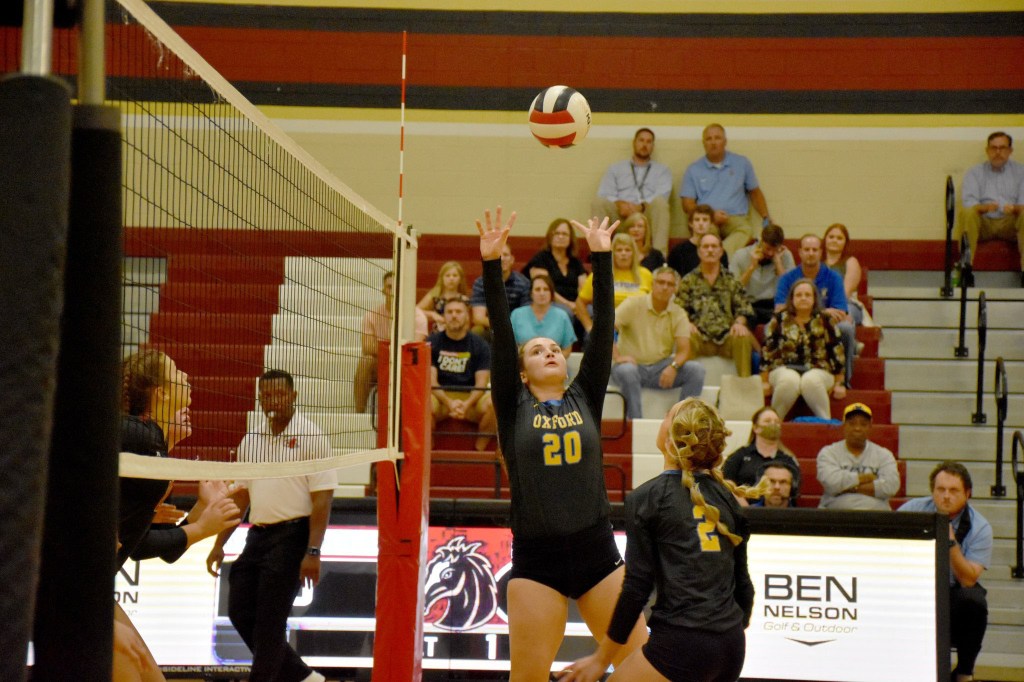 Oxford’s Catherine Bianco (20) sets the ball during their match against Germantown at Germantown High School on Thursday. The Chargers won 3-0 (25-18, 26-24, 25-16) to advance to the Class 6A North Half championship. (Jared Redding)

MADISON — A ruckus opponent crowd failed to faze the Oxford volleyball team despite a dramatic back-and-forth second set. As a result, the road to Ridgeland will now run through Oxford.

There were times throughout the evening where Oxford dominated, but Germantown made things interesting midway through order to keep the game’s intensity alive. However, the Lady Chargers finished what they started in order to survive and advance.

“Our motto all season no matter who we play has been ‘we’re the underdog.’ No matter what, we had that mindset,” OHS head coach Ashley Martin said. “We have to play strong, no matter if we’re up one set, two sets. Nobody is ready to go home… It was loud in here tonight. Our student section this season has also been pretty loud. That really helped us be able to play here.”

Ainsley Tacke finished with 14 kills, followed by Bree Lyons’ 8 kills. In the back end, Madison Jones had 19 digs, one of her best outings of the season.

“(Jones) played lights out,” Martin said. “I was so proud of her. We’ve been working on mindset, being aggressive and making sure we’re covering. She is the leader of the back row. She’s really bought into that.”

Oxford came out dominant right off the bat, jumping out to an early 8-0 lead in the opening set. That cushion allowed them to take the first set despite a late surge by the Lady Mavericks. It wasn’t as easy in the following set.

Both teams proceeded to go back-and-forth all the way through 12 points, with Oxford always a point ahead. Germantown took their first lead afterwards, leading by as much as two, but the Lady Chargers rallied and held a three point advantage late in the second set. Germantown had a rally of their own to tie the game at 24, but Oxford finished strong.

“Our kids are good at fighting through adversity,” Martin said. “It was super intense in that second set. It could’ve been anyone’s game. We finished and put the game away. That’s something we’ve been working on all year, especially the tight games.”

At that point, Oxford wouldn’t be denied with another strong 5-0 start in the third set, cruising the rest of the way.

“I was really proud of us sticking together and getting through that second set, fighting all the way through,” Tacke said. “We knew they were going to come out with more intensity. It’s been a long day, being on the road. We worked for this one.”

Oxford will host Madison Central for the Class 6A North Half championship on Tuesday. First serve is set for 6 p.m.

“We’ve never been to a 6A North Half. I’m so excited to have the O-Zone backing us up,” Tacke said.