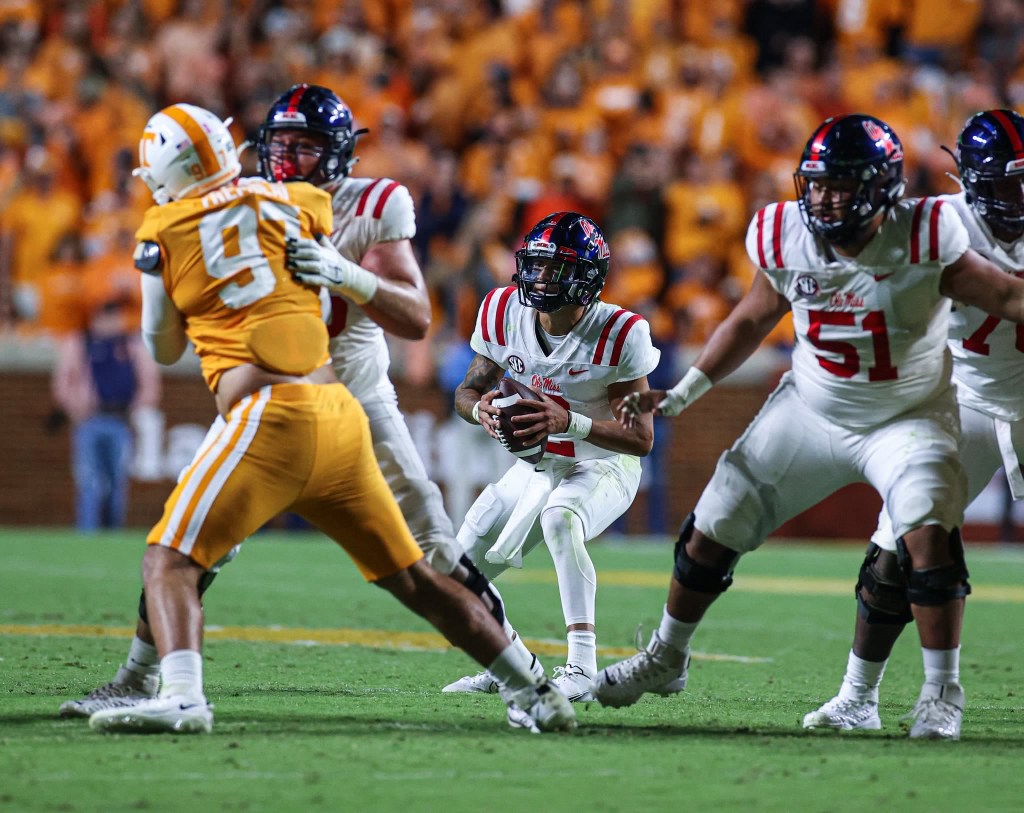 Ole Miss quarterback Matt Corral looks to attempt a pass against Tennessee at Neyland Stadium in Knoxville, Tenn. on Saturday. Corral suffered an injury on Saturday but came back into the game. Lane Kiffin said on Monday Corral's status for the LSU game was uncertain. (Joshua McCoy/Ole Miss Athletics)

For the first time in 14 years, Ole Miss had a player run the ball at least 30 times on Saturday against Tennessee and it might have cost them their starting quarterback for the foreseeable future.

During his regular press conference on Monday, head coach Lane Kiffin gave a limited update on Matt Corral’s health and it was not a very positive outlook ahead of the No. 12 Rebels hosting LSU this weekend.

Corral carried the ball 30 times for 195 yards against the Volunteer defense — the most since BenJarvus Green-Ellis had 33 carries against Missouri in 2007. The Rebel quarterback also threw the ball for 231 yards and two touchdowns.

“He’s not in very good shape. Hasn’t been for the last two days,” Kiffin said of Corral. “You guys know how we are on injuries. Hopefully he will play, but I do not feel good about that right now.”

If Corral, who is considered one of the Heisman Trophy frontrunners, it would snap a streak of 16 consecutive starts, but that’s not the most alarming issue. On the season, Corral has thrown for 1,728 yards and 14 touchdowns. He did throw his first interception of the season on Saturday, ending a streak of 233 pass attempts without a pick.

When asked about a potential injury after the game on Saturday, Corral did not seem too concerned about any lingering effects.

“I just rolled up my ankle. It’s all good, though,” Corral said postgame in Knoxville. “It’s a little stinger. Like, it went dead for a second like a stinger. But yeah, I was good after.”

The depth chart shows Kinkead Dent second with Luke Altmyer as the third quarterback, but when Corral was forced to leave a game for a play on Saturday, it was Altmyer who replaced him.

The sample size is low for Altmyer, who has attempted four passes with zero completions in three games played this season. The true freshman from Starkville has rushed the ball once for a 14-yard pickup. An injury early in the season hindered Altmyer’s progress with the offense.

“Luke is doing a great job. He got setback with an injury,” Kiffin said. “He’s battled back from that. He missed a lot of time and reps with that. He hasn’t really gotten the chance to go in there with any rhythm. He goes in for one play (on Saturday) and the ball gets knocked down. We have good confidence in all our backups.”

Dent has attempted four passes and completed two this season for seven yards.

The next choice could be a return to under center for John Rhys Plumlee. The former quarterback-turned-receiver would be making his first start back at quarterback since the 2019 season.