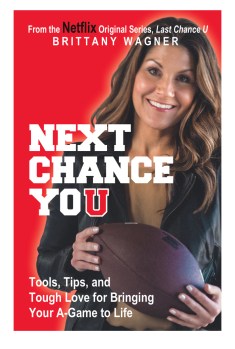 Netflix’s Last Chance U star, athletic academic counselor and motivational speaker Brittany Wagner debuts her first book Next Chance You: Tools, Tips, and Tough Love for Bringing Your A-Game to Life, a guidebook for readers who need help taking their next step in life. (Photo: Brittany Wagner) 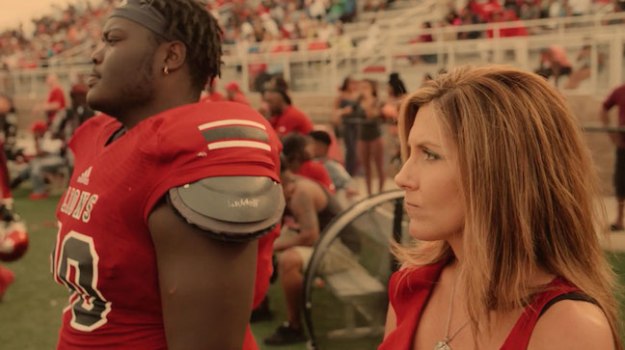 Brittany Wagner stands next to current Toronto Argonauts defensive lineman Ronald Ollie on the sidelines of the East Mississippi Community College’s football field in a scene from Last Chance U. (Photo: Brittany Wagner/Last Chance You) 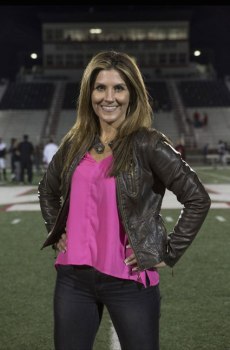 Netflix’s Last Chance U star, athletic academic counselor and motivational speaker Brittany Wagner debuts her first book Next Chance You: Tools, Tips, and Tough Love for Bringing Your A-Game to Life, a guidebook for readers who need help taking their next step in life. (Photo: Brittany Wagner)

Netflix’s Last Chance U star Brittany Wagner did not plan for her life to go in this direction, but she is making the most of every opportunity she is given to help as many people take their next chance with her new book, Next Chance You: Tools, Tips, and Tough Love for Bringing Your A-Game to Life.

There will be a book signing event at the University of Mississippi Barnes & Noble on Saturday, Oct. 23, for Next Chance You from 11 a.m. to 1 p.m. Wagner’s authorial debut is a map for the lost who may need advice and motivation on how to take the next steps in their lives even if there doesn’t seem to be any moves they can make.

Wagner got her big break in the Netflix series, which documented the trials of elite athletes with difficult pasts turning to junior college football for a last shot at turning their lives around and achieving their dreams, as the tough-love dealing, no-nonsense academic counselor.

Wagner worked as a college counselor for athletes for over 15 years and was able to help over 200 athletes obtain college degrees and qualify for National Collegiate Athletic Association Division I schools. GQ magazine caught wind of the program taking place at East Mississippi Community College and was interested in how many athletes were getting onto the next level and wrote an article that Netflix found and prompted the production of Last Chance U.

Wagner didn’t expect the show to be as popular and to have the reach it did. According to her, the show was more popular outside of the United States than within it at points in time.

“I had no idea it would be successful,” said Wagner. “I thought no one would watch it and it was like, ‘Yeah, follow me around. Nobody’s going to watch this anyway.’”

Wagner filmed two seasons of the hit, Emmy-winning show before deciding to go beyond a series and do something bigger.

“Nextflix had really given me a platform that was much bigger than Scooba, Mississippi,” she said. “My goal has kind of always been to change and affect the most lives that I could, so all of a sudden you’re on Netflix and you’re faced with the dream. “

Wagner left East Mississippi Community College along with the show to move to Birmingham, Alabama, and begin her own company Ten Thousand Pencils with the mission to assist at-risk youth and address their physical, emotional and social needs so that they can academically succeed.

She has expanded her reach outside of athletics and brings her experience and wisdom to students all over the country who need the tough love and motivation to reach their goals. Wagner learned through working with troubled athletes that living in difficult social and emotional settings like starvation or abuse will affect a student’s ability to learn.

“If social and emotional needs aren’t being met, it is extremely difficult for them to sit in a classroom in a way that we dictate them to do it and learn,” said Wagner. “That was really the mission of TTP was to help the adult’s in the room understand that we’re all a product of our experiences and we can’t necessarily fit our students in a box and expect them all to learn the same way. Try to meet them from where they are and grow from there.”

As Wagner traveled across the country and spoke at various schools, she realized problems her athletes were facing in east Mississippi were the same problems 3rd graders in Connecticut or 10th graders in Texas were dealing with and was inspired to write Next Chance You.

Next Chance You is as personal as it is a guidebook for others; the lessons Wagner delivers to readers are lessons she had to learn through experience.

“I decided to write the book really to take the lessons that the athletes had taught me, the lessons I had learned and lessons from my own life,” said Wagner. “I wrote it with the concept that we aren’t stuck. This is not our last chance, we all have a next chance and next opportunity in front of us. It’s learning how to maximize the next chance and learning how to cope with life.”

Her inbox is filled with just as many emails from adults as there are emails from students saying they are impacted by her words that have inspired them to go back to school in their 40s, leave a terrible relationship or any action that motivated them to take the next step in their lives.

“I realized that my message wasn’t just for students,” said Wagner. “It was a message that everybody was searching for.”

Wagner said readers should go into her book knowing there is no magic wand to instantly fix their problems or a “sparkly and shiny” opportunity waiting to drop directly into their laps.

“You have to be willing to work and willing to see the silver lining in different situations and then take it,” said Wagner. “When we do that and we open ourselves up, we allow things to gravitate to us when we put ourselves out there.”

A new, scripted television series based on Brittany’s personal and professional life starring Courtney Cox as Wagner and produced by Michael Strahan is in the making.

For more information on Brittany Wagner and her book Next Chance You, visit www.brittanywagner.com.