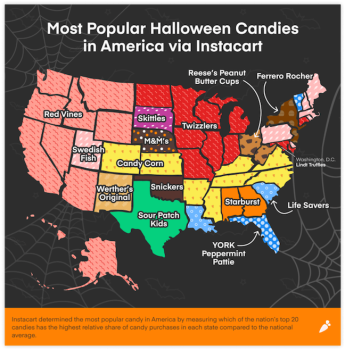 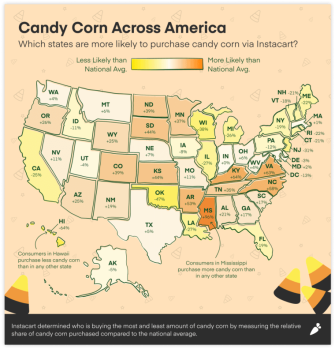 The spookiest time of the year is almost upon us and many are ready to stock up on their favorite treats. Some sweets are more popular than others depending on where you live as data from Instacart and The Harris Poll shows.

According to a recent Instacart survey of 2,063 Americans conducted online by THP, nearly 3 in 4 Americans (73%) celebrate Halloween, and among those who do, more than half say candy is more important to them than costumes on Halloween (54%) if they had to choose.

The eighth most popular product candy corn is highly favored in southern states such as Kentucky, Virginia, North Carolina, Arkansas and Mississippi. According to Instacart, candy corn is the most popular halloween candy in the state.

About 96% of Mississippians purchase more candy corn than any other state. The same cannot be said for the state of Hawaii where people are the least likely to purchase candy corn at negative 64%.

Whatever your preference candy is a key part of the Halloween experience and the spookiest night of the year wouldn’t be the same without them.

This survey was conducted online within the United States by The Harris Poll on behalf of Instacart from Sept. 21-23, 2021 among 2,063 adults ages 18 and older. This online survey is not based on a probability sample and therefore no estimate of theoretical sampling error can be calculated.