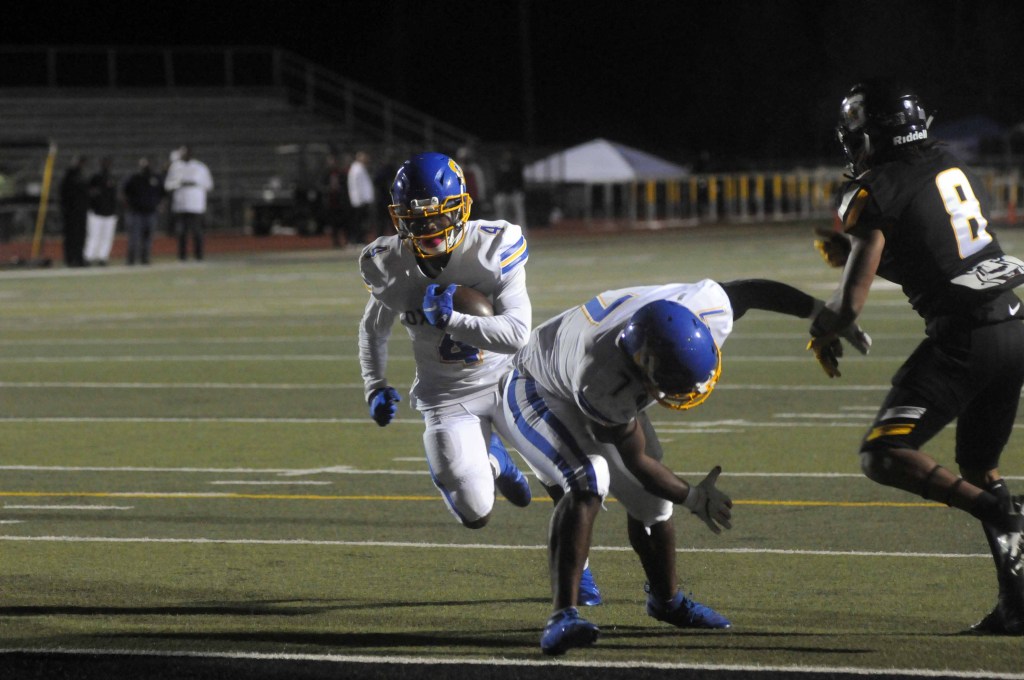 Oxford running back Roman Gregory (4) scores in the first quarter of their game against Starkville at Starkville High School on Friday. (Jake Thompson/Oxford Eagle)

STARKVILLE — All night the Oxford defense was tested all night and when it mattered most they answered the bell.

On Starkville’s fourth 4th down attempt of the game, the Chargers stuffed the run with a little over two minutes remaining, forcing a turnover on downs. From there, Oxford was able to ice the clock for the 42-35 win over the undefeated No. 4 Yellowjackets at Starkville High School on Friday.

The win is the Chargers first over Starkville (8-1, 4-1 Region 2-6A) in the regular season since 2013, helping them bring the Little Egg Bowl trophy back to Oxford for the first time in seven years.

“I was very proud of how we responded throughout the night,” said Oxford head coach Chris Cutcliffe. “It’s been a great rivalry. We’ve had a lot of great games with them. We have a lot of respect for them and we know that coming in. So, you know you’ve got to play a four-quarter game and that’s what I was most proud of tonight.”

Oxford running back Roman Gregory had a career night against the Yellowjackets. Gregory finished the game with 291all-purpose yards and four touchdowns. He rushed for 116 yards and had 23 receiving yards.

The biggest play of Gregory’s night was a 70-yard punt return late in the first half that put Oxford up 21-14 at the time.

“Roman’s a heck of a player, a great young man,” Cutcliffe said. “We feel like we have a great group of running backs and he’s done a tremendous job. Played with a lot of effort.”

In a game that was a breakout game for running back Gregory, it was also the defense of Oxford (6-3, 4-1) that helped turn the game around for the Chargers in the first half.

Oxford’s Demonte Mitchell stripped the ball from a Yellowjacket receiver and ran it back for the 30-yard takeaway and touchdown to put the Chargers up 28-14 at the time with over two minutes left in the first half.

Malaki Pegues was also dominant for the Chargers, getting into the backfield and disrupting the Starkville offense throughout the game.

“That was a huge stop (on fourth down) and again a lot of credit to them,” Cutcliffe said. “We talked about it at halftime that this is a Starkville team that’s come from behind consistently all year and gotten wins. We knew that we were going to get their best shot in the second half and I was proud of us responding and not really letting that tide win.”

Oxford completes their tough three-game road trip with a 2-1 record and now returns home for their final regular season game at Bobby Holcomb Field. The Chargers will host Grenada next Friday with kickoff set for 7 p.m.