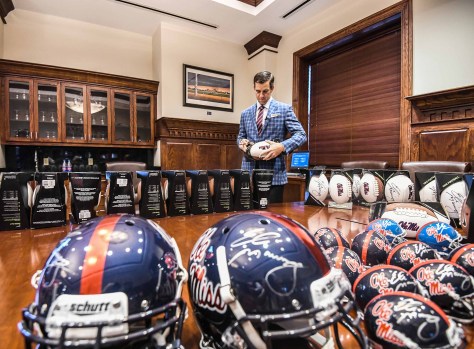 Eli Manning signs memorabilia at the Inn at Ole Miss, in Oxford, Miss., Thursday, October 21, 2021. Manning will have his number 10 retired at halftime of Saturday’s game against LSU. (©Bruce Newman) 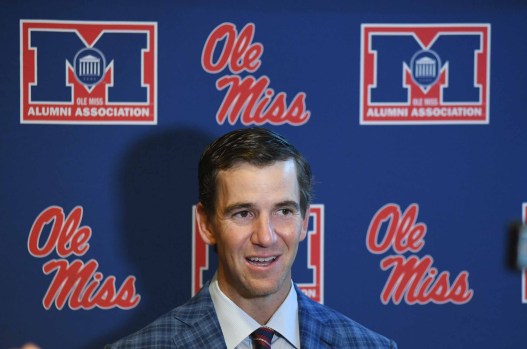 Eli Manning speaks at a media availability at the Inn at Ole Miss, in Oxford, Miss., Thursday, October 21, 2021. Manning will have his number 10 retired at halftime of Saturday’s game against LSU. (©Bruce Newman) 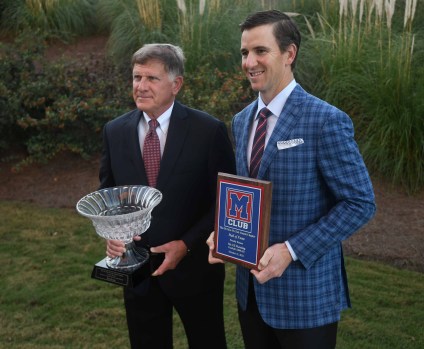 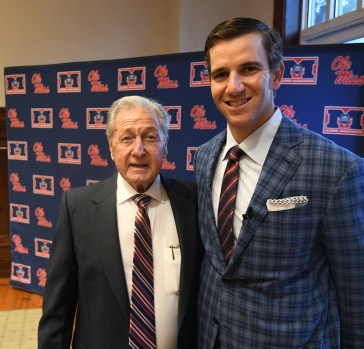 When Eli Manning came to Ole Miss, the goal was never to try and play well enough to one day have his jersey number retired. But come Saturday, that is exactly what will happen.

The former Rebel and NFL quarterback will stand at midfield during halftime of the No. 12 Ole Miss and LSU game and watch as his No. 10 becomes immortalized next to his father, Archie’s, No. 18 and Chucky Mullins No. 38 as only the third Rebel to have their number retired.

In June of last year, Ole Miss athletics director Keith Carter surprised Manning at his Oxford home to announce the football program will retire No. 10. It was originally planned to occur during the 2020 season at the Auburn game, but the COVID-19 pandemic and capacity restrictions put a pause on the ceremony until this weekend.

“Just excited,” Manning said. “I loved my time at Ole Miss and still, as a fan, love my team and root for my team. Grew up an Ole Miss fan coming to the games, coming to The Grove. Watching them on TV and then getting to play here for five years. To have my jersey retired up there next to my dad and Chucky Mullins is going to be special on Saturday.”

Since the announcement, Manning has had over 16 months to process and gather his emotions for what to expect on Saturday. The weekend’s festivities began on Thursday as Manning was inducted into the M-Club Hall of Fame at The Inn at Ole Miss. He is also going to lead the football team down the Walk of Champions on Saturday a couple hours before kickoff.

A lot of that time was spent in Lafayette County as Manning said he and his family waited out a good portion of the start of the COVID-19 pandemic in Oxford. The pandemic occurred in March, just a couple months after he announced his retirement from the New York Giants and the NFL.

Adjusting to life after football was then compounded with having to then live through lockdown and quarantine.

“I think I figured it out,” Manning said of adjusting to retirement life. “It was a little bit different. I retired in February and basically in March a pandemic hit. So I was quickly teaching three girls school every day and then a one-year-old running around. It wasn’t the easiest thing. … Enjoyed being with the family (in Oxford) did bike riding through campus and I still knew how to get into the stadium. I have a secret source to get into the stadium and did some bike riding through the stadium and threw some passes on the field to the kids and try to find a way to enjoy that time.”

Manning has also found ways to keep himself busy post football by still being involved with the Giants organization, a new show on ESPN+ and teaming up with his brother, Peyton, calling Monday Night Football on an alternate broadcast this season.

While Manning was discussing his present and living in the moment of what this weekend holds, he was also reflective of his time at Ole Miss.

In his four years as a starter for the Rebels, Manning completed over 60 percent of his passes for 10,119 yards and 81 touchdowns. He capped his time at Ole Miss, finishing third in the 2003 Heisman Trophy voting.

Despite all his on the field accomplishments, and there are plenty to be proud of, Manning only had one goal in mind when his career was done and he hung up his helmet for the final time.

“I hope my parents are proud of me,” Manning said. “I think they’ll enjoy that day. I know the way they feel about Ole Miss. My senior year, I thought my mom was going to enroll back in school (because) she was here so often. They love coming back here and even these last 17 years I’ve been away they still come back and have their place here. (They) love Oxford, love Ole Miss. … It is a special place for our family.”