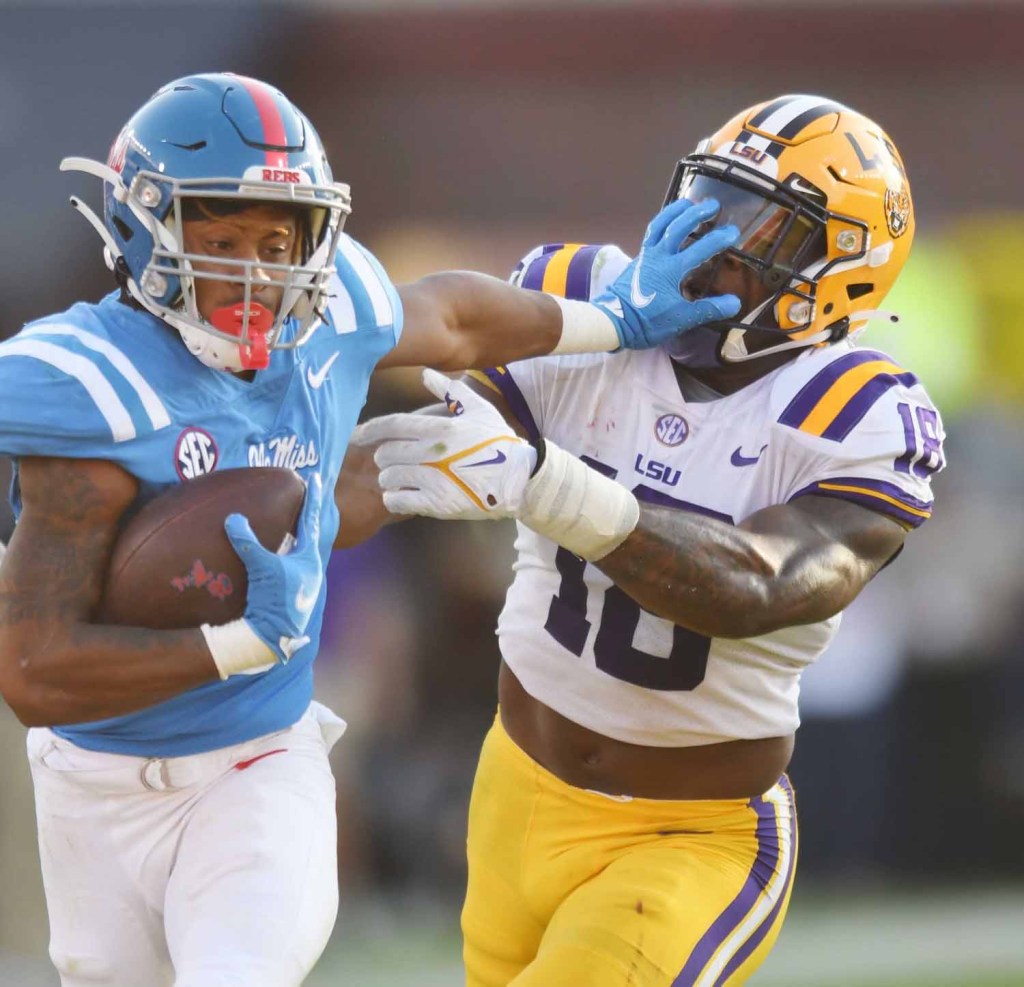 Ole Miss running back Jerrion Ealy gives a stiff arm to LSU linebacker Damone Clark (18) during a run in their game at Vaught-Hemingway Stadium on Saturday. The Rebels won 31-17. (Bruce Newman)

Sitting in his postgame press conference on Saturday, Ole Miss head coach Lane Kiffin encapsulated the last month of their season with one statement.

“They find a way to win. The stars seem to change every week,” Kiffin said. “You don’t know who they’re going to be in each game. Which is a little bit different. This is more people stepping up in different spots.”

The statement rang true as the No. 12 Rebels enjoyed a rare comfortable 31-17 win over LSU at Vaught-Hemingway Stadium. It was the first win for the Rebels (6-1, 3-1 Southeastern Conference) since beating the Tigers in Oxford in 2015. Saturday’s win also made Ole Miss bowl eligible.

On Monday, Kiffin announced quarterback Matt Corral was hurting and in “bad shape” coming off the Rebels win over Tennessee last week in Knoxville. Speculation abounded all week if the considered Heisman Trophy frontrunner would play this week, or sit out for an undetermined amount of game.

The speculation was quickly squashed ahead of Saturday’s game as Corral was seen warming up with the rest of the quarterbacks and and then announced as the starting quarterback.

Corral finished the game with a pedestrian 185 passing yards and a touchdown, completing 70 percent of his passes (18-of-23). With an injured, ankle, Corral ran for another 24 yards and a score on 12 attempts. He also caught his first pass of his career, which was thrown to him by Dontario Drummond, for 19 yards.

“I definitely think this team is bridging to be from good to great” Corral said. “It’s easy to be a good team, but it’s hard to become that great team because you need all three phases to do their job. … Defensively, you saw the showcase that they put on. We’re finally starting to put it together and it doesn’t matter who’s out there. We’re going to make it work.”

While Corral did play, he was still without weapons in Jonthan Mingo and Braylon Sanders. Both were on the sideline Saturday with Mingo on crutches and a boot while Sanders was wearing his jersey and in street clothes.

The next man up mentality and approach that Kiffin spoke of on Monday, acknowledging the offense was banged up entering this week, was evident with receiver-turned-defensive back Miles Battle found himself lining up on once again with the offense. Freshman JJ Henry also saw playing time out wide.

After having a quiet start to his season, Ealy was a player that Kiffin mentioned during the week that would need to step up and carry more of a load. Ealy answered that call, rushing for 97 yards and a touchdown on a touchdown.

“I think he opened his stride up,” Kiffin said of Ealy. “I think he had not been doing that and stomping his feet. I told him this week, ‘Hey, you’re a speed back and you’re not playing like it. You’re not cutting it loose.’ … That’s what we were hoping would happen and he seems to be back and it’s at the right time. Without these receivers, these guys have to step up.”

Snoop Connor rushed for 117 yards 14 carries and Henry Parrish, Jr. rushed for 32 yards and a touchdown.

Coming off back-to-back weeks where the defense had to survive the final play of the game in wins over Arkansas and Tennessee, Saturday’s game had a calmer feel in the final quarter.  The Tigers 17 points tied with the Austin Peay game on Sept. 11 as the lowest point total allowed by the defense this season.

LSU (4-4, 2-3) took a 7-0 lead off their first possession of the game, but did not score again until a Cade York field goal midway through the fourth quarter. In the two quarters in between, the Rebel defense recorded five sacks and forced four fumbles, recovering two of them.

“We’re playing better,” Kiffin said. “When you slow down an offense like that, your guys can do a better job of pass rushing as you saw today. … It’s fun to be the head coach when your defense is playing good. You can slow things down. You don’t have that feeling like you have to score every time.”