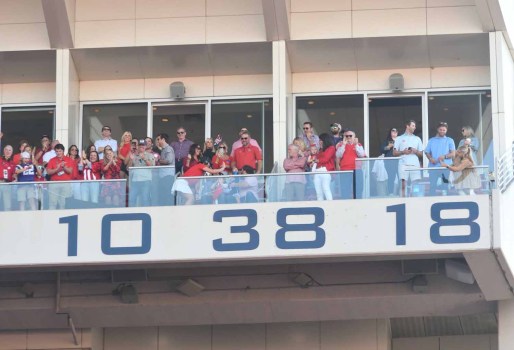 Eli Manning’s No. 10 is revealed next to his father, Archie’s, No. 18 and Chucky Mullins’ No. 38 during his jersey number retirement ceremony at Vaught-Hemingway Stadium on Saturday. (Bruce Newman) 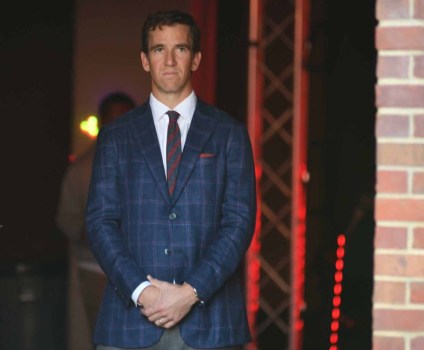 Eli Manning waits in the tunnel and watches the video board ahead of his jersey number retirement ceremony at Vaught-Hemingway Stadium on Saturday. (Bruce Newman) 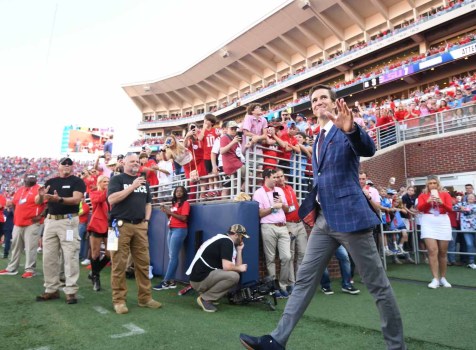 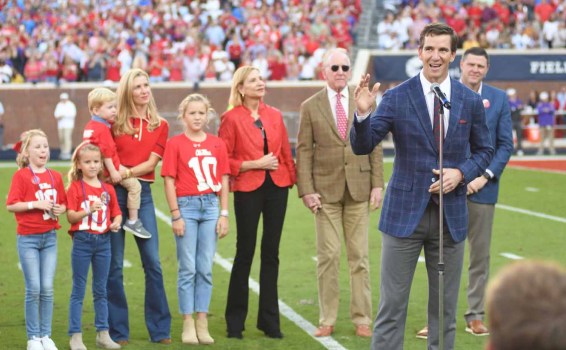 Eli Manning speaks to the crowd during his jersey number retirement ceremony at Vaught Hemingway Stadium on Saturday. Manning was joined by his parents, Archie and Olivia Manning (far right) and his wife, Abby, and four children. (Bruce Newman)

Eli Manning and No. 10 are now forever immortalized in the Ole Miss football program.

During a ceremony at halftime of the No. 12 Ole Miss and LSU game at Vaught-Hemingway Stadium on Saturday, Manning saw his jersey number placed next to his father, Archie Manning, and Chucky Mullins.

Following a video that highlighted his career as a Rebel, Manning walked out of the tunnel to thunderous applause and stood with his parents, wife Abby and his four children.

Manning addressed the sold-out crowd at Vaught-Hemingway, thanking them for their support during his five years in Oxford.

“I appreciate all of my Ole Miss family here that have supported me during my career,” Manning said. “This day could be possible without the unbelievable coaches and players that I got to compete with on this field every Saturday. I’d like to thank my parents, my wife Abby, my kids and all of my family for their love and support during my football journey. Seeing my No. 10 hang up there next to my dad will be one of the greatest moments of my life. Thank you, I love Ole Miss. Hotty Toddy.”

In his four years playing, Manning had a 60.8 completion percentage for 10,119 yards and 81 touchdowns. During the 2003 season, Manning finished third in the Heisman Trophy voting.

John Rhys Plumlee currently wears No. 10, but is allowed to continue wearing it through the rest of the season.