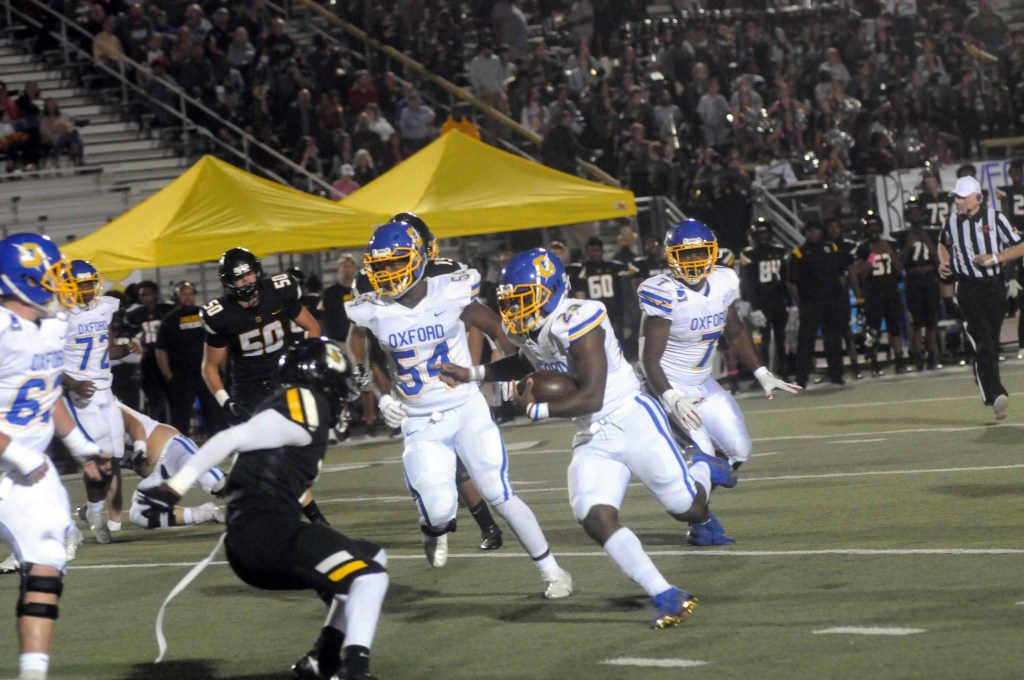 The final two weeks of the regular season is here with playoff pushes and jockeying for seeding the key priority for teams.

Water Valley concludes its regular season a day early on Thursday due to the statewide referee shortage causing games to be split between Thursday and Friday the next two weeks.

For Oxford, the Chargers finally return home after a three-week road trip where they went 2-1. Lafayette also returns home, and stays there, for the remainder of the regular season after coming away with a key road win last week.

For the first time in eight years, Oxford brought home the Little Egg Bowl trophy after knocking off No. 4 Starkville 42-35 last week. The Chargers (6-3, 4-1 Region 2-6A) handed the Yellowjackets their first loss of the season and stayed in the race for a another region title.

This week Oxford returns to Bobby Holcomb Field for their final home game of the regular season, hosting Grenada. The two Charger teams are not strangers to each other, playing the last five years. Grenada (5-4, 1-4) is also a newcomer to 2-6A and Class 6A altogether, moving up following last year’s reclassification by the MHSAA.

Since starting the series back five seasons ago following a four-year break, Oxford has won all five games including a first round playoff victory in 2016.

A win on Friday would position Oxford with the chance to lock up their first Region 2-6A title next Thursday with a win at Madison Central. Having only played four home games all season, the chance to get another game at home in the postseason would be ideal for the Chargers.

“Our job is to be play better next week than we played this week,” said Oxford head coach Chris Cutcliffe following the Starkville win. “If you’re not, there’s an old saying in coaching you’re either getting better or you’re getting worse. You can’t stay the same and it’s so true. So, our job is to hit the practice field and get better. That’s what it boils down to.”

Last Friday, Lafayette traveled to Cleveland and came away with a tough win over Cleveland Central to keep pace in Region 1-5A. The Commodores (7-2, 4-1 1-5A) rallied to score 21 unanswered points to defeat the Wolves and remain a game behind West Point.

With their road games in the books, Lafayette now concludes the regular season at the friendly confines of William L. Buford Stadium. The two-game homestand starts on Friday with 1-5A newcomer Greenville coming to town, marking the first meeting between the two programs.

The season has not gone well for the Hornets (1-5, 0-5) with a currently winless streak in region play. The lone win on the year for Greenville was a 26-16 victory over Greenwood in their season opener on Sept. 10. Greenville was forced to cancel their first two games of the season due to COVID-19 issues.

Lafayette is currently sitting in second place behind the Green Wave. With a victory this week and then a win over Lake Cormorant next Thursday in their regular season finale, the Commodores will wrap up the No. 2 seed in the region and secure a first round home playoff game in two weeks.

It is a short week for Water Valley, who loses a day of preparation after coming off their win against Booneville last Friday.

The Blue Devils (5-3, 2-1 1-3A) essentially secured the No. 2 seed in Region 1-3A with their win over the Blue Devils of Booneville, but a win at Alcorn Central on Thursday will make it official. Just like Lafayette and Greenville, this is a first time meeting between the Blue Devils and the Bears.

Region play has not gone well for Alcorn Central (4-5) as they are currently winless in 1-3A at 0-3. A loss will keep them sitting on the outside looking in of the five-team region and miss the playoffs.