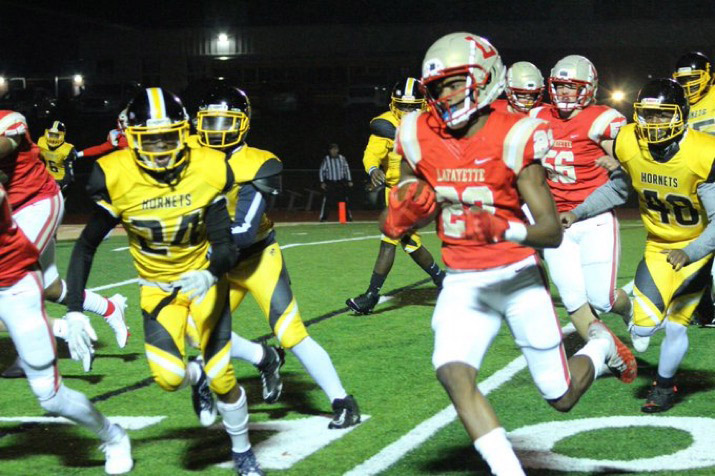 From the opening kickoff, it was evident that the Lafayette Commodores were more physical, quicker and simply better than the opposition.

Trikyus Woodall scored four touchdowns on the ground while the defense created negative plays with regularity in a 49-8 region win over the Greenville Hornets. While it wasn’t always perfect due to first half miscues, the Commodores did what they had to do in order to control their own destiny for a home playoff game.

“Turnovers and a few special teams miscues: you take those out and I thought we played really solid. We get a little better every day and I thought we continued to do that this week. We were able to play a lot of guys, so that’s always good. We’re getting ready for this final stretch,” LHS head coach Michael Fair said.

The dominance started on the first drive. Lafayette (8-2, 5-1 Region 1-5A) capped off a 10 play, 66-yard drive on running plays. DJ Burnett and Trikyus Woodall carried the ‘Dores down field with Woodall scoring the first of four TDs. Following a three-and-out, Woodall scored again from 15 yards out, giving Lafayette an early 14-0 lead with 5:11 left in the first quarter.

After forcing a turnover on downs, the ‘Dores looked to score again, but a bad snap handle near the goal line gave Greenville the ball in the shadow of their own goal post. DJ Burgess immediately gave the ball back to his offense after recovering a fumble inside the Hornet 10-yard line and Dee Gipson scored one play later from eight yards out. The Hornets proceeded to fake a punt on their next play and Woodall made them pay with a seven yard score. Following a missed PAT, Lafayette had a 27-0 lead with 9:08 left in the first half.

After Charlie Fair threw his first touchdown pass of the game to Will Dabney, Greenville proceeded to take the ensuing kickoff 76 yards to the house, preventing the shutout and making the score 34-8 following a two-point conversion. The Hornets quickly got the ball back with a successful onside kick, but Kylan Egerson came up with an interception to end their plans of points. Lafayette would again put the ball on the ground on their next drive, but would later score before halftime with a fourth Woodall touchdown run.

In the first half, Greenville had -7 yards of offense alone while Lafayette had a 42-8 lead. There was a running clock for the reminder of the contest. Jeremiah Tanner had one of the few second half highlights with a 25-yard pick-six while the ‘Dores cruised on the rest of the way for their fifth straight win.

The Commodores will remain home for their regular season finale next week, hosting Lake Cormorant in a crucial region showdown. Lafayette will look to secure their first home playoff game as a member of class 5A after having those hopes quashed the last two years by Thursday’s opponent. Kickoff is set for 7 p.m.

“There’s a lot to play for and that’s why we do this. If you’re able to play meaningful games through the first of November, you’re doing something pretty good. We like where we are. We just need to finish it out,” Michael Fair said.