No. 10 Ole Miss falls at No. 18 Auburn as offense sputters in second half 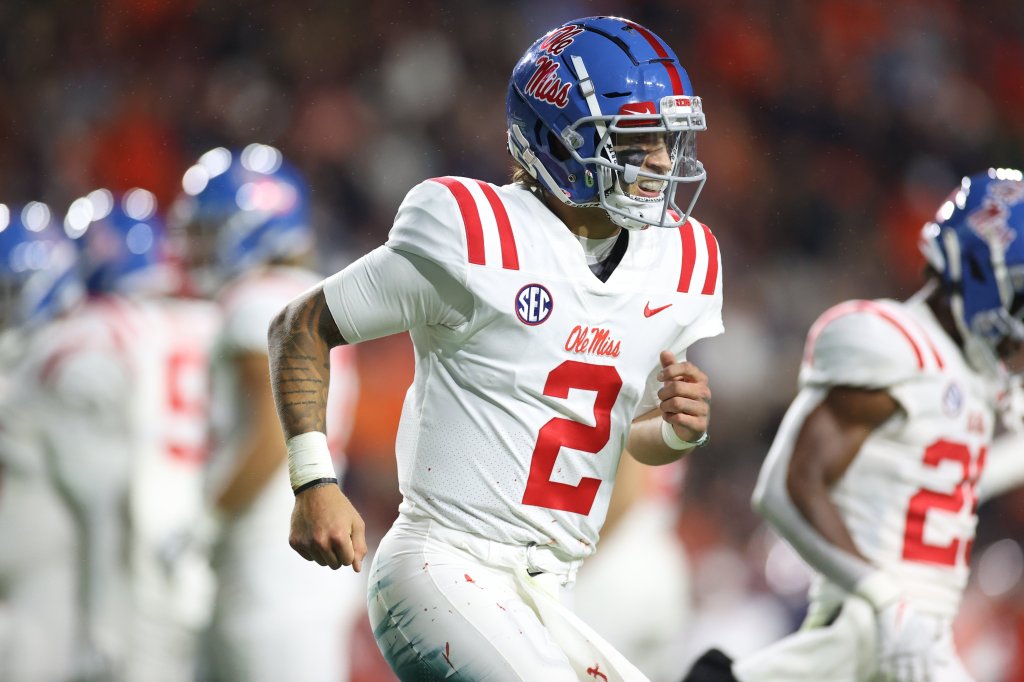 Ole Miss quarterback Matt Corral (2) during a game against Auburn at Jordan-Hare Stadium in Auburn, Ala. on Saturday, Oct. 30, 2022. Corral is projected as a second round pick in next week's NFL Draft according to ESPN's latest mock draft. (Joshua McCoy/Ole Miss Athletics)

AUBURN, Ala. — There were multiple scares on the Plains for No. 10 Ole Miss on Saturday, but the worst of all might have been the performance of the offense.

A beat up quarterback, depleted offense, multiple penalties and questionable decisions on fourth down spelled disaster for the Rebels in their 31-20 loss to No. 18 Auburn at Jordan-Hare Stadium. The Tigers won the sixth straight in the series, dating back to the 2016 season.

On Halloween eve, the biggest scare for Rebel head coach Lane Kiffin was seeing Matt Corral suffer yet another injury to an ankle. Corral went down late in the first quarter and exited the game.

Backup quarterback Luke Altmyer played on two drives, with the second one resulting in a touchdown.

Corral missed nearly seven minutes of game time after being carted off the sideline to the locker room. He then returned to the field without the aid of the cart and helmet in hand and tried to run onto the field in between a plays, but Kiffin then called a timeout to allow Corral back in.

“I couldn’t feel my ankle. I heard it pop,” Corral said. “Honest to God, I don’t know what it was. I just couldn’t feel it for like five minutes. Got it back and I told them if the x-ray was negative I’m going back in. That was it. No excuses for not executing. If I wasn’t able to execute I would not have been back in. I’m expected to make those plays that I missed and the ones I usually make I didn’t. That’s on me.”

Corral fought through whatever pain he was feeling and played the rest of the game, though it was clear he was not 100 percent. He completed 21-of-37 passes for 289 yards and also rushed for 45 yards and a touchdown on 10 carries.

With Jonathan Mingo out and Braylon Sanders dressed out but did not play, Corral was down to Dontario Drummond — the last of his three starting receivers at the beginning of the season. Drummond then went down with an injury and did not return to the game, leaving Corral with limited weapons on the field.

The Heisman Trophy candidate threw his second interception of the season at a crucial time, trailing by 11 points with less than nine minutes remaining in the game. With a first down inside Auburn’s 20-yard-line, Corral scrambled to avoid a sack and then threw across his body to the end zone where it was picked off by Auburn’s Jaylin Simpson.

“That’s very unlike him with the interception,” Kiffin said of his quarterback. “It’s really a play he had not made since last year like that. He’s human. He made one and it’s unfortunate.

“I think that’s a product of forcing. You get frustrated when all of a sudden we’re having three-and-outs to start the second half and that’s a problem. You’re not getting a lot of plays made around you. It’s hard not to press.”

A potent offense struggled to put points on the board with Corral not at full strength, but also due to a lack of success in the red zone and on fourth down. The Rebels (6-2, 3-2) went 1-for-4 on fourth down attempts, all inside the Auburn 20.

Kiffin opted to instead try to convert the fourth downs and try to potentially score a touchdown instead of opting for short-range field goals. Kicker Caden Costa converted on a 49-yard field goal try in the third quarter.

“(Auburn) did a really good job, but it wasn’t any special good defense or anything,” Kiffin said of their red zone struggles. “When you get the in red zone things tighten down. You’re going to have tight windows and you have to make good throws and you have to make good plays. I can sit here and say we should’ve kicked field goals, but we’ve made (fourth down conversions), more than anybody in the country. When it doesn’t work it doesn’t work.”

The Tigers first five second half drives ended in a miss field goal, punt, punt, a made field goal and a fumble. The Rebel defense did all it could to give the offense chances in the second half, but the hole created in the first half was too much to get out of.

Ole Miss stays in Mississippi for the month of November. They return home for a three-game home stand on Saturday, starting with Liberty and the return of Hugh Freeze to Oxford. Kickoff is set for 11 a.m. CT.