Injuries continue to pile up on offense for No. 15 Ole Miss 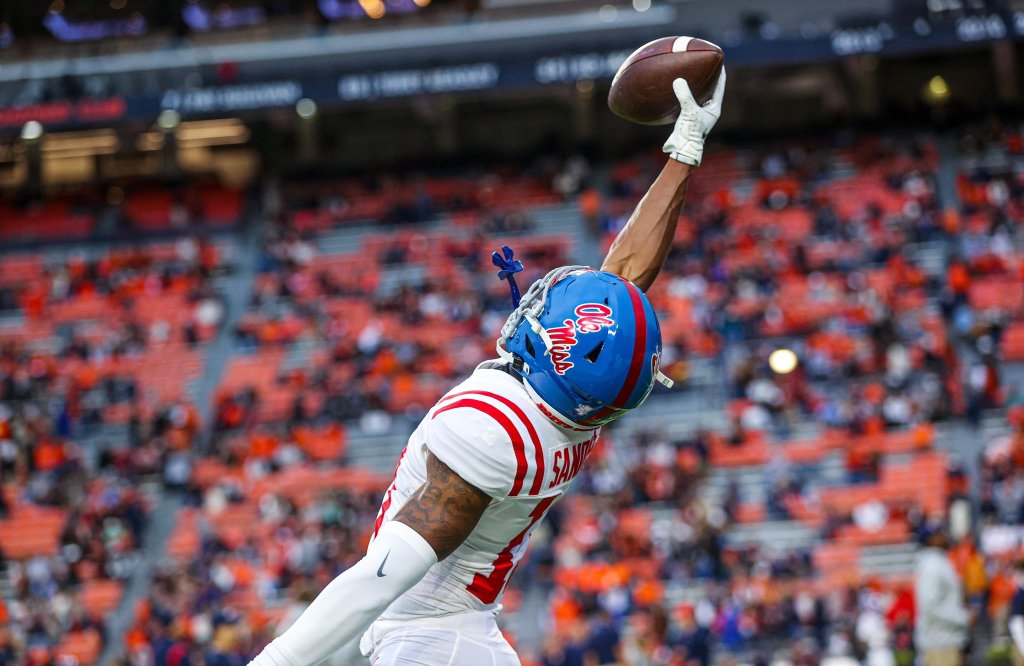 Ole Miss receiver Braylon Sanders makes a catch during warm ups ahead of the Auburn game at Jordan-Hare Stadium on Saturday. Sanders, who is still recovering from an injury, did not play in the game and is one of several players on offense dealing with injuries. (Joshua McCoy/Ole Miss Athletics)

Bumps and bruises up and down a roster are a common thing for a football team through eight games but Ole Miss, particularly its offense, is experiencing an uncommon occurrence.

The No. 15 Rebels (6-2, 3-2 Southeastern Conference) have an offense that is spending more time in the trainer’s room than on the practice field. Quarterback Matt Corral is dealing with an ankle that has taken two rough hits in the last three weeks and his starting three wide receiver are currently out with injuries. Corral left the game on Saturday and was carted to the locker room before returning after missing nearly seven minutes of game time.

Corral did not practice on Monday, according to head coach Lane Kiffin

Kiffin noted on Monday during his weekly press conference that the amount of injuries he is facing on the offensive side of the ball is unprecedented in his coaching career.

The Rebels do step out of SEC play for a week, hosting Liberty (7-2) for their final non-conference game of the season.

“(Offensive coordinator Jeff) Lebby and I, we said, ‘Have you ever experienced anything like this?’ and I said, ‘Not on that side of the ball,'” Kiffin said. “For whatever reason, they’re just all on offense. Even some that are playing aren’t close to 100 percent. So yeah, I would like this to be some opponent we’ve never heard of before, you know, that didn’t have a first-round draft pick quarterback, would be nice. … It’s basically like having another SEC game.”

Ahead of their game at Auburn on Saturday, it looked like maybe the offense was starting to get healthy as Braylon Sanders was dressed out and seen doing warm ups and stretching with the team. Sanders stayed suited up but never took the field, standing next to Kiffin during most of the Rebels possession on offense.

Dontario Drummond suffered a leg injury during the game on Saturday and left for a time. He was listed as questionable to return, but did come back onto the field for a play or two but in more of a decoy role.

Considered one of the top receiving corps in the SEC, if not the country, the Rebels are now without Drummond, Sanders and Jonathan Mingo, who’s been out since the Alabama game with a leg injury with no status update provided.

“Braylon tried to go and just watching him and talking to him, he was like, ‘Well I can go if I can cut off this leg, but I can’t cut off this leg.’ Well, we’re not doing that. So, that’s why he basically didn’t play. Very difficult decision for us on the road against really good players on defense to have that many guys out (on offense). Some guys stepped up and made some plays.”

The offensive line is also not at full strength the rest of season after Ben Brown announced last week he had season-ending surgery to repair an injury suffered during the fourth quarter of the Tennessee game.

Ole Miss and Liberty are scheduled to kickoff at 11 a.m. CT on Saturday. The game will air on SEC Network.