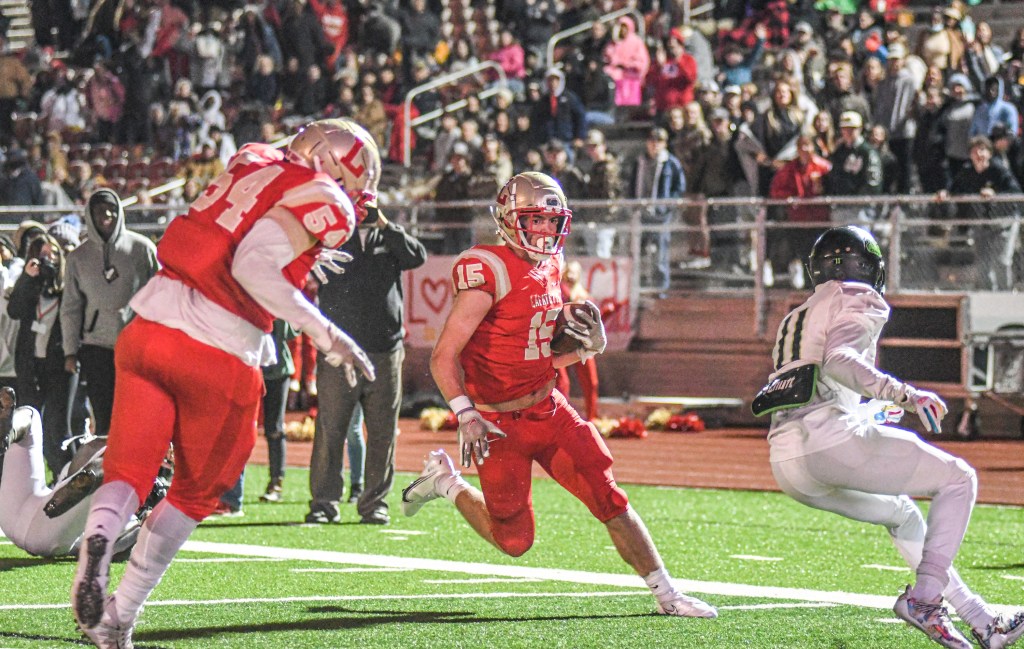 Lafayette’s Cooper Mitze (15) scores on a s screen pass against Lake Cormorant at William L. Buford Stadium on Thursday. The Commodores won 28-19 to secure the No. 2 seed out of Region 1-5A and will host a first round game in the 5A playoffs next week. (©Bruce Newman)

For the first time in five years, Lafayette’s football team will play at home in the postseason.

After getting punched in the mouth early by Lake Cormorant, the Commodores rallied for the 28-19 victory at William L. Buford Stadium in both team’s regular season finale on Thursday. The victory clinched the No. 2 seed out of Region 1-5A and a home playoff for Lafayette (9-2, 6-1 1-5A), who closed out the season on a six-game winning streak.

The Gators (6-5, 4-3) jumped out to a quick 13-0 lead late in the first quarter after two 47-yard touchdown passes by quarterback Telvin Amos. The two passes were separated by an onside kick that Lake Cormorant recovered.

“It’s just one of those things where it happened real fast,” said Lafayette head coach Michael Fair. “I just loved how our kids responded. They never blinked. They just went out there and did their job. There was no pointing fingers on the sideline. Our coaches just got to coaching.”

Lafayette regrouped quickly and answered with a heavy dose of running back Jay Reed and mixed it up with quarterback Charlie Fair in the passing game.

After a turnover on downs to start the second quarter, the Commodore offense rattled off three consecutive scoring drives to take the lead, and keep it, as part of 28 unanswered points.

Reed rushed for 168 yards and a touchdown on 28 carries while Fair completed 7-of-10 pass attempts for 126 yards and three touchdowns. Kylan Vaughn, Cooper Mitze and Makyi Reed-Jones each had a touchdown reception.

The second half was not as smooth for Lafayette, offensively, with a couple of drives starting at their one-yard-line, which did not allow for any momentum to be sustained from the first half.

“We scored on three consecutive drives and I thought that was huge,” Fair said. “We come out after halftime and score on the opening drive again. Then we got a little conservative, but field position killed us. When you start from your one on back-to-back drives it limits what you want to call, especially with the lead. We were trying to do it right.”

Despite giving up two big touchdown passes early, Lafayette’s defense continued to show why they are one of the toughest to score on in 5A, if not all of the state.

Lake Cormorant found themselves in good field position, including inside Lafayette’s 10-yard-line, a few times late in the game but were unable to score any points. The Commodore defensive front resided in Lake Cormorant’s backfield all night, pressuring Amos out of the pocket and forcing him to make a play.

“(Amos) is a warrior,” Fair said. “We were chasing him all night long and our guys are worn out from chasing him. He did a great job getting plays off and making plays when there wasn’t must there, but our defense is pretty special. It’s fun to sit back to watch.”

Lafayette will host Holmes County Central (6-5), who earned the No. 3 seed out of Region 2-5A, next Friday in the first round of the Class 5A playoffs. Kickoff is set for 7 p.m.