Oxford upended by Madison Central, miss out on region title 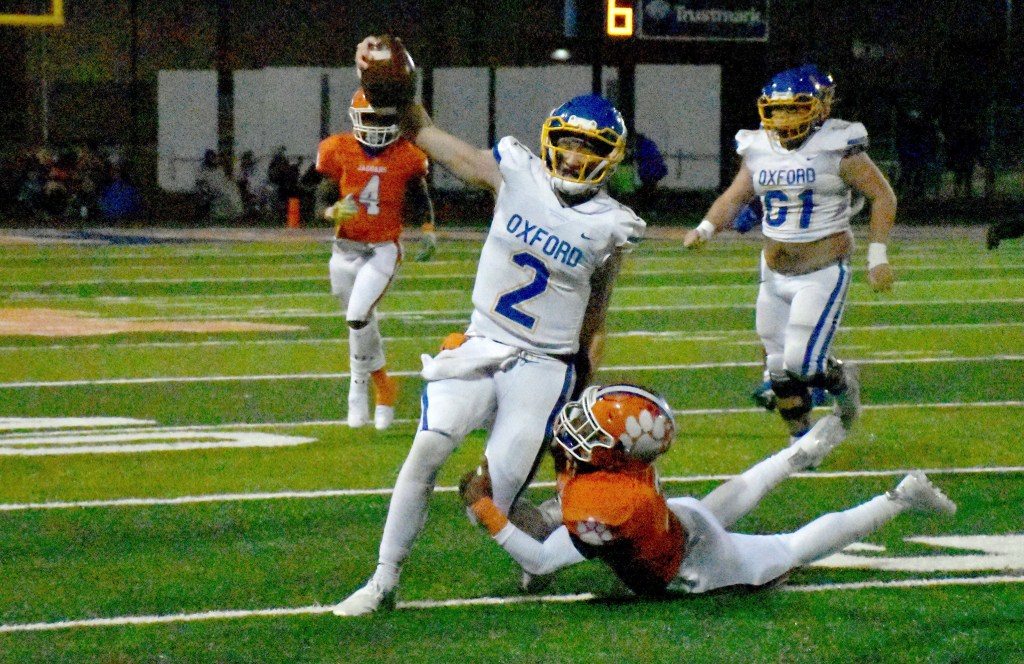 Oxford’s Trip Maxwell (2) runs for a first down against Madison Central at Madison Central High School on Thursday. The Chargers lost 48-7 and will be the No. 4 Seed out of Region 2-6A in next week’s 6A playoffs. (Jared Redding)

MADISON — With a region title at stake Thursday night, very little went right for Oxford and they’ll have to remain road warriors because of it. The Chargers committed four turnovers and surrendered 470 yards of total offense in a 48-7 defeat at the hands of Madison Central.

The Chargers struggled to find an answer for Madison Central’s Vic Sutton and Robert Dumas Jr., who combined for six total scores on the night.

“Obviously this isn’t what anyone wanted tonight, but a lot of credit goes to Madison Central. They’re a great, talented team. We just have to put it behind us and get ready for the playoffs,” OHS head coach Chris Cutcliffe said.

Roman Gregory started things off with a bang, rushing for 51 yards on the first play. However, a Michael Harvey fumble ended plans for an early score. Alex Sanford recovered a Jaguar fumble on the following drive, but another Harvey fumble killed the Charger drive again.

“I felt like we were moving the ball early in the game, but those turnovers got us behind the eight-ball. When you do that against a really good football team, they’ll make you pay,” Cutcliffe said.

Both teams struggled to secure the football right out of the gate, but Madison Central was the first to take advantage. After Harvey’s second fumble, Dumas raced to the pylon and scored from nine yards out to give his team a 7-0 lead with 4:36 left in the opening quarter. Oxford proceeded to go three-and-out offensively while Sutton later turned a 3rd-and-16 into points. Sutton found Isaiah Spencer over the middle for a 30-yard touchdown strike to conclude the first quarter with a 14-0 lead.

The Jaguars scored on their next two possessions with Dumas and Sutton scoring on the ground. Their defense took care of the rest as they went into the locker room with a commanding 27-0 lead. Madison Central had a 317-91 yards advantage over the Chargers.

Things didn’t get any better for the Chargers as they allowed the second half kickoff return by B.J. Washington to reach the Oxford 23-yard line. Two plays later, Deandre Pullen scored a 17-yard touchdown run to make it 34-0 in Madison Central’s favor. Trip Maxwell proceeded to throw an interception to Chris Berry on the ensuing drive and Dumas made it a 41-0 Jaguar lead just over two minutes into the third quarter.

Maxwell finally got the Chargers on the board with 4:42 left in the quarter, throwing a dart to Dane Harmon for a 43-yard score. Dumas proceeded to score a 43-yarder of his own for his fourth touchdown run of the game to put an exclamation point on a dominant night.

With the loss, Oxford clinches a No. 4 seed for next week’s MHSAA Class 6A playoffs where they will travel to Batesville to face Region 1-6A champion South Panola. Kickoff is set for 7 p.m.

“It’s a big challenge going on the road in the playoffs. We have to put this behind us quickly,” Cutcliffe said.