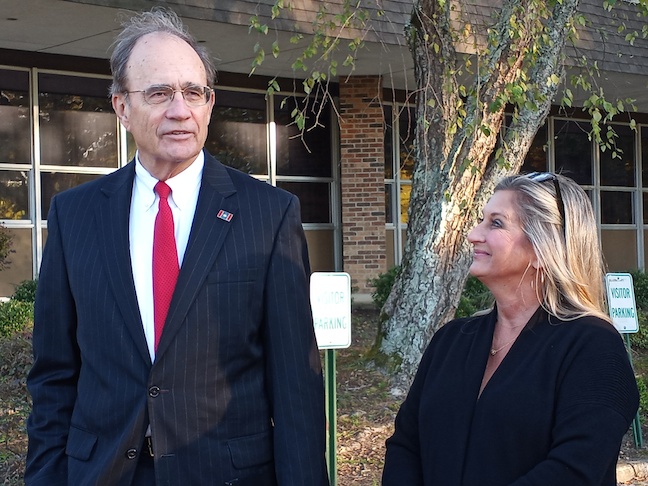 The meeting came after a recent call by Tannehill and other Lafayette County leaders to the Mississippi Department of Transportation to provide a safety plan in the wake of two fatal wrecks in early October. Three people were killed within a 24-hour span between the Highway 7 and 9 roundabout project and the Highway 7 and County Road 401 project.

“This is a conversation that’s been going on for 25 years and it’s a priority that seems to keep getting bumped at the state level,” said Tannehill. According to Tannehill, MDOT considers other projects a priority. The budget for the Highway 49 project went over by $150 million, but they have not invested financially in a project for Highway 7 that will reduce the safety issues.

“I believe that a partnership between the Legislature, MDOT and cities and counties that Highway 7 goes through is very critical in securing some funding that I think will be needed for this project to happen,” said Tannehill.

Approximately 16,000 drivers pass along Highway 7 per day making it one of the highest traffic counts in the state for a two-lane road. Oxford has a population of approximately 28,000 but about 60,000 travel into the city daily and at most 300,000 people will show up on any given weekend, which places a burden on the city and Lafayette County.

“With the population increase we’ve had in Lafayette County which has been the largest county increase in the state, we have the dramatic traffic increase we have through [Highway 7],” said Boyd.

More than 800 accidents have been recorded on Highway 7 within the Oxford city limits since 2014 and there have been 16 deaths in that area of Highway 7 in question since 2015. Between 2014 and 2018, a large majority of the most dangerous sections of Highway 7 were not within Oxford’s city limits.

In the aftermath of the two wrecks, local leaders signed a joint request letter calling for an immediate plan from MDOT to make the highway safer.

“I think for capacity reasons four-laning is the only way to help with these capacity issues, but there’s safety issues at every intersection along the way,” said Tannehill. “Each of those have to be addressed differently depending on what traffic counts are and accident reports. I do believe there are issues from the 7-6 Intersections down to the 7-9 split.”

Two years ago, MDOT estimated the project to change 6.5 miles of Highway 7 from a two-lane to a four-lane would cost $110 million. Local leaders have requested financial assistance from Governor Tate Reeves, the Mississippi Legislature and the Mississippi Department of Transportation.

The city of Oxford has already spent close to $7 million on utility relocations and right-of-ways in preparation for the project. The leaders hope MDOT will provide the federal funding needed to get the project underway and they are willing to match the cost.

“The state has done well the last few years and the state has enough money to do a match,” said Hosemann. “$110 million dollars sounds high. If it was high before then after this year it may not be because we’re having massive inflation. The other thing is with all the water and sewer, we have capacity issues that affect the timeline, but with the right-of-way done and all the utilities moved that should put us way forward.”