Strong start by defense lifts No. 15 Ole Miss past Liberty 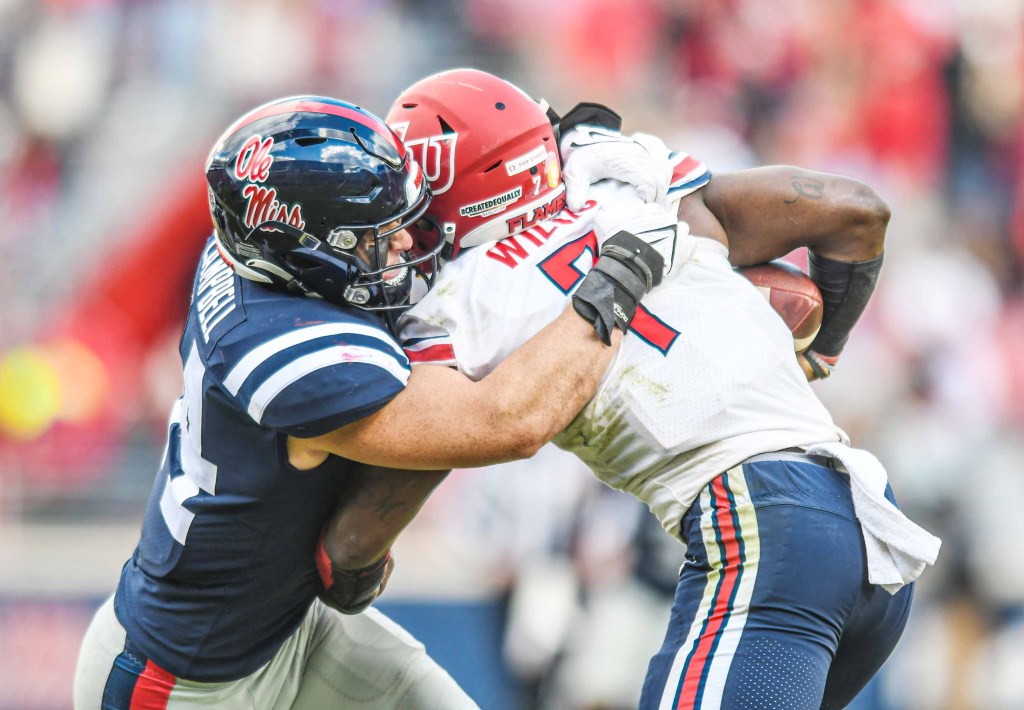 A tale of two halfs for the Ole Miss football team for a second straight week, but it resulted in a different outcome than a week prior in Auburn.

Off the strong performance by its defense in the first two quarters, the No. 15 Rebels defeated Liberty 27-14 at Vaught-Hemingway Stadium on Saturday in Hugh Freeze’s return to Oxford.

Coming into the game, Liberty quarterback Malik Willis and Ole Miss quarterback Matt Corral were the focus of attention — over 20 NFL scouts were in attendance to take in the game.

The Rebel defense made sure that Willis did not put on a show, sacking the quarterback a total of seven times in the first half and finishing with nine. Willis also threw three interceptions, including one that A.J. Finley picked off to seal the victory for Ole Miss (7-2) in the final minute.

Finley had two interceptions on the game. Sam Williams recorded 2.5 sacks, setting a new school record for sacks in a season with 10.5. The previous record was 10 sacks held by Marquis Haynes (2015) and Greg Hardy (2007).

“We tried to get them up the same way we did for the start of the game in the second half and didn’t do that. Really played a bad second half,” said Ole Miss head coach Lane Kiffin. “That’s always challenging when the game goes so well. At halftime you’re (leading) 24-0 versus what they don’t think of as an SEC team and you loosen up. That’s what we did.”

With Willis not having a strong outing in front of NFL scouts, Corral continued to put up big numbers despite dealing with an injured ankle.

Corral completed 20 of 27 pass attempts for 324 yards and a touchdown. He also ran the ball six times but was more conservative, finishing with nine yards after a couple of sacks in the fourth quarter.

After dropping a wide open pass in the first quarter, Dannis Jackson became a reliable target for Corral. The junior had six catches for a game-high 126 yards and a touchdown. John Rhys Plumlee finished with seven catches for 110 yards.

The ground game was effective in the first half, starting with Jerrion Ealy scoring on a 70-yard run on the second play of the game. Ealy finished with 115 of the Rebels 142 rushing yards and two touchdowns. No other player finished with more than 19 rushing yards.

While the offense was clicking in the first half, a large lead coming out of halftime provided potential for Ole Miss to give in to the temptation of letting off the gas pedal, which they did at times in Kiffin’s eyes.

“There’s some good stuff, but I mean just not finishing drives in the red zone,” Corral said the second half struggles. “We’ve just got to keep everything the same. We’re on a roll, don’t change. Just keep doing what we’re doing and play fast like we preach. I think that got a way from us a little bit and it’s just something we’ve got to fix.”

Ole Miss continues its final homestand of the season next week, hosting No. 13 Texas A&M on Saturday at 6 p.m. CT