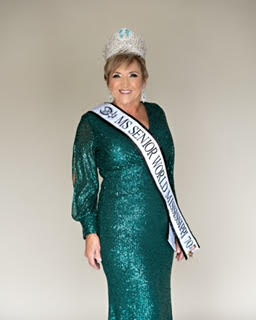 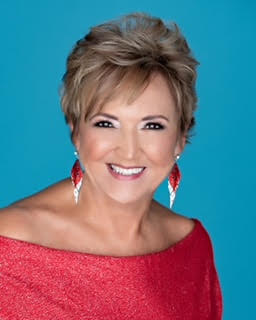 “I was pretty confident this year,” said East. “Practicing and I prayed. I just prayed to God saying, ‘Use me to speak how you would have me to speak and use my feet to move how you would have me to move,’ and I was never nervous at all. He was cheering me right through it all. I also had a lot of supporters, people who supported me and I want to thank every last one of them.”

According to East, MS Senior World executive producer Sherry Strother designed the event specifically for senior women aged 50-79 who want to participate and show the world what they have to offer. East experienced her first MS Senior World Pageant in 2018 and each year has given her great memories and even greater friends.

The women get together to boost confidence, have fun, make new friends, and allow them an outlet to share platform issues that are important to them with the other delegates and the world.

“We believe in women empowering women and we love to give back to others,” said East. “Helping others, doing for others, servicing others– that’s that this pageant is all about.”

East said her first heart is for senior citizens and she advocated for them during the pageant.

“I worked in nursing many years ago and when I was a younger woman I fell in love with senior citizens,” she said. “There are so many who are in nursing homes that are homebound and just don’t have family. I love to give back to senior citizens who really don’t have anyone.”

These senior ladies are very active in serving others and MS Senior World affords them a venue to share in a fabulous event where they are the center of attention. MS Senior World allows participants to show the world the value senior women bring to their communities and their states.

As a member of Oxford’s Silver Steppers, a line dancing group, East and her peers often perform once a month at nursing homes for the senior citizens.

MS Senior World Delegates underwent a 10-minute scored interview with judges from around the country. A judge asked East what part of Oxford she would show to him if she had a chance and she took the opportunity to gush about the town.

“I had plenty to say about how beautiful Oxford is,” she said. “The Square, the historical homes and the friendliness of our community.”

East said she admired Strother’s decision not to include a talent show and felt that it fit the occasion.

“We’re senior women,” said East. “We’ve done our talent. Our talent is what we have learned through life and what we can share with others to help them grow into good, mature and positive-thinking senior women.”

Delegates of the pageant enjoyed a festive tea at Martha’s Tea Room on Monday, Nov. 8, followed by Preliminary and Finals at the Mary C. O’Keefe Cultural Arts Center in Ocean Springs, MS on Tuesday and Wednesday, Nov. 9 and 10.

Delegates for the Ocean Springs-based pageant, which highlights accomplished senior women in their 50s, 60s and 70s,  also sought online votes through the “People’s Choice Award.” The competition allowed the public to vote for their  favorite delegate by donating to the pageant.

The winner received a guaranteed spot in the Semi-Finals in the age  category the contestant represented. Organizers stated a total of $12,000 was raised during the month-long campaign to purchase cases of outreach bibles that will be shipped locally or to various countries around the world, which is quadruple last year’s funds of about $3,000.

“It’s a great opportunity for senior women to enjoy dressing up, getting pretty and doing something for others,” said East. “It’s just a wonderful atmosphere and we love each other. We want to grow and get more people involved. It’s a rewarding experience.”

East plans to participate in MS Senior World 2022-23 Pageant as the Outgoing MS Senior World 70s and will be crowning the next winner who takes the honor as MS SENIOR WORLD 70s.