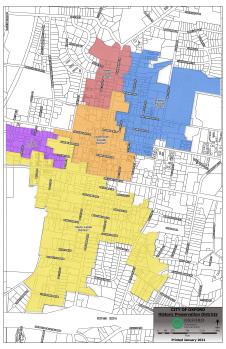 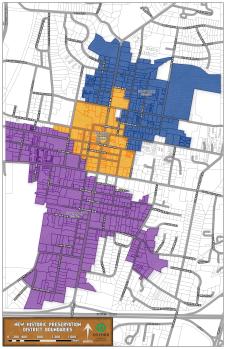 The new and proposed historical district boundaries for Oxford. The city of Oxford is working to modify local historic districts. If approved by the Board of Alderman, Oxford would change from five historical districts to three along with the removal of properties on the fringes of the map. (Photo: Oxford Historic Preservation Commission)

The city of Oxford is modifying the boundaries of the North Lamar, South Lamar, Jefferson Madison, and Depot local historic districts and has drafted an interactive map available to the public.

The city of Oxford has partnered with the Mississippi Department of Archives and History to re-survey Oxford’s local historic districts, with assistance from MDAH’s grants, to determine if the historical districts’ boundaries needed to be updated.

“Most of these were multi-unit type properties that were on the fringes of the district,” said Kenwright. “

When asked by Commissioner Joel Little if Kenwright opposed any changes, she said that she was in agreement with all the changes made. Kenwright said she liked having an independent consultant who had no attachments to the community and could make decisions objectively regarding boundaries and properties.

“It was solely based on the architectural integrity,” she said. Kenwright said the scale of the historic districts is protected under the Conservation Overlay Zoning area and is not much of a concern.

City staff has notified property owners through letters of the modifications to the district’s boundaries. The Historic Preservation office has not received responses objecting or supporting the changes.

The Oxford Historic Preservation Commission has debuted a draft of the historic district properties survey for public viewing. The map includes a description of the property from the survey including a photograph of the house, a description of its architecture and historical information.

“The changing of the boundaries and this map —it’s all sort of an effort to be more transparent with people who live in the historic district or own a historic property,” said Kenwright. “We have people calling all the time with questions and we want them to have access to information that we have access to.”

The Oxford Historic Preservation Commission has recommended approval of the modified boundaries to the Oxford Board of Alderman. The city board will vote on the approval in a private meeting.