Board of Alderman conflicts with driver over ride share ordinance 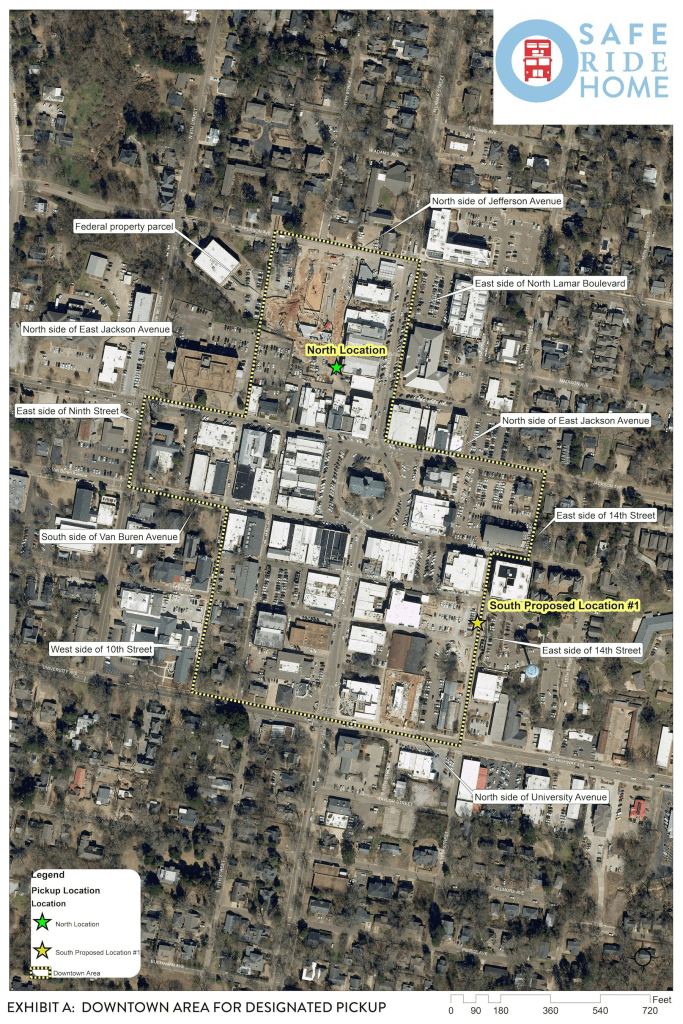 The city of Oxford is proposing two designated pick up locations for ride sharers to utilize in order to reduce potential risks and dangers. (Photo: The City of Oxford)

The Board of Alderman faced a discontented ride share driver during a regular board meeting regarding the city of Oxford’s plan for a ride share ordinance.

The board held it’s long-awaited third reading of a new ordinance that would create two designated pick-up and drop-off spots on the Downtown Square for ride-share vehicles, including Lyft and Uber, and taxis. A change was made to the ordinance requiring vehicle drivers to pick-up riders from pick-up locations from 9 p.m. to 3 a.m. daily.

The ordinance has proposed one pick-up to be located in front of the Oxford Parking Garage on North Lamar and the second to be located on South 14th Street next to Harrison’s. A third location is not in deliberation, but one can be authorized by the board at a later time.

Several members of the community have voiced concerns over the two proposed designated spots could lead to a potential loss in business due to how far away they would be posted from the center of the Square. Other drivers asked if the ordinance would be a potential risk to impaired customers who would have to walk further to reach a ride share vehicle.

One of the concerned drivers made another appearance at Tuesday evening’s meetings in hopes of changing the board’s decision.

Jeremiah Wells, a local ride share driver, spoke out against the ordinance once again. Wells is one of many displaced pandemic workers who have joined self-employment services like Uber and Lyft after the nation experienced a wave of job loss.

Wells said drivers were beginning to see the light at the end of the tunnel, but the city of Oxford threw them a curveball with the new ordinance.

“In a previous meeting I tried to convey the concerns for safety of riders and students of the university as well as the citizens of Oxford who use Uber and taxis, but apparently that fell on deaf ears,” he said. “Suddenly, here we are again with the same ordinance that did not receive enough support in the previous attempts for it to be passed, so the city tables this ordinance only for it to be brought up again when maybe people are not paying attention.”

Wells said he has not encountered one customer who was aware of the ordinance and questions the sudden wave of support from University of Mississippi students who were not present during the initial hearings earlier in the year.

In his speech before the board, Wells called on the alderman to remember the lives lost due to impaired drivers. The late Amie Ewing, who a portion of Highway 6 was dedicated to, and the late Officer Christopher Ewing were among a few names he referenced.

Mayor Robyn Tannehill said that claiming the board has forgotten any of the people who died as a result of drunk driving as they are trying to find a safer way for students to get home is offensive. The ordinance is intended to increase safety, not eliminate ride share service.

“We have spent so much time with Uber in developing this plan,” said Tannehill. “Uber has agreed with this plan, they have supported this plan and the app will work to support that. We all have all used Uber,  we all have used taxis and we all have experience in that realm. The Uber app will work appropriately if the board decides to do this.”

The university’s Vice Chair of External Affairs Bennett Matson later spoke in defense of the ordinance calling it a necessary move in guaranteeing safety for university students. Matson said he has worked on this issue for some time and personally reached out to Tannehill to move this initiative forward.

“I saw a huge opportunity,” said Matson. “Instead of allowing students to make bad decisions potentially or potentially wait 50 minutes and just decide to walk across the Oxford community to get there, to instead create a safer, more equitable and efficient place to do it.”

According to Matson, the system in place now leaves students, especially young and inebriated women vulnerable to potential risks.

“This is a proactive policy looking at something we can make a proactive difference against,” said Matson.