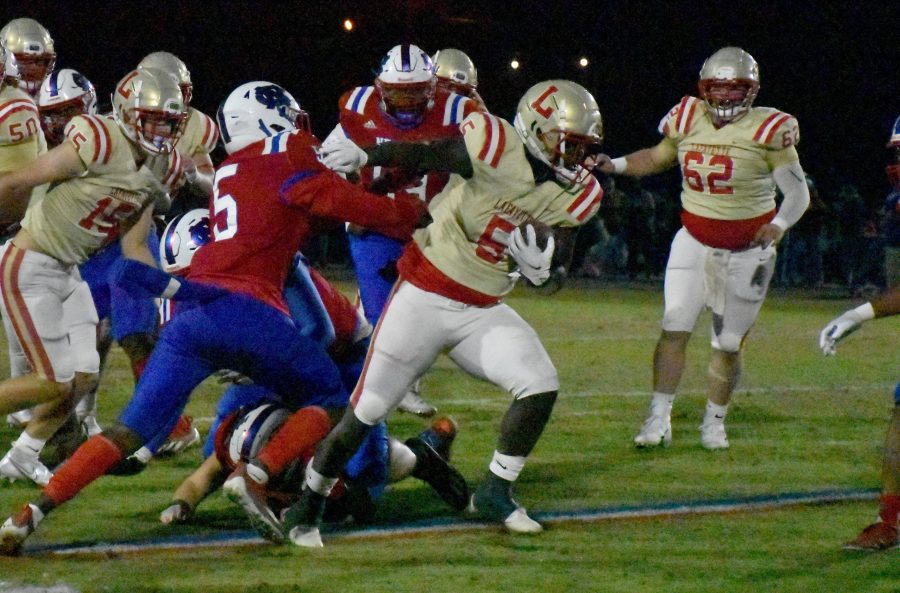 PHILADELPHIA — In what turned out to be a wild second round MHSAA Class 5A playoff game, it all came down to who had the ball last.

The Lafayette Commodores made things dramatic late, but Neshoba Central kicker Hunter Bevetta’s three field goals and game winner lifted the Rockets over Lafayette 23-20. The Commodores conclude their season at 10-3.

“Just came up short,” LHS head coach Michael Fair said. “The kids played well against a really good football team tonight. They never quit and battled back. We made plays to win it, but unfortunately couldn’t make the final play. I’m proud of our guys for not quitting. Good season.”

Lafayette defended well against a pass heavy attack from Neshoba Central throughout the night, but turned the ball over on downs three times at the end of the night despite having a chance late. The Rockets sold out to stop the run and were successful in early downs defensively.

“Our inability to get positive yards on first down really hurt us,” Fair said.

The Rockets scored right out of the gate as Eli Anderson connected with Dedrick McWilliams for a 20-yard touchdown pass. However, Trikyus Woodall responded just like that with a 78-yard return touchdown on the ensuing kickoff. The game was tied at seven apiece with 5:43 left in the opening quarter. Bevetta’s 43-yard second quarter field goal was the difference in a 10-7 halftime lead for Neshoba Central. Lafayette could not capitalize on a Kylan Egerson interception and fumble recovery late in the first half.

Throughout the third quarter, the Commodores could get little going as the Rockets sold out to stop the run. However, Lafayette’s defense kept them in the game regardless. Bevetta’s 39-yard field goal gave Neshoba Central a 13-7 lead going into the final quarter.

Midway through the fourth quarter, the Commodores executed a hook-and-ladder play to get inside Rocket territory, but later faced 4th-and-1 on their own 28. Jay Reed found a hole straight ahead and hit it for a touchdown from 28-yards out. However, a failed PAT attempt kept the game deadlocked at 13 with 5:36 left to play.

Neshoba Central would answer in the blink of an eye. Eli Anderson threw across the middle before the ball was tipped by a Lafayette defender and caught by Elijah Ruffin for a 53-yard touchdown. The Rockets then led 20-13 with 4:56 left. After going three-and-out, the Commodore defense gave their offense one final shot with 2:12 left.

The Commodores started on Neshoba Central’s 35-yard line after a return by Woodall and Lafayette tied it up immediately. Charlie Fair threw to Kylen Vaughn, who caught a tipped ball of his own for a 24-yard touchdown catch. Just like that, the game was tied at 20 with 1:07 left. The Rockets returned the ensuing kickoff past midfield and later set up Bevetta’s 37-yard game-winning field goal.

“We love these plays to death. They’re like our sons. They helped us be better men. Can’t say enough about this senior group and how they’ve contributed to our program,” Fair said.