Supermarket Sweep: The Pantry of Oxford receives over $1400 in groceries during Regents School campaign 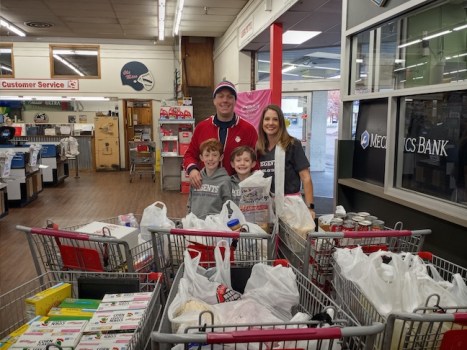 Len, Meg and their two sons William and Nathan participated in the Regents School of Oxford and Larson's CashSaver Supermarket Sweep fundraiser earning over $1400 in groceries. The groceries were donated to The Pantry while funds from the event will go to Regents' Capital Campaign. 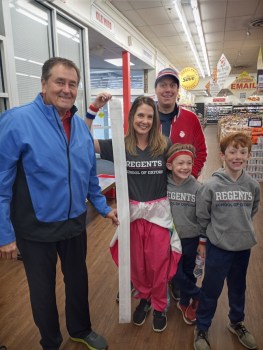 Larson's CashSaver co-owner Mark Larson stands with Meg and Len Reeves and their two sons Nathan and William after earning over $1400 in groceries.

The Reeves family entered Larson’s CashSaver early Saturday morning dressed in best athletic wear and with a game plan to sweep up as many goods as possible.

“We’ll have one pusher and one grabber,” said Meg Reeves in a 1980s inspired tracksuit outfit. She talked strategy with Regents School of Oxford board members as her husband Len Reeves was on standby and feeling the holiday spirit in a red tracksuit with a sequined Santa emblazoned on the front and back.

Len, Meg and their two sons, William and Nathan, were on a mission to fill as many baskets with food needed by The Pantry in Oxford, which supplies food stuffs to those in need around the Lafayette County-Oxford-University community.

The Reeves received a list of food from The Pantry that the organization needs to fill up their stores like diced tomatoes, spaghetti noodles and peanut butter. Meg and Len visited Larson’s the day before to search for all the items they needed.

“They said they only have two weeks worth of peanut butter left,” said Len. “We got a big list from them and of course we’re going to pick up some non-perishable items for ourselves, too.”

Regents School of Oxford partnered with Larson’s for a fundraiser where people could spend $20 per raffle ticket for a chance of winning an eight-minute shopping spree. The money raised this year will fund a new campus rebuilding initiative that focuses on their upper school from the 6th through the 12th grade as a part of the Capital Campaign.

“It’s adjacent to our current campus,” said Carla Cole, board chair of Regents School. “We’re in the midst of a capital campaign and hoping to build our building here in the next year. We’re excited that Regents has grown.”

“We’re glad to be involved in it,” said Mark Larson, co-owner of Larson’s Cashsaver. “We support all the local schools including Regents.”

When the eight-minute spree began, the Reeves in groups of two began a sprint down Larson’s aisles that turned into a mad dash for whatever items they could get toward the end. All too soon, the spree came to an end, but the family managed to fill six shopping carts full on cabinet necessities and non-perishable items.

The Reeves were amazed to see that they racked up over $1400 in groceries in eight minutes.

Meg said that eight minutes was not enough and they could’ve gotten more, but the experience was worthwhile.