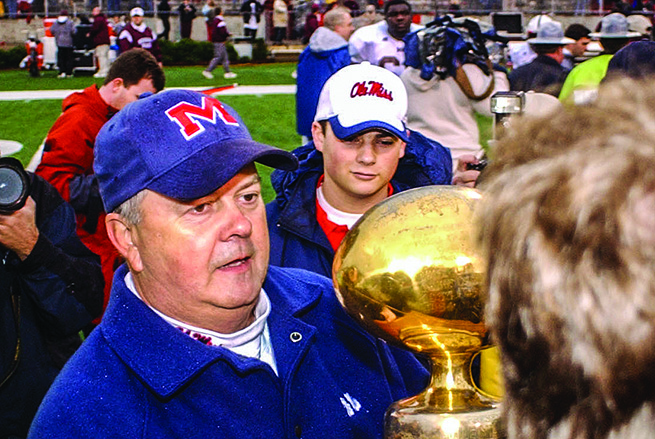 The school’s announcement came a day after the Blue Devils (3-9, 0-8) closed a three-win season with a 47-10 home loss to Miami. That marked the first winless slate for Duke in league play under Cutcliffe, who transformed the Blue Devils from one of the nation’s worst performers into a regular bowl contender and even claimed a division title in the ACC in 2013 before the program slid badly in the past two seasons.

In a statement, Cutcliffe, 67, said the decision came after “some detailed and amiable discussions” with new athletic director Nina King, who took over earlier this year but has worked at Duke since 2008 and handled primary administrative duties for the football program.

“I’m not sure just yet what the future will look like, but I am looking forward to some family time to reflect a bit on the past and see what the future holds,” Cutcliffe said.
Associate head coach Trooper Taylor will serve as interim coach while Duke searches for Cutcliffe’s permanent successor. Cutcliffe had one year left on his contract.

The Blue Devils were adrift when they turned in December 2007 to Cutcliffe, the former Mississippi coach and Tennessee offensive coordinator who tutored both Peyton and Eli Manning at the college level. The Blue Devils had just completed a 13-year run with four or fewer wins each season, including Ted Roof going 2-33 over the three seasons that preceded Cutcliffe. And the Blue Devils had gone 19-117 with just eight ACC wins over 12 seasons.

By Cutcliffe’s fifth year, Duke had reached its first bowl game since 1994. A year later, the Blue Devils completed a stunning climb to a 10-win season that included an AP Top 25 ranking, the ACC’s Coastal Division title and a berth in the league championship game.

That 2013 season started a three-year run that saw Duke go 27-13, including 15-9 in ACC play, and was part of a run of six bowl games in seven seasons — most recently an Independence Bowl victory over Temple in 2018 behind quarterback Daniel Jones, who later became the No. 6 overall pick in the NFL draft.

“We are extremely grateful for David’s leadership over the past 14 seasons,” King said in a statement. “He lifted our program to unprecedented heights, both on and off the field, while maintaining the core values of the university and we could not be more appreciative of his mentorship of every student-athlete who played for Duke during his tenure.”

The Blue Devils lost momentum after a 4-2 start to the 2019 season and failed to reach six wins for bowl eligibility. Things then came apart amid the COVID-19 pandemic, with Duke committing 39 turnovers — at least 14 more than any other Bowl Subdivision team — during a 2-9 season in 2020.

This year, Duke started 3-1, only to lose all eight ACC games. Seven of those came by at least 25 points, a rare example under Cutcliffe of the Blue Devils being consistently unable to play competitively. The Blue Devils have lost 23 of 29 games, including 21 of 23 in the league.

Still, Cutcliffe spoke about making sure the Blue Devils ran toward, not away, from their problems and shrugged off a question about his future earlier this month.

“I don’t think about job security,” Cutcliffe said. “How can I do that and do justice to the players that I’m coaching right now?”