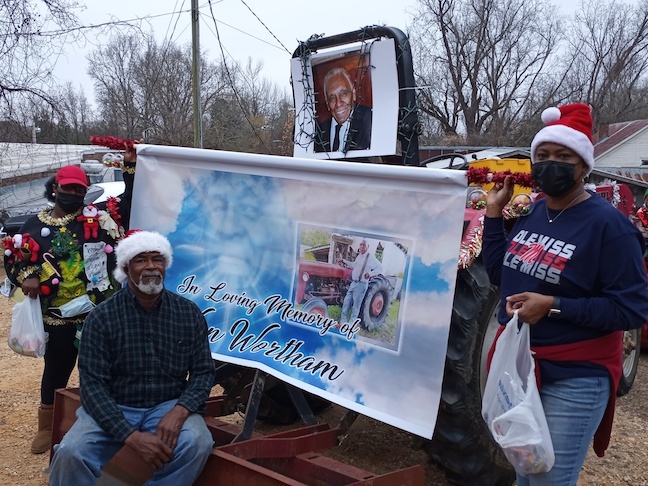 The community of Taylor gathered together to celebrate the beginning of the Christmas season with a Christmas Parade on Saturday afternoon.

Residents lined up by the Taylor Baptist Church in vehicles ranging from trucks to motor bikes, one person even rode a unicycle, led by a tractor belonging to the late Van Wortham in his honor.

“I love it,” said Rochester Brassell, Taylor local and close friend of Wortham. “This is probably about the best thing the Taylor community has ever done.”

Wortham was a local farmer and he assisted anyone in the local community as much as he could. According to Brassell, he organized the first Taylor Christmas parade 10 years ago, leading it on his tractor and Wortham continued to organize the parade until his passing in April of this year.

Brassell said Wortham treated everyone like family and did everything he could for them.

“He has done something for everybody in the Taylor community and ain’t nobody Black or White that he hadn’t done anything for,” said Brassell. “He’s like a daddy to some of them or like a brother to some of them. Like a brother, father or a son to somebody in Taylor.”

Wortham’s biological family was unable to attend but his daughter April Wortham-Nelson did send a message to be read aloud to the Taylor community. It read:

“Thank you dear residents of the city of Taylor for remembering our Dad, Van Wortham, and honoring the hard work and dedication he put forth each year to bring you holiday joy! He loved this community and so many of you. We have a feeling he is smiling down, watching as you celebrate today. Merry Christmas from the Wortham family!”

And celebrate they did. Once the parade began, honking and shouts of “Merry Christmas” could be heard in the air. Parade participants threw candy out to the crowd and waved as they walked and drove down the parade route where more residents awaited the procession.

“We’ll try to continue doing [the Christmas parade] each year in his name,” said Brassell. “If it wasn’t for him, we’d probably never have a Christmas parade in Taylor.”