‘Home is where the hog is’: Price Street Pig returned to its rightful owner 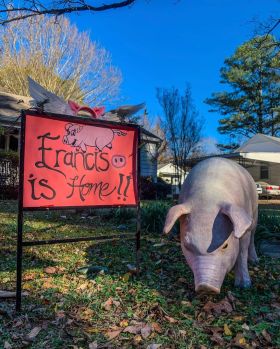 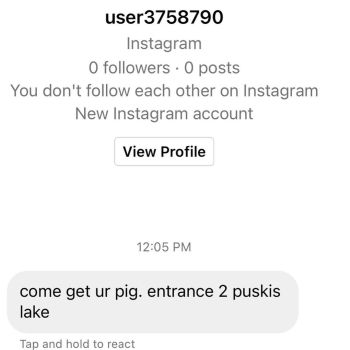 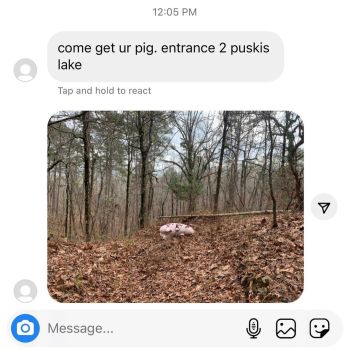 The Price Street Pig has made it’s way back home and just a couple weeks before Christmas. It may be a little ways off but the Oxford community can chalk this up as a holiday miracle.

The prop pig, also known as Francis Bacon, was taken from the porch of filmmaker Ryan Byers’ house on Saturday, Nov. 20 by two individuals — one in a red jacket and the other in a white top.

The theft of the beloved character may have shocked many others in the community but Byers said he was not surprised, only disappointed.

“We have a local that kind of warned us that it may be a circumstance when the pig started getting that popularity,” he said. “That and the proximity to the school expressed that he may get vandalized, taken or something. Being so close to the school and it being a college town, I think you always run the risk of something like this happening.”

In response to the theft, Byers placed a $500 reward for the return of Francis and local restaurant Big Bad Breakfast offered to put up more money for the reward. BBB also made a statement on an Instagram post urging for the return of the pig to Price Street or for it to be left on their porch.

Byers credits BBB for their efforts in the search for Francis calling them “a real pillar in the community.”

“That was a really incredible gesture,” said Byers.

According to the owner, Oxford gave tremendous support and constantly interacted with him during this period and it was example of how loved the pig was by everyone.

In the beginning Byers was hopeful, however as the days stretched into weeks, he became less and less optimistic about the return of Francis.

“It’s a small town so I think you have a small window,” said Byers. “One of the perks of living in Oxford is that so many people are so connected. If there was a missing pig in Los Angeles, you never would’ve seen such outpouring of support, but [Oxford is] such a concentrated community. We felt confident that someone would come forward with some kind of information, but when that didn’t happen we realized it would come down to luck.”

And as luck would have it, an anonymous person direct messaged the Price Street Pig instagram page on Saturday morning telling Byers to take his pig back with a photo of the prop laying in the woods. He speculates that the sender was the thief since the account was not linked to a person and they did not take the reward, but has no way to be sure.

The message said he would find it near the entrance to Puskus Lake, a little less than 15 miles away from the Price Street home. Byers made the trip that same morning to the lake and set the course back home to set things to right.

Although the incident might make anyone else more wary, Byers does not intend to do anything different about how they do things at Price Street going forward.

“I don’t think we would be doing the community any favors by changing the way we do things with Francis,” he said. “He was out there for the better part of the year with no incident, so we hope that this is a fluke and it doesn’t happen again or become a trend. We’re going to press forward and do what we’ve always done.”

However, he will be beefing up security with the help of local helping hands, so they will always know where the beloved pig is.

“We have had a couple people reach out and offer us advice and there was one gentleman who contacted us on Instagram who’s actually going to come by and put an air tag on Francis so we will have some sort of tracking device,” said Byers. “He’s coming out of pocket for it and donating it.”

And some forms of help are more ceremonial than others.

“As more of a theatrical gesture, the Crossroads Animal Hospital came by [Monday] and put a microchip on him and gave him a certificate,” said Byers with a laugh. “So we have a post and some photos that will go up about that relatively soon.”

In the future, Byers hopes Francis will stay put and that no one else will take the prop away from the community again and let everyone enjoy it as it is.

“This is something that brings a lot of people a lot joy on a daily basis,” he said. “Not just kids, but adults as well. It’s just a little off-putting that someone would deprive people of that happiness and it might be a little weird that it’s coming from a pig in a front yard, but it’s indicative of his rise to fame in less than a year.”

Byers jokingly said they may have to put bear traps in their yard if things get out of hand.

“It’s like ruining Christmas,” he said. “We just hope that people leave him alone.”

For more on the Price Street Pig, visit their Instagram page at www.instagram.com/pricestreetpig.