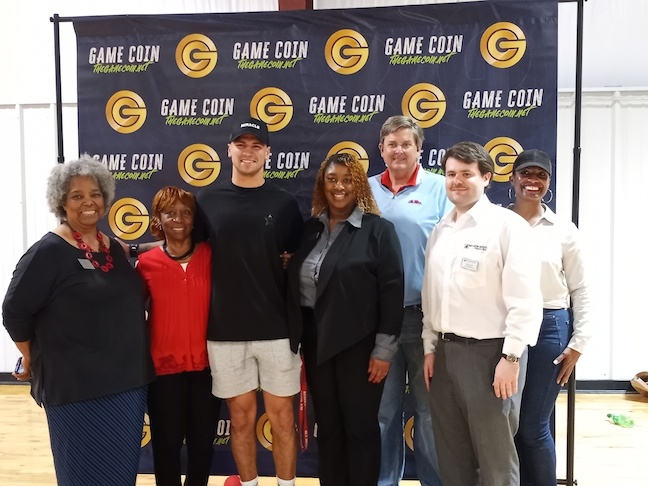 Ole Miss Quarterback Matt Corral pays it forward by partnering with Game Coin LLC to bring $25,000 worth of gifts to the kids of Oxford Boys & Club. Corral stands with BGC staff and board members in the BGC gymnasium on Friday, Dec. 17. (Photo: Maya Martin)

Christmas came a week early to the kids of the Oxford Boys & Girls Club. The local organization received a $25,000 donation in gifts through a partnership between Game Coin, LLC and Ole Miss Quarterback Matt Corral and distributed bags of goodies to 100 members on Friday.

Although he was not an official member of the BGC in his home state of California, Corral said he often interacted and played games with members. The experience and sense of community left enough of a huge impression that years later he decided to give back to the same organization in a different city.

He said he never had to present to children before but he wanted to leave them with impactful words of advice that would motivate them to be great.

“Whatever position you guys are in and regardless of circumstance, don’t let anyone ever tell you what you can and cannot do,” Corral shared with the crowd of children before the surprise event. “I know it sounds cliché, but it’s true. Family, close friends — it doesn’t matter. When you set your mind to it, you can do anything because I can guarantee when I was young, I didn’t think I’d be standing here.”

Later Corral told The Eagle that he was once in their position, listening to an older, experienced athlete giving out advice and wishing he could be like them one day.

“As a kid, everything just fascinates you and being in the position I’m in, I want to pay it forward,” he said. “I love doing it and I love being on this platform and being able to make someone’s day like this.”

And Corral’s plans to pay it forward were whole-heartedly welcomed by the LOU Barksdale Clubhouse.

BGC typically tries to plan something special for the holiday season. When a non-profit reached out to the clubhouse about a chance to do a special event with Game Coin LLC and Corral, the staff jumped at the chance to bring a little holiday magic to their kids.

Director Kenorus Wilson said the community is full of “angels” who have continually supported their organization through the years and invested in the lives of the people.

“We’re always striving to make a difference in the lives of not only the youth of Oxford, but the entire community,” said Wilson. “It’s just a blessing in disguise and we’re thankful for the opportunity that our kids get to take part in it.”

The giving back doesn’t stop with the BGC. Staff and board members were motivated to give back through the incredible gift they were given by showing support to local businesses and shopping local.

“We literally made the year of some of these stores,” said Frank Dyer, member of the BGC Board of Directors. “A lot of them make their year in the last 30 days of the year and so this has been a trickle down blessing.”

Staff members quickly prepared a big surprise and personally bought gifts for each of their children and bagged them to look like Santa’s sack of toys. BGC Marketing Director Evie Storey personally bought carts and carts full of gifts like Barbie dolls, UNO cards, toy trucks and mini drones for the members.

Storey said she got questions about the numerous bags and multiple carts of toys, but it also brought on great interactions

Parents of BGC members helped as well by gift wrapping and distributing while keeping the big secret from their kids and the BGC board of directors gave support as well, according to Storey.

“It was lots of fun and it was fun to invest in the local community,” she said. “It brings the whole community together.”

It’d be an understatement to say the children were happy to find bags full of multiple gifts of all kinds to take home right before their winter break even began. The BGC gymnasium was soon filled with chatter, screaming and the sounds of playing that was infectious for everybody in the room.

“Just to see everybody’s smiles when this whole thing went down and feel the energy that I had never felt before was different,” said Corral. “It was different for me and I plan on doing it again.”

“This is what Boys & Girls Club is all about because anytime it’s about investing in our kids and seeing the joy on their faces,” said Storey. “This is what keeps us motivated as staff every day and we can’t thank Matt and the Game Coin company enough for thinking about the Oxford Boys & Girls Club. We’re overjoyed.”