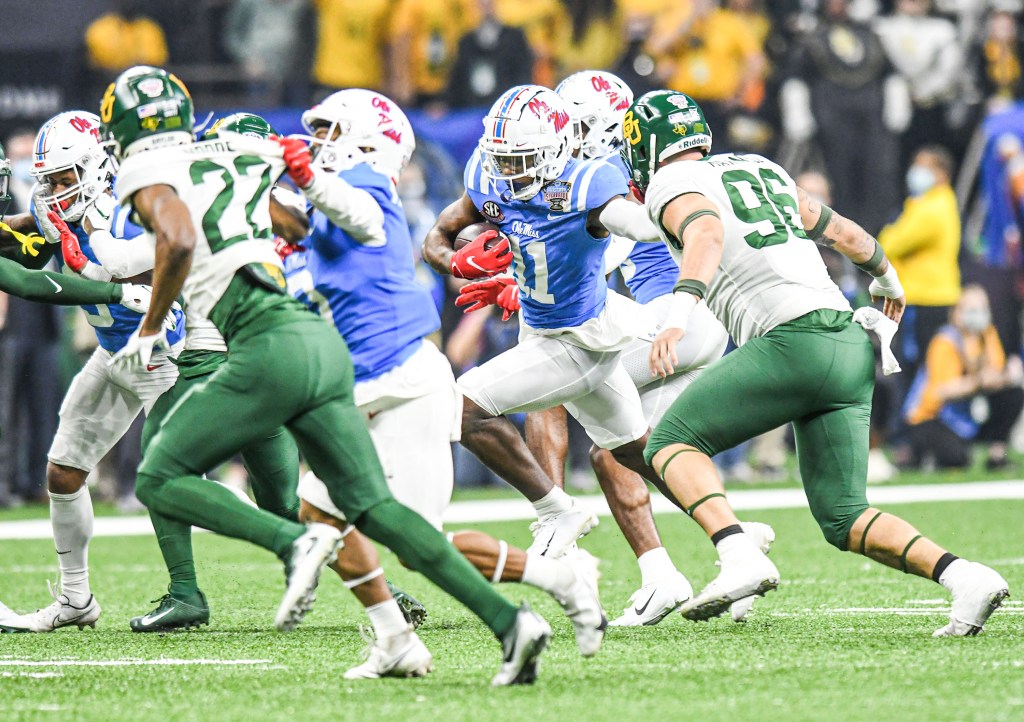 Ole Miss running back Jerrion Ealy played his last game in an Ole Miss uniform on Saturday, announcing his intentions to declare for the NFL Draft.

Ealy, a Mississippi native, broke the news following the Rebels 21-7 loss to Baylor in the Sugar Bowl.

“After much prayer and thoughtful conversation with my family, I have decided to forego my senior year of eligibility and declare for the 2022 NFL Draft,” Ealy said in an Instagram post. “I appreciate all of your continued support, and I can’t wait to make you proud at the next level.”

The junior running back led the Rebels in rushing in each of the past two seasons, amassing 768 yards 133 attempts this year. He joins Deuce McAllister as the only running backs in school history to rush for 700 or more yards in three straight seasons.

Ealy closes the book on one of the most storied careers in school history, finishing sixth all-time in rushing yards, sixth in rushing touchdowns and fifth in yards from scrimmage. His 5.8 yards per carry ranks fourth-best among players with at least 200 rushes.

A five-star recruit coming out of high school, Ealy was also a highly-touted baseball prospect. He was selected by the Arizona Diamondbacks in the 31st round of the 2019 MLB Draft but elected to play for Ole Miss instead, suiting up for Mike Bianco’s squad as a freshman before sitting out the following year due to an injury sustained near the end of the 2020 football season.

The dynamic running back is expected to go in the middle rounds of the upcoming NFL Draft following his best season in a Rebel uniform.

Ole Miss will also be without the services of wide receiver Dontario Drummond, who declared for the draft Sunday on social media.

“It’s been so amazing to play in front of the best fans in college football,” Drummond wrote. “I look forward to the next chapter as I begin preparation for the 2022 NFL Draft. Hotty Toddy.”

The announcement was merely a formality for the fifth-year senior from Laurel, MS, who led the Rebels with 76 receptions for 1,028 yards and eight touchdowns this season, including nine catches for 104 yards in the Sugar Bowl.

The Rebels will look very different on offense following the departure of Ealy, Drummond and Matt Corral, who declared for the draft following the Egg Bowl in November.