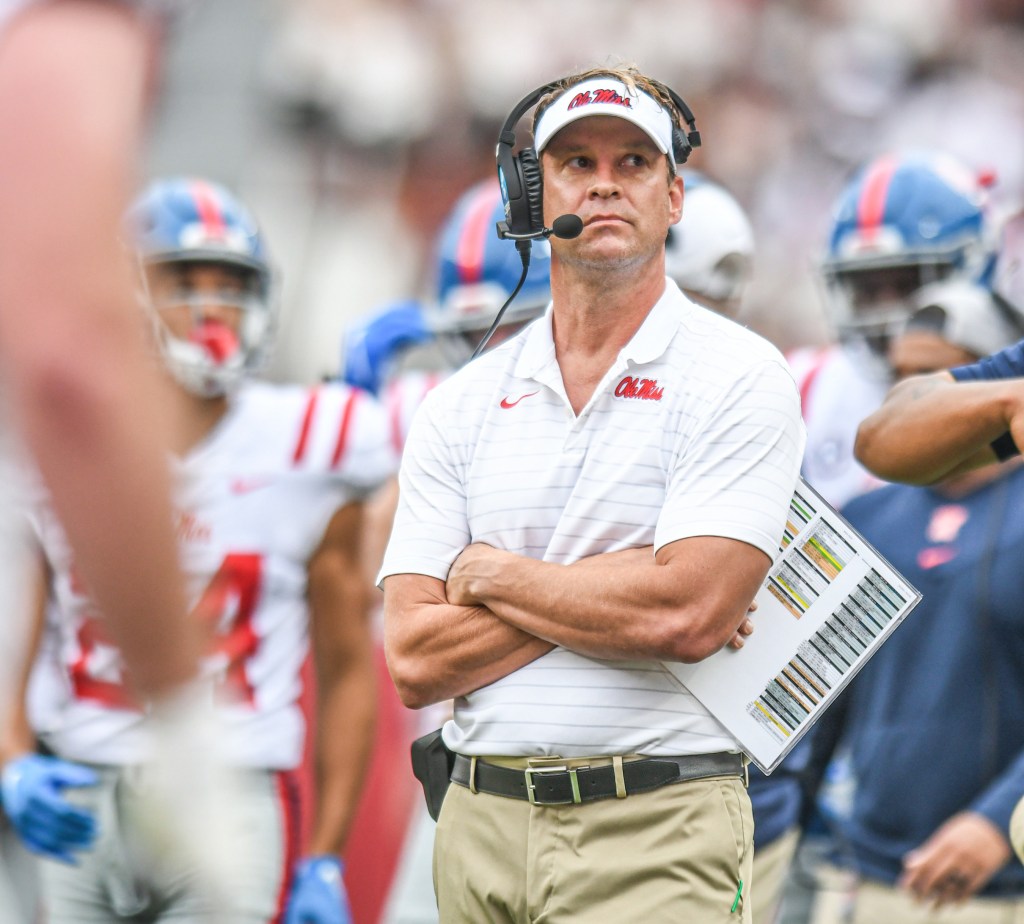 Head coach Lane Kiffin looks at the video board after Ole Miss failed to get a first down on a 4th down play Alabama at Bryant-Denny Stadium in Tuscaloosa, Ala., Saturday, Oct. 2, 2021. (©Bruce Newman)

The Ole Miss coaching staff will look very different next season following a record-breaking 10-3 campaign ending with a 21-7 loss to Baylor in the Sugar Bowl.

Following the game on Saturday head coach Lane Kiffin confirmed reports from earlier in the week that strength and conditioning coach Wilson Love will be leaving to accept the same position at Oregon.

“Wilson is going to Oregon. We’re happy for him,” Kiffin said.

Kiffin gave Love his first opportunity as a head strength and conditioning coach at FAU after spending three seasons together on Alabama’s staff. He was one of the first new hires for Kiffin in Oxford, joining the staff in December 2019.

Matt Zenitz of On3 Sports reports that the Rebels are close to hiring former Florida strength coach Nick Savage to replace Love.

Savage, who spent four years under Dan Mullen at Mississippi State before following him to Florida, was one of several coaches not retained by new head coach Bill Napier.

With eight years of SEC experience under his belt, Savage was a natural replacement for Love, who departs after two successful seasons with Ole Miss.

“When you win like we did, and have an historic regular season, people come and want a piece of what you are doing. So that’s happened,” Kiffin said.

Ole Miss co-defensive coordinator DJ Durkin is also receiving attention from other programs, with reports that Jimbo Fisher is interested in adding the former Maryland head coach to his staff at Texas A&M to replace Mike Elko.

“DJ has probably got a lot of opportunities. He’s done a great job all season,” Kiffin said. “I don’t know of any other opportunities or anything, but he’s done a fabulous job with our players, not just performance, but recruiting and flipping over a roster that … statistically over the last five years of defense here, [was] as bad as anybody in the country.”

Brad Logan of 247Sports reported Sunday that Ole Miss is negotiating a new deal that would keep Durkin in Oxford, but no official announcement has been made yet.

Weis served as offensive coordinator and quarterbacks coach under Kiffin at FAU for two successful seasons before a disappointing stint at USF.

The Rebels will entrust Weis to lead a new-look offense that must replace at least five key starters.