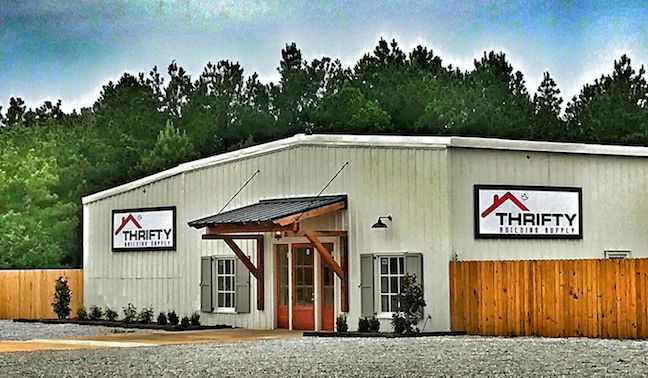 Mark Evans, President and CEO of Thrifty Building Supply, a  major supplier to home builders in west Tennessee and north Mississippi, retired at the end of  2021, after 31 years of helping grow the business his father started 37 years ago. Richard Cooper,  Vice President and partner, has taken over the ownership of the company on January 1, 2022.

Thrifty Building Supply was started in 1984 in Collierville, Tennessee, by Mark’s father, Farrell Evans, who had prior experience working for a building products distributor. At that time, Collierville was a  rural farm area, and Farrell sold discount, shop-grade materials for sheds and similar structures.  Now, nearly four decades later, the business has grown exponentially, providing quality building materials to some of the largest homebuilders in the area. It also holds the designation of being  one of the longest-running family-owned business still in operation in Collierville.

During the early years of the business, Mark worked part-time alongside his father and eventually  joined the company full-time in 1990. Throughout the years, he served in a variety of roles, ranging  from delivery and sales to warehouse services and operations. Mark began overseeing the  management of the company when Farrell retired in 2004 and has continued to lead the  organization since that time.

“My leadership philosophy is that the business exists not only to be financially profitable, but to  provide employees with a quality work culture that helps our clients succeed,” said Mark. “My focus  has always been to honor God in how the business is run and to maintain the same level of  commitment to community and service that my father instilled when starting the company 37 years  ago.”

According to Mark, the company’s core values of faith, integrity, dependability, service, and family  were influenced by Farrell, who passed away on April 27, 2018, after a battle with cancer. “I was  blessed to work alongside my father for so many years to help develop the business,” he said.  “Even after my father retired, he was always interested in how the business was doing, in new  industry trends, and in our support of the local community.”

In 2015, Mark brought on Richard Cooper, a lifelong Memphian with more than 20 years of building  industry experience, as a managing partner. That same year, Thrifty Building Supply opened its Door Shop in Olive Branch, MS, fulfilling Mark and Farrell’s long-time dream of extending the  company’s offerings to include custom doors. Since that time, Richard has managed the Door Shop, in addition to overseeing sales and working closely with Mark on business development.

Under Mark and Richard’s combined leadership, the business has thrived throughout the last six  years. Thrifty Building Supply now has almost 100 employees and serves builders throughout west Tennessee and north Mississippi from its three locations in Collierville, TN, Olive Branch, MS, and  Oxford, MS.

According to Mark, Richard has been an integral asset to the organization and is well-positioned to  take over its leadership.

“I know I’m leaving the business in good hands with Richard,” said Mark. “We share the same values and beliefs, as well as the philosophy that when you provide excellent  service, the sales will follow.”

Recently at the company’s annual Christmas party, Farrell Evans’ wife, Barbie Evans, took the  opportunity to thank employees for their dedication and commitment to client service.

“It’s just a  blessing to look around and see all of you who are working for our business. We thank you for all  the hard work and the way you treat our customers,” said Barbie. “It’s hard to believe that a little  bitty business with one employee has grown this large. We know God’s hand was in it. God has  blessed us.”

The company hosted a retirement party and open house on Wednesday, December 29th and  Thursday, December 30th for customers and friends to stop by and celebrate with Mark and his  family.