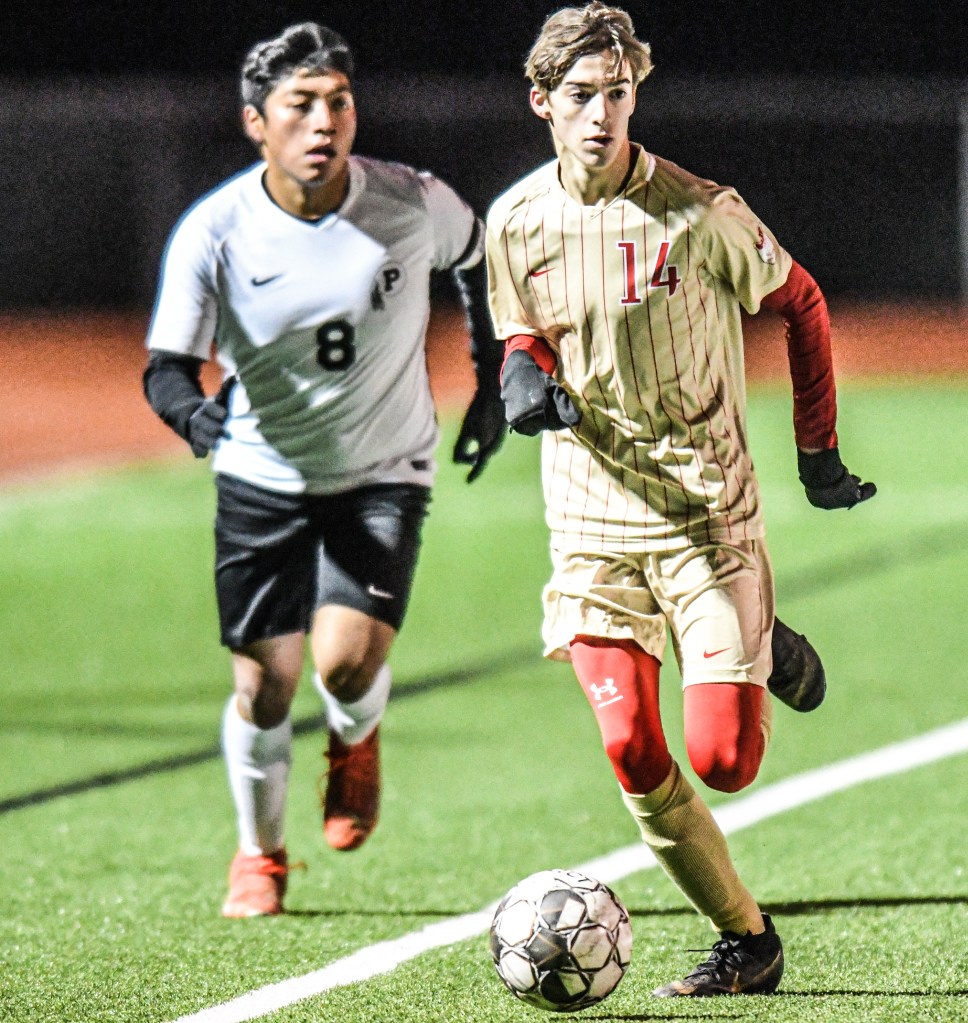 Lafayette’s boys soccer team was eliminated from playoff contention at home Thursday night when they lost to Saltillo 3-1.

The Commodores (7-12, 1-3 Region 1) were unable to capitalize on their chances in a physical contest that was hotly contested until the very end.

“That’s kind of been our whole season,” head coach Gene Anderson said. “We do really well possessing the ball, we get some good things moving forward, we get a lot of looks and opportunities. But the guys that are up top, we’ve got a sophomore and two freshman and they just haven’t figured out how to be killers yet.”

Lafayette was playing without two key starters on their back line. Senior Ben Wells and junior Isaac Reyes were not in the lineup, and their absence was significant to a young team that struggled to defend Saltillo’s relentless attack all night.

“Both of those are solid guys who play pretty much every game, every minute,” Anderson said.

Anderson added that their absence forced star junior Crosse Lindsay to move from the midfield to center-back, which limited their creative ability in the middle of the pitch.

“He usually plays like a center-midfielder or a holding mid for us, but we had to move him to the back tonight and that hurt,” he said. “He’s kind of our playmaker, he gets things going.”

Saltillo was knocking on the door throughout the first half, and finally broke through midway through the period with a series of incisive passes that sliced up the Commodores’ defense and ended with the ball in the back of the net.

Forward Wesley Kilpatrick carried much of the creation load in the first half, and nearly created an opportunity out of nothing in the final moments before the break. With less than five minutes remaining he dribbled into a crowd of defenders, splitting two of them and and firing a shot off his left foot that was knocked down by the Saltillo goalkeeper.

The Commodores entered halftime with exasperated looks on their face, unable to break through against a Tigers’ defense that smothered their every chance.

They managed to pull one back early in the second half when William Tidwell was taken out from behind in the penalty box, prompting the referee to point to the spot. Lindsay lined up over the ball and confidently put the penalty away to even the score at 1-1.

Lafayette looked energized after the goal, dominating possession and firing shot after shot on goal. None managed to find the back of the net however, as the Commodores were unable to capitalize on prime chances in front of goal.

“We seemed to control the possession at the beginning of both halves. We got it into the box a lot, we just didn’t finish,” Anderson said.

As time ticked away in the second half, both teams appeared worn down from the physicality of the contest, launching errant passes and committing sloppy turnovers with their hands on their hips.

With 5:28 on the clock the Commodores ceded possession deep in their own half, leading to an absolute rocket off the foot of a Saltillo attacker that curled into the top-right corner.

Lafayette looked dejected after conceding, as several players hung their heads while others looked up at the scoreboard in dismay.

The Tigers took advantage of their lack of focus, scoring another goal just moments later that put the game on ice.

The final goal was the dagger in the heart for the Commodores, who could have snuck into the playoffs if they managed to keep the score within one.

“Giving up those two at the end… we’ve been struggling with defense all year,” Anderson said. “We’re a really young team, and that’s part of it. Then, tonight, we had the two starters out on defense so we were playing a little bit more youth.”

Anderson said the loss was heartbreaking, but will add motivation for a young team hungry to prove themselves.

“[It was] just kind of a learning experience,” Anderson said. “We’ll learn from this… it’s fuel for the fire for next year.”

The Commodores close out their season with a pair of non-region games at home against Mooreville on Jan. 18 and against DeSoto Central on Jan. 20.