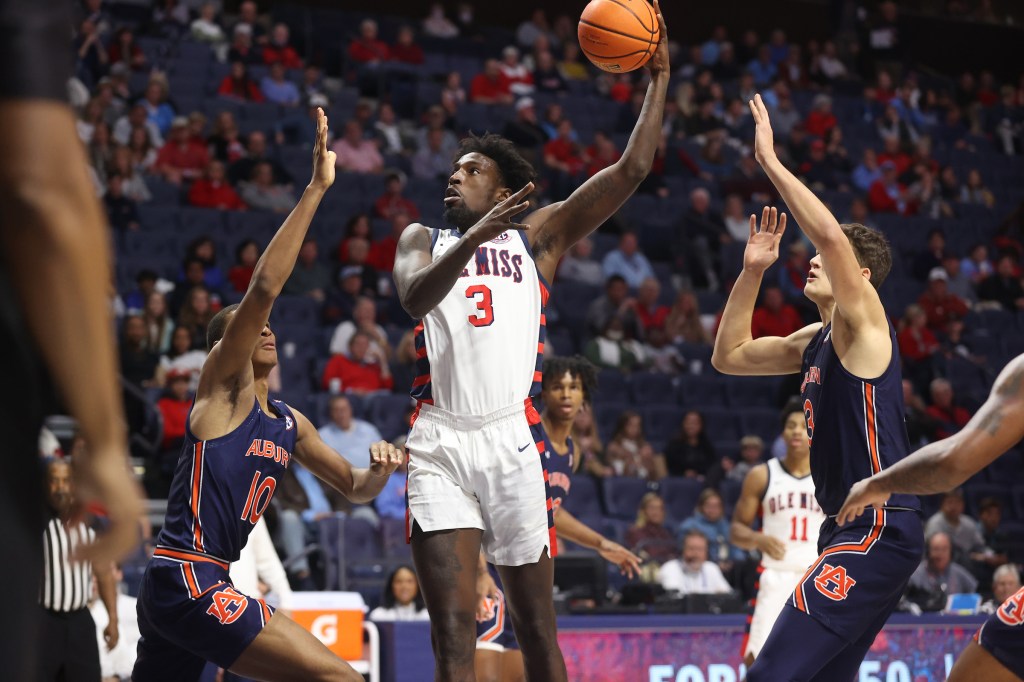 Ole Miss center Nysier Brooks (3) shoots a jump hook over Auburn's Jabari Smith (10) in the first half of the Rebels loss to the Tigers in the Sandy and John Black Pavilion on Saturday, Jan. 15. (Josh McCoy/Ole Miss Athletics)

OXFORD, MISS — Ole Miss men’s basketball fell at home to No. 4 Auburn Saturday night despite leading by double-digits for long stretches of the game.

The Rebels looked like a completely different team from one half to the next, going ice cold from the field down the stretch after torching the nets in the first half.

“We came out playing well, collective as a unit, then down the stretch we just made some costly mistakes as a team,” said senior guard Tye Fagan.

They shot over 56% from the field in the first half before registering just seven made buckets in the second frame, struggling to get open looks against a Tigers squad that is playing some of the best basketball in the country right now.

Ole Miss caught fire after a back-and-forth start, outscoring the Tigers 25-10 over a nine-minute stretch to take a 14-point lead.

Fagan helped sparked the run, coming off the bench and knocking down two threes in quick succession.

Center Nysier Brooks was also a major factor in the first half, getting the better of Auburn star Walker Kessler on both ends of the floor. The graduate transfer from Miami imposed his will in the paint, getting solid positioning on the low block and sealing off defenders with his massive frame.

The Rebels led 44-31 with 1:20 remaining in the half before Auburn closed on a 7-0 run to cut the lead to just six entering the break.

“How we ended the first half, the last minute and twenty seconds, you know ball screen coverage was weak and then two straight turnovers kind of flipped the game,” Davis said.

Auburn caught fire from beyond the arc in the second half, knocking down shot after shot from three-point range. Sophomore guard Wendell Green Jr. gave the Tigers the lead with a pull-up three in transition, the second of three straight triples that gave them a 58-53 advantage.

Ole Miss responded with a 5-0 burst to even the score, but Bruce Pearl’s squad answered in kind, rattling off nine straight of their own prompting a frustrated Davis to burn his second timeout of the half.

The Tigers locked down defensively from that point, surrendering just two points over the next four-plus minutes of action. Kessler was a menace in the painted area, recording five blocks and three steals in the second half while impacting nearly every shot at the rim.

“Their rim protection in the second half, I thought we got the ball in some really good places but their length really bothered us, you know Kessler did a really good job,” said Davis.

The Rebels were unable to overcome Auburn’s ferocious defense, frustrated by the lack of opportunities at the rim.

Davis said the loss was a tough one to swallow, especially with the way his team performed in the first half.

“We had some pockets of really good play but its a disappointing loss for our team, the guys are really hurt in that locker room,” he said. “It was good toughness on our part, we just didn’t have enough at the end.

Ole Miss struggled to create good scoring looks down the stretch after junior guard Austin Crowley went down late in the first half, forcing Fagan and sophomore Matt Murrell to shoulder much of the creation load.

“Austin Crowley went down with an ankle injury and we really got thin,” Davis said. “Daeshun needed a break… we were playing Matt and Tye at the point, but give Auburn credit… they played really well.”

Davis’s squad is now razor-thin at the guard spot following the injury to Crowley having already lost leader scorer Jarkel Joiner. The Oxford native underwent a procedure on Thursday to address a back injury that has plagued him since the beginning of the new year.

They must now rely on some younger players to step up as they try to battle their way back into contention in the SEC.

“We just got to go back and get our team to play the best of our ability with the guys we have,” said Davis.

The Rebels will look to get back on track when they face Missouri at home on Tuesday.