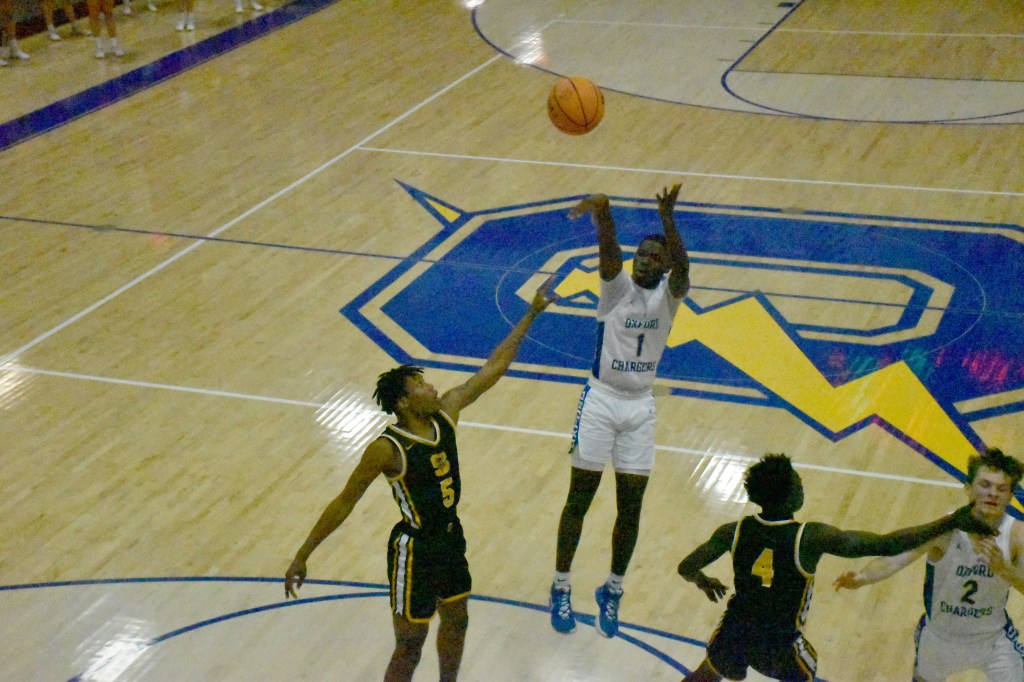 The Chargers failed to get into a rhythm offensively all night, struggling with the Yellow Jackets’ length and quickness on the perimeter.

“I thought Starkville did a good job playing help defense, and then when we would get by them the length really bothered us,” said head coach Drew Tyler. “They altered shots, blocked shots, and there were probably some shots we didn’t take because of their length.”

Starkville opened the game on a 13-0 run, forcing turnovers and getting out on the break to score easy buckets in transition. The Yellow Jackets played high-pressure defense, picking up the Chargers full court and playing high in the passing lanes.

Oxford was unable to get anything going against their swarming defense, struggling to get open looks all night.

“We were running sort of a four-corner offense, not to stall it, but to test Starkville’s footwork and to get into the lane and kick out to open shooters. But we couldn’t get into the lane, we just couldn’t do it,” Tyler said.

Despite spacing the floor as much as possible, the Chargers still failed to get the defense off-balance, moving the ball aimlessly around the perimeter.

“It was really like red rover,” said Tyler. “We were just passing the ball back and forth, achieving nothing… and you can’t do that when you’re playing from behind.”

Oxford kept the score within reason through halftime by playing solid help defense, but their lack of offensive firepower finally caught up to them in the second half.

“After we played so well at Tupelo on Tuesday, and we used a lot of our firepower on Tuesday, we were laying eggs on the offensive end,” Tyler said. “Coach Reed and I were pretty impressed with our defense through two and a half quarters… but our offense just could not produce those points.”

Starkville caught fire from deep late in the third quarter, scoring 15 of their 17 points from beyond the arc in the quarter.

“I thought Starkville was really disciplined and shared the ball,” Tyler said. “They allowed their teammates to shine, meaning when they drove they got into the lane, gave us problems because we would collapse and then they’d find an open shooter and they’d knock down shots.”

Their shooting forced Oxford to close out hard to the perimeter, opening up wide open driving lanes to the basket.

“We have to play a clean game against teams like Starkville, and I just told them in postgame that we have to have the best version of everybody for us to have a chance to win,” said Tyler.

The young Chargers were frustrated by a Starkville team that was bigger, stronger and faster at every position. Their lack of experience shone through in the fourth, as the Yellow Jackets took advantage of their frustration and blew the game wide open.

The 64-39 defeat was their worst loss against a Mississippi school since December 2019, when they fell to Center Hill 93-64.

“We’re gonna keep grinding away… I told them they can replay the game, I’m sure some of them will replay the game in their mind, but we can’t let that game affect our next game,” Tyler said.

The Chargers (13-8, 1-2 Region 1) move on to play at Lafayette in the Cross-Town Rivalry on Jan. 18 before resuming region play against Tupelo at home on Jan. 25.