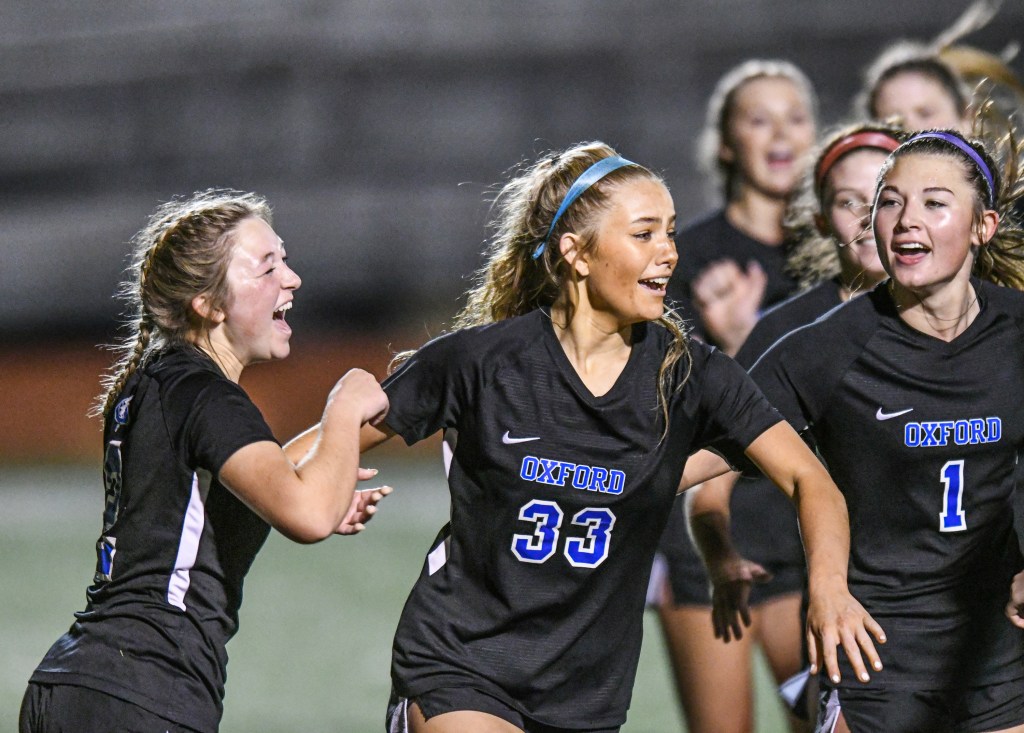 OXFORD, MISS — The Oxford girls soccer team won a hotly contested match at home Friday night against rival Starkville, clinching a spot in the playoffs for the ninth consecutive season.

The Chargers controlled possession throughout the game thanks to a superb defensive performance from the back line. They kept the Starkville attack in check all night, turning them away at every opportunity.

The Yellow Jackets adopted a bend-but-don’t-break defensive strategy after giving up three goals in their first contest of the season against Oxford back on Dec. 2 in Starkville. They were content to concede possession, allowing the Chargers to control the midfield while packing the box with extra defenders.

The strategy paid off initially, as Oxford was unable to break through until the very end despite playing most of the game deep in the Yellow Jackets’ half.

“Starkville was playing pretty defensive against us. We scored quite a few on them last time, but this time they were trying to take it the distance there and they did a really good job of packing it in all night. It kept us frustrated all night for sure,” said head coach Hunter Crane.

Goalkeeper Kaitlyn Urbanek did not see much action in the game, as Oxford’s defense locked down the Yellow Jackets’ attack all night.

“The defense just kind of stifled them,” Crane said. “I think our goalie touched the ball two or three times, but it was just straight two her and pretty relaxed for the most part so I was really happy to see that.”

Urbanek’s toughest challenged came midway through the first half when a perfect cross into the box found the head of a Starkville attacker, who redirected it towards the top-right corner. The sophomore goalkeeper reacted with cat-like reflexes, turning the shot away at the last moment with a diving save off her outstretched gloves.

Winger Maddie Gray created most of the chances offensively for Oxford in the first half, finding her way into the box nearly every time she touched the ball.

The Chargers nearly broke through early in the half when Gray darted down the right wing, slicing past her defender and firing a shot towards the back post that missed by mere inches.

The sophomore followed it up moments later with a superb cross into the box that was headed just wide of goal by senior striker Ainsley Tacke.

Her final chance of the first half came in the closing moments of the period, when she powered her way through a swarm of Yellow Jacket defenders and launched a rocket towards the bottom-right corner that deflected off the fingertips of Starkville’s goalkeeper.

The two sides entered halftime locked in a scoreless draw, with neither team able to solve the opponents defense.

Oxford appeared to take the lead early in the second half on a header from Tacke coming off a beautiful cross from junior Allison Greer, but the assistant referee raised his flag at the last moment, indicating that the ball crossed the end line before Greer was able to redirect it into the box.

The call prompted groans from the home supporters, who were desperate for a goal following 50-plus scoreless minutes.

Pressure continued to mount as time ticked away in the game, and the energy from the Charger faithful built with each passing minute.

With overtime looming, Oxford was awarded a corner kick with mere seconds on the clock, prompting the home crowd to rise to their feet in anticipation.

Greer lined up over the ball, nodding to her teammates in the box before launching a curling cross towards the back post. The pass found the head of junior Parker Martin, who buried the ball in the back of the net as the home sideline erupted in cheers.

As the referee blew the final whistle the Chargers’ bench stormed onto the pitch, gleefully celebrating their last-second victory.

Crane said he was confident in his team’s ability to pull out the win despite their offensive struggles on the night, pointing to their ability to convert set pieces in critical moments.

“We’ve got some height and some really athletic girls that like to jump, so anytime we get a corner we feel like we’re gonna have an opportunity to score,” Crane said. “With a couple seconds left there we felt really good about that one, obviously got a good kick off, and put it in the net.”

Oxford (10-5-1, 4-1 district) secured their ninth consecutive playoff appearance with the win, while Starkville was eliminated from contention after falling to 2-3 in district play.

The Chargers will play their final regular season contest at home against Tupelo on Jan. 20 in a battle for the top spot in the region.