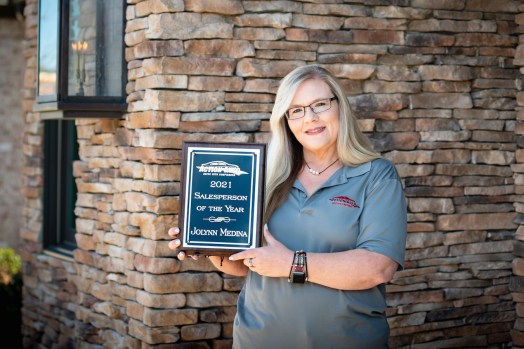 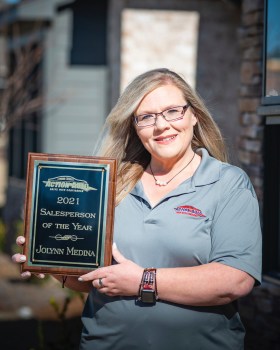 Longtime Oxford resident Jolynn Medina was recently named Action Auto’s 2021 Salesperson of the Year after selling a record number of vehicles for the Oxford-based car dealership.

Medina, who serves as the Oxford dealership’s lot manager, sold a total of 161 vehicles last year. She said her favorite part of the job is seeing happy customers walk away with a new car.

“I love to make people excited and happy when they get approved,” Medina said. “I love to see people grinning from ear to ear from the satisfaction of getting the car they wanted. I try to treat people the way I want to be treated.”

Action Auto is a buy here, pay here car dealership that sells quality vehicles to individuals regardless of their financial situation or background.

A subsidiary of local investment firm EquiPro Holdings, the fast-growing company is headquartered in Oxford and operates five locations throughout Mississippi and Alabama, with plans to open two to three lots annually.

Crystal Elliott, Action Auto’s operations director, said that she has been consistently impressed by Medina’s growth since she started at Action Auto in 2019. She is not only a more effective salesperson but stands out as a leader at the Oxford lot.

“Everything Jolynn would ever ask anyone else to do is something that she would do,” Elliott said. “She is leading by example and showing her people the way of the company in a way that’s supportive and encouraging.”

Even on the day Medina received her award, she was going above and beyond expectations. Since the Oxford lot was down a few people due to Covid, she “brought some stuff to put my hair up” and was filling in to help clean off some cars and get them ready to sell.

“I love everyone that works on the lot with me,” she said. “We’re the perfect team. We work together really well and try not to outsell each other.”

Outside of work, Medina is an avid outdoorswoman who loves driving four-wheelers, going on trail rides, fishing, camping and boating. She also enjoys spending time with her three children, six grandchildren and two dogs, Hemingway and Piper.

Medina said that Action Auto’s referral program, which offers $100 cash to anyone who refers someone to the dealership who then gets approved, was a key factor in her success in 2021. Over 25% of Medina’s sales came from referrals.

“People love getting that $100 check,” Medina said. “Each person, I give them a business card and four referral cards and say, ‘Here’s potential for a lot of money.’”

Action Auto also stands out because of its 12-month/12,000-mile vehicle protection/warranty plan that is included with purchase of vehicle. In Medina’s words, the warranty gives her customers “peace of mind when they leave” and helps them feel comfortable with their purchase.

Just before 2021 ended, Medina also had the honor of selling Action Auto’s 1,000th car of 2021. While this was one of her most rewarding sales, she said selling a young person a car is always rewarding.

“I’ve probably sold five or six young people their very first vehicle they’ve ever purchased,” Medina said. “It’s amazing to see how happy and satisfying it is to get their first purchase.”

In addition to Medina’s success and the sale of over 1,000 vehicles, Action Auto closed its year with several milestones, including the addition of dealerships in Alabama.

“After the year that Action Auto had, it’s hard not to be excited,” said Elliott. “When we break records, it ignites passion and makes us extra focused and ready to tackle new things in 2022.”

She credits those achievements and her hopeful attitude to her growing team of dedicated salespeople. In 2021, Elliott worked with the sales team to create an exciting customer experience across all Action Auto locations.

“The people who work here have a lot of passion for what they do,” Elliott said. “When they have a desire to do a job well and know-how and why to do it, they’re unstoppable. Anyone visiting our dealerships will automatically recognize that our employees believe in what they’re doing.”

Medina said she appreciates Elliott’s leadership and the culture that she has created within the company.

“Action Auto is a wonderful company, and I’m so proud to work here,” Medina said. “I love the way I’ve been treated, the things I’ve done and the appreciation I get. It’s a great atmosphere, especially when Crystal comes in and gives us her sweet side when we really need it. I’ve been appreciated more than at any other job.”

As Action Auto expands into new locations throughout Mississippi and Alabama, they are always seeking talented, motivated individuals to join their sales team.

“I’m looking for someone who can keep a positive attitude through just about anything and who wants to learn,” Elliott said. “I bring on people without experience because it makes it that much sweeter when they do succeed.”