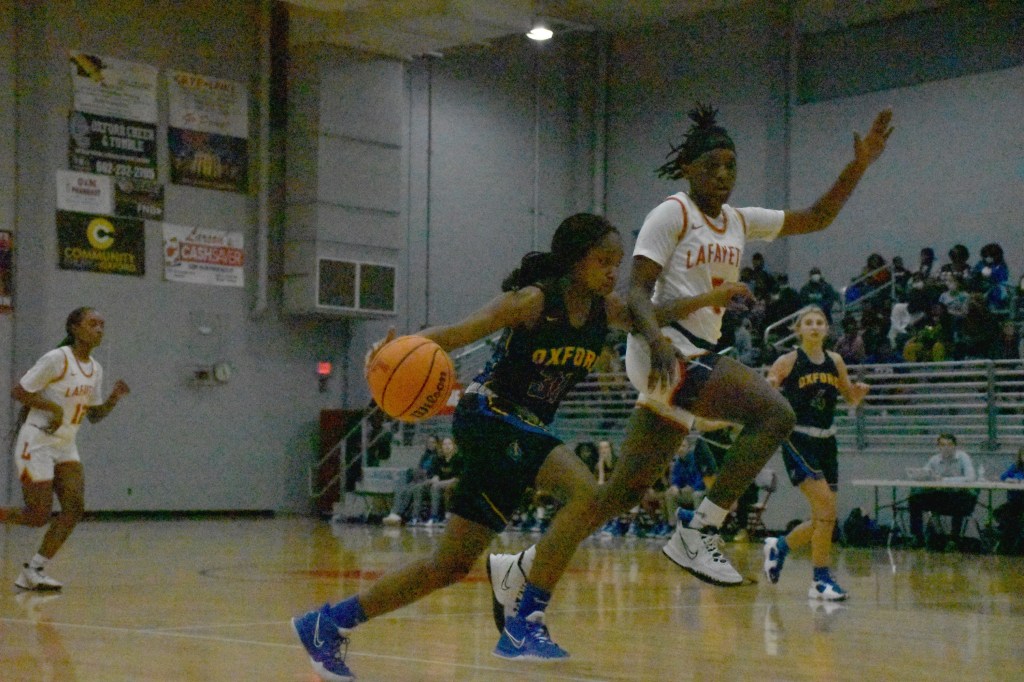 The Lafayette girls basketball team came out victorious over Oxford in the Crosstown Classic, playing suffocating defense en route to a 63-30 victory.

The Commodores blitzed the Chargers with a full-court press that stifled their offense and generated plenty of turnovers. Oxford turned the ball over in the backcourt eight times, including five in the second quarter.

“We knew they were gonna press and we worked on being in certain spots, staying composed, but I thought we caught the ball and tried to outrun it,” said Oxford head coach Cliff Ormon.

Oxford was outscored 14-2 in the second quarter, their only basket coming early in the quarter on a layup by Hannah Johnson. The Chargers looked overwhelmed by the Commodores’ defense, going nearly six minutes without putting any points on the board.

“Our second quarter we just couldn’t put it in the basket, I thought we really let each other down,” said Ormon. “Me as a coach, and our team individually as players just didn’t respond to an adverse situation. I thought it was one of the first times we just let each other down as a team.”

Lafayette seemed to get their hands on every pass, generating turnover after turnover that gave them easy looks at the rim in transition.

“They ran the press about as well as we’ve run it have all year,” said Lafayette head coach Shane Linzy. “I thought the girls did a fantastic job, not only of being in the right spots for the press, but then finishing in the press. It’s one thing to be in the right spots, get a steal, but if you can’t score out of it then it’s not doing you a whole lot of good… you want to press and get some easy baskets, and we were able to do that.”

Linzy said he was unsure whether to run the press after struggling to create those easy looks in recent games.

“We have struggled the last few weeks… the last few games we haven’t even started off in the press, but I asked the girls today and they said let’s press,” Linzy said.

The tactic paid off for the Commodores, who swept the season series with Oxford 2-0.

Mariah Reed-Jones led the way for the Commodores with 26 points, including 16 in the first half alone. The junior was an unstoppable force on both ends of the floor, snatching passes from unwitting opponents and driving the lane with ferocity.

“I thought she was great,” said Linzy. “Every aspect of the game, she was in tune with what we wanted to do. Like everybody else she wasn’t perfect, she had some things here and there that we discussed during the game, but she was able to adjust… and when she made the adjustment she was even better.”

Lafayette improves to 16-5 on the season, trailing only Neshoba Central (21-0), Brookhaven (17-3) and West Jones (15-3) in the 5A classification. The Commodores resume region play on Friday when they travel to Greenville to take on the Hornets.

Oxford falls to 6-13 following the loss. The Chargers have a tough road to the playoffs after starting 0-3 in region play, but have a chance to make up some ground with upcoming games against Grenada on Friday and Tupelo next week.