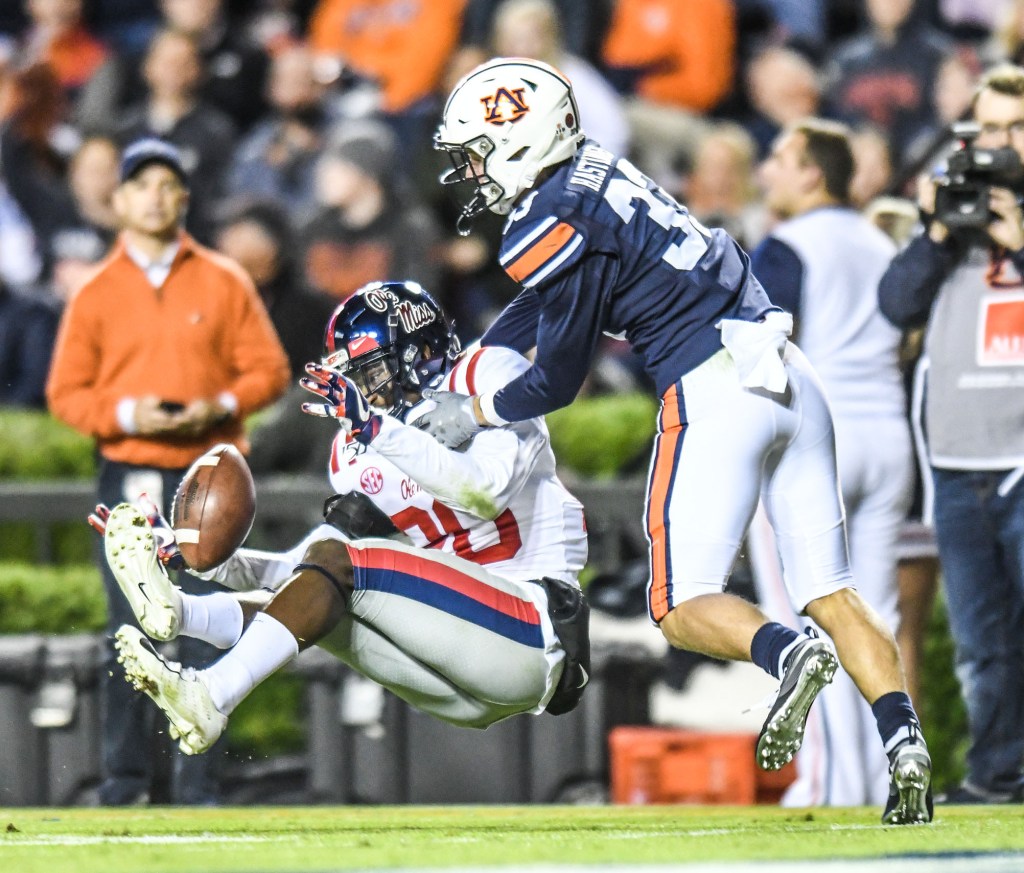 Ole Miss defensive back Keidron Smith (20) breaks up a pass to Auburn Tigers wide receiver Will Hastings (33) at Jordan-Hare Stadium in Auburn, Ala. on Saturday, November 2, 2019. (Bruce Newman, Oxford Eagle)

Ole Miss lost yet another key contributor to their historic 2021 squad Wednesday when defensive back Keidron Smith announced his intentions to enter the transfer portal.

Smith broke the news in a social media post late Wednesday morning, thanking the Ole Miss community for welcoming him with open arms.

“I want to thank you for these amazing past four years,” Smith wrote on Twitter. “Coming from West Palm Beach, Florida was a big transition for me, but you guys made me feel as if I was already home. I want to thank Coach Matt Luke for giving me the opportunity to become a Rebel, and I want to thank Coach Kiffin and his staff for nominating me as the 2021 Chucky Mullins Award winner. It was such an honor and a privilege to be able to represent this award this season for the community of Oxford and the university. I will forever love this program and will always bleed red and blue. Lastly, to my teammates I love y’all boys and I want to see each and every one of you guys be great and keep the momentum of the program moving forward. With that being said, this was a very hard decision for me but I will not be declaring for the 2022 draft. Instead, I will enter myself into the transfer portal as I look for a new home with my final year of eligibility.”

The former three-star prospect in the class of 2018 chose Ole Miss over offers from Oklahoma, LSU, Tennessee and Baylor. He played in every game for the Rebels over his four years in Oxford, recording 223 tackles, 26 pass deflections, five interceptions and five forced fumbles.

He registered 64 tackles and two interceptions in 2021, helping lead a defense that was one of the most improved units in the country.

Smith’s departure is a significant blow for Ole Miss, who will turn to Iowa State transfer Isheem Young and rising sophomore Tysheem Johnson to fill the void.

The Rebels also added four-star cornerback Davinson Igbinosun out of Union City, N.J. last week. The top player in the state of New Jersey according to 247Sports, Igbinosun will likely see plenty of playing time following a serious roster shakeup.