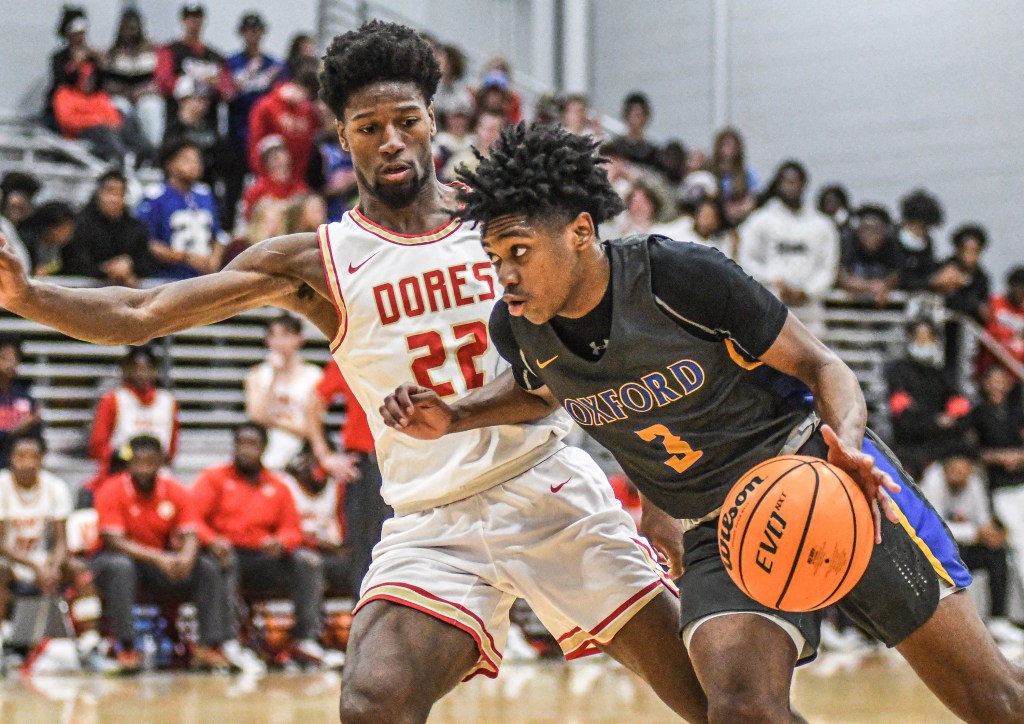 The Oxford boys basketball team secured a come-from-behind victory against crosstown rival Lafayette, riding a strong defensive performance in the fourth quarter to a 52-46 win.

The Commodores led for most of the first half, dominating the rebounding battle and using their size to their advantage on the low block.

They jumped out to an early lead thanks to a big first-quarter performance from guard Kylan Egerson. The junior scored nine points in the opening period, knocking down shot after shot from the perimeter.

Oxford looked dazed in the second quarter, scoring just six points and failing to put any pressure on the Lafayette defense. They entered the break with a five point deficit after going scoreless in the final three minutes of the half.

“We kind of had to re-teach, re-coach, re-evaluate at halftime,” said Oxford head coach Drew Tyler. “I really thought we were playing a lot of horizontal basketball in the first half.”

The Chargers looked like a completely different team in the third quarter, going on a 12-0 run early in the period to take a five point advantage. They attacked the rim with a newfound intensity, scoring basket after basket in the painted area.

“Lafayette wasn’t sliding over and taking charges, so that was our gameplan in the second half, to drive the ball to the goal,” said Tyler.

The Commodores appeared to be stunned by the run, stalling on offense and settling for contested jumpers from the perimeter.

“I just thought we got stagnant on offense,” said Lafayette head coach Brad Gray. “The ball wasn’t moving, our bodies weren’t moving… anytime the ball doesn’t move you make yourself way too easy to guard.”

Gray’s squad was bailed out near the end of the third quarter with a pair of threes from Bralen Williams and Adam Tyson that cut Oxford’s lead to two going into the final period. Lafayette tied the game at 38-38 early in the fourth before their offense stalled once again, grinding to a halt at the most important point of the game.

The Chargers went on a 10-0 run over a four-minute stretch in the final quarter, catching fire from the perimeter and playing lock-down defense down the stretch.

“We couldn’t put the ball in the basket down the stretch there,” said Gray. “Our offensive possessions weren’t very good, we weren’t moving the ball really, just kind of settling for the first shot that we got… but give credit to them… Their guys made shots, their guys made plays when they needed to, and they made free throws down the stretch.”

D.J. Davis sealed the game for Oxford at the charity stripe, going 7-8 from the line in the fourth quarter en route to a 20-point performance.

Oxford improves to 14-8 with the win, their 49th victory over the Commodores under Tyler. The Chargers move on to face Grenada on Friday in an attempt to clinch a spot in the playoffs. Lafayette falls to 9-11 following their second straight loss.