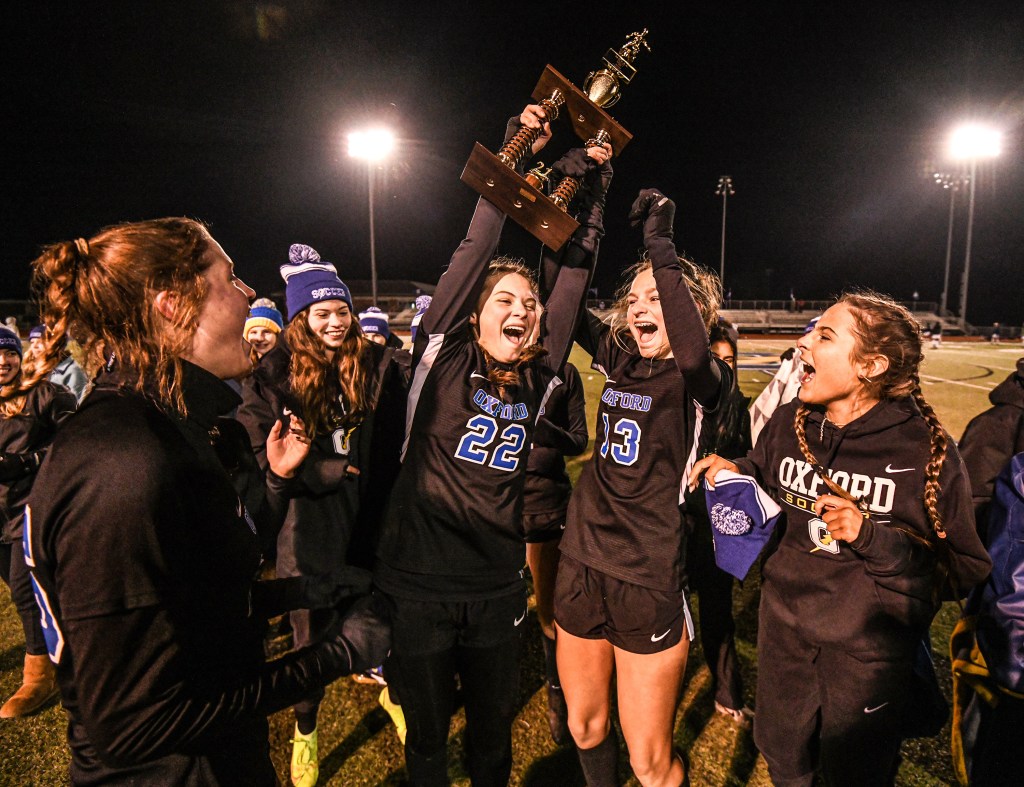 The Oxford High School girls soccer team secured the No. 1 seed in their region on Thursday when they beat Tupelo 4-3 at home in a back-and-forth thriller.

The two squads entered the contest tied for the top spot in the region. With home-field advantage in the playoffs on the line, both teams were eager to make a statement early on.

Oxford struggled with possession in the first half, playing hot potato with the ball and failing to make any inroads against a strong Golden Wave defense.

The Chargers caught an early break after Tupelo nearly scored in the opening moments of the match when an errant pass somehow found its way through the Oxford defense and passed right in front of goal, falling to the feet of a Golden Wave forward who promptly fired a shot wide left of the cage.

They got on the board just a few minutes later when Allison Greer launched a perfect cross that split two Tupelo defenders and landed at the feet of Maddie Gray, who blasted the ball into the back of the net.

Their lead did not last long however.

Just 90 seconds later their fortunes changed when a weakly hit shot from a Tupelo forward short-hopped keeper Kaitlyn Urbanek, bouncing just over her left shoulder and into the net.

The Golden Wave followed that up with another score moments later, finishing a well-placed corner kick with a powerful header into the top-left corner.

The Chargers looked stunned by the quick turnaround, falling out of their possession-based offense and launching long passes over the defense. Head coach Hunter Crane said his team failed to play to their strong suits in the first half, emphasizing that the strength of their offense is their speed on the outside.

“We’re very high-possession based. We don’t like to kick the ball high and forward and all that, we want our wings to get it on the outside and get around,” said Crane.

Oxford managed to get one back just before halftime, when Greer placed another excellent pass into the middle of the box that found the head of Parker Martin, who buried it in the back of the net.

The Chargers entered halftime with a tie and momentum, despite the Golden Wave dominating the possession battle in the first period.

They looked like a completely different team in the second half, controlling the ball and making incisive passes that opened up the Tupelo defense and created wide open lanes into the box.

“We made some adjustments to what they were doing and it gave us a little bit more space,” said Crane. “We had that message for them at halftime, to play short, fast balls. It was cold tonight, everybody’s feet are cold, the ball isn’t going as far as it usually does, so we had to adjust to that… That gave us a lot more of the angles that we were trying to get, and we just came out and played our soccer.”

Despite turning the tables in the possession battle, the Chargers failed to break through for most of the half. They generated plenty of quality opportunities, but could not find the back of the net until Gray took the onus on herself, launching an absolute laser from just outside the right side of the box that tucked into the top-left corner of the goal.

With a one-goal lead and less than 12 minutes remaining in the game, Crane pulled his team back and packed the box in an effort to prevent a late equalizer.

The strategy backfired when the Chargers tried to catch a Tupelo attacker offsides too late, allowing her to get in on goal and net the tying score.

“We dropped some people back, we were playing a little more defensive there and let one get loose… just a silly play to give up the equalizer there,” said Crane.

With time ticking away and overtime on the horizon, Oxford desperately searched for the winner. The Chargers pushed forward with everything they had, and their aggression was rewarded when Martin was taken out from behind in the penalty box, prompting the referee to point to the spot.

With the top seed on the line and the eyes of everyone in the stadium on her, Greer stood over the ball and pondered her options. She took a few steps back, took a breath, and calmly pushed one just past the outstretched gloves of Tupelo’s keeper.

The goal gave Oxford the lead with seconds on the clock, leaving the Golden Wave with no hopes of an equalizer.

As the referee blew the final whistle, the Charger bench poured onto the field in celebration. Coaches and players alike delighted in the victory, which secured home-field advantage for Oxford in the first round of the playoffs.

The Chargers finish their regular season with an 11-5-1 record, including a 5-1 performance in region play. They won their final three region games to secure the top seed, and will face Southaven in the first round of the playoffs on Tuesday.

Tupelo finishes second in the region after dropping their final two region games, and now has to travel to Hernando to take on the Tigers.