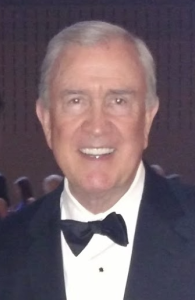 RONALD ABBIE FRANKLIN
Ronald Abbie Franklin February 2, 1942 – January 18, 2022. Ron Franklin signed off his final earthly broadcast Tuesday, January 18, 2022, bringing closure to a life well-lived over 79 years, and a career which touched millions as he painted pictures and told stories that would chronicle history and freeze-frame memories that would hang like canvasses in the hallways of the mind.
In a broadcasting profession that focused on more than 50 years of college and professional athletics, Ron left us with two abiding memories: you always recognized the face, but you never forgot the “voice”.
Simply put, Ron Franklin knew when to speak and when to be silent—letting the event itself, played by the kids he loved and coached by the people he respected—tell the story.
He was a patriot, a Christian, with a broadcasting gift that could bring the thunder of trumpets and the sweetness of a harp into your living room and leave it there with a presence few have ever been able to capture.
In his time in the industry, he would rise to become one of the most recognized figures in sports broadcasting. Ron and Bonnie Franklin met at Ole Miss, and his path to success would take him to Roswell, NM, and Tulsa where their son Ron JR. was born, and on to Houston where Ron worked for two different television stations. His first “big break” came as the play-by-play voice of the Houston Oilers, linking his legacy with that of Bum Phillips and super star running back Earl Campbell.
In the early 1980s, Ron became the radio voice of Texas Longhorn football and basketball, as Texas AD DeLoss Dodds and broadcasting pioneer Jim Host led a restructuring of the Southwest Conference Radio Network. The Franklins moved to Austin, and Host and Franklin formed a partnership that was about to make history. His work and his reputation would soon earn him national recognition, as cable television became part of the broadcast landscape.
With television, Ron would become a worldwide presence. And when he showed up, whether at the French Open, the College World Series, The Final Four or any major college game in any sport, it meant the Big Time had arrived.
Ronald Abbie Franklin was born in Jackson, Mississippi on February 2, 1942. He grew up in Hazelhurst, and at 14 moved to Oxford, home of the Ole Miss Rebels. He dreamed of playing for the Rebels but due to a concussion his opportunity to play the game ended and the chance to tell his story began. In Broadcasting, he was able to follow his passion for sports and use his voice.
Ron was a member of the Board of Directors of the Greater Austin Chapter of the National Football Foundation. He was active in the Wednesday Morning Men’s Bible Study at Tarrytown Methodist Church. He was involved with Champions for Children for 20 years, the Earl Campbell Tyler Rose Award and the Fellowship of Christian Athletes among many other charities.
Ron was preceded in death by his parents, Helen Elliott Franklin and Virgil Abbie Franklin, and two infant sons. His is survived by his wife of 56 years, Bonnie; his son, Ronald Abbie Franklin, Jr.; grandchildren Camille, Rett and Charlotte Franklin; his sister Linda Franklin Morgan; his sister in law, Sheila Furnas and numerous nieces and nephews.
A service will be held on January 31, 2022, at 2:00 p.m. at Tarrytown Methodist Church. The service will
also be available via a live stream at: https://www.tumcaustin.church/memorial-service
In lieu of flowers, donations may be made to: Helping Hand Home for Children, Fellowship of Christian Athletes, Tarrytown Methodist Church or the charity of your choice.