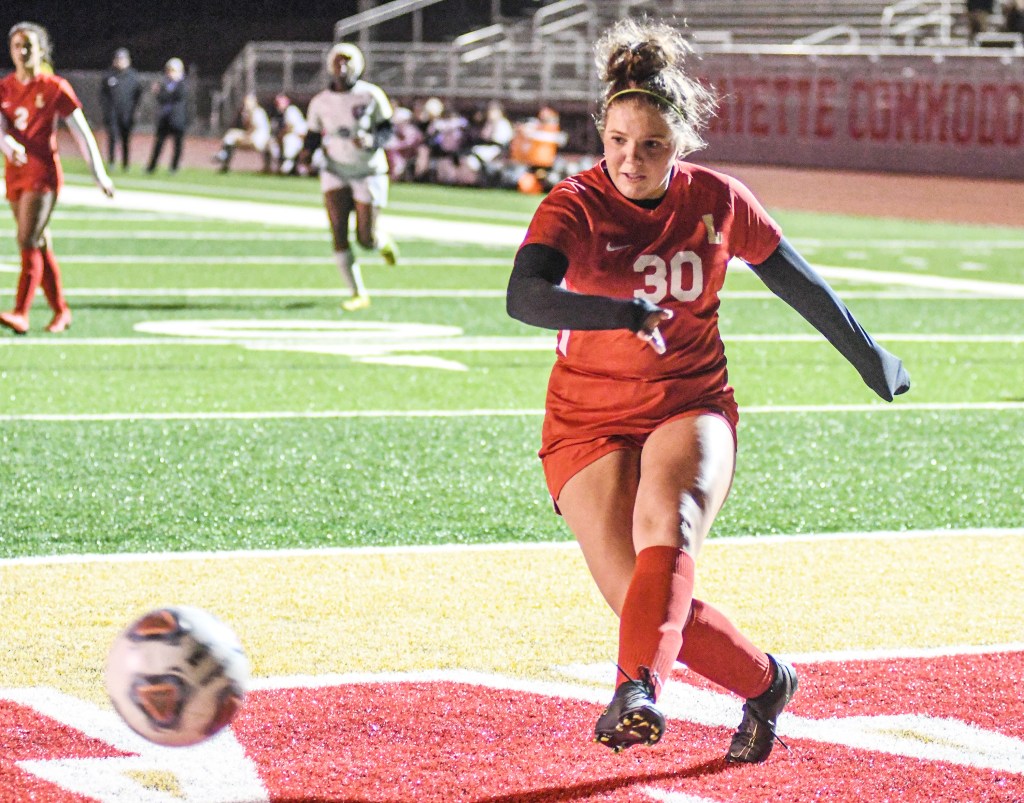 The Lafayette girls soccer team cruised to an easy victory in the first round of the playoffs, defeating Cleveland Central 7-0 in a lopsided contest.

The Commodores dominated every aspect of the game, controlling possession and dictating the tempo of the match all night.

“I think, collectively, from the backs, midfielders forwards we were able to ping the ball around and just play simple,” said head coach Melinda Scruggs. “It’s tough when there’s so many people behind the ball. We definitely wanted to get it to our backs, switch it, get it to the other side, and attack that way. I thought it worked really well.”

Lafayette struggled to break through in the first few minutes despite plenty of quality chances in front of goal, missing two good looks in the the first four minutes alone. The Commodores looked overeager in the opening moments, launching long balls from outside the box and attempting to place shots in the high corners of the net.

They finally got on the board ten minutes into the half when Caroline Perkins side-stepped two defenders and sliced a shot into the far corner of the net.

The goal opened the floodgates for Lafayette, who scored six more goals in the next 28 minutes to put the match well out of reach and trigger the mercy rule. Cleveland Central was unable to slow the onslaught, nor could they make any inroads against a stout Lafayette defense that posted its third shutout in the last four games.

“We were trying to make things a little bit too hard early,” Scruggs said. “We kind of settled in and made it a bit more simple, then were able to put a few in the back of the net.”

The Commodores were led by a trio of star goal-scorers in Perkins, sister Julia Perkins and Hudson Lindsay. Each player scored a brace in the first half, tearing apart the Wolves’ defense with incisive passes and forceful finishes. Lindsay also added three assists in the game, providing a welcome lift after missing time late in the season with an injury.

“Hudson was out for a bit and it’s so nice to have her back. The ones that have played so long together, they just kind of know where they’re gonna be,” said Scruggs. “They know how they work and what runs they like, so it’s nice to have her back and have everybody back healthy. They’re doing some really good things up top.”

The match was called early in the second half, as MHSAA rules dictate that when the goal differential reaches a spread of seven the game will conclude when it reaches the 50th minute.

The win marked the fifth consecutive first-round victory for the Commodores, who move on to face New Hope at home on Saturday in the quarterfinals. The match is scheduled to kick off at 6 p.m.