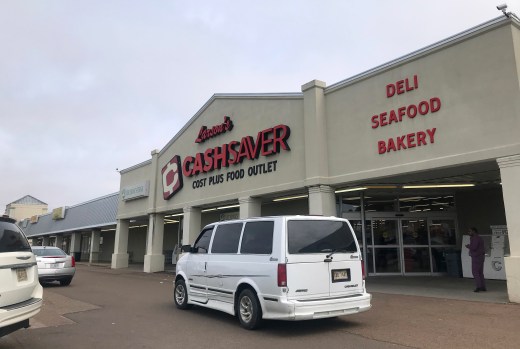 Oxford grocery stores such as Larson’s CashSaver, pictured above, are working to keep up with the demand that the COVID-19 pandemic has created. (Jake Thompson/Oxford Eagle) 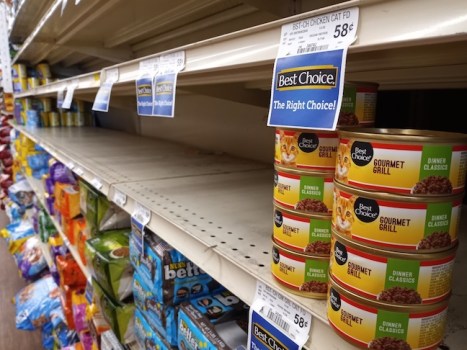 Canned pet food is one of many products that have been affected by the rise in Omicron cases, labor shortages and severe winter weather. (Photo: Maya Martin/The Oxford Eagle)

Shortages at U.S. grocery stores have grown more acute in recent weeks as new problems — like the fast-spreading omicron variant and severe weather — have piled on to the supply chain struggles and labor shortages that have plagued retailers since the coronavirus pandemic began.

The shortages are widespread, impacting produce and meat as well as packaged goods such as cereal. And they’re being reported nationwide.

Mark and Keith Larson, co-owners of Larson’s CashSaver have gotten used to the highs and lows the COVID-19 pandemic has brought to their family business.

“We’ve experienced a lot of out of stock [products],” said Mark. “It seems like when COVID first hit, it was worse. It’s kind of been like a wave. You get better and then worse and better and worse at different points during the last two years.”

“Certain categories like snack crackers and saltines and dairy items like Pillsbury biscuits, I think those are labor related,” said Keith. “With the latest waves of COVID, people haven’t been able to work.”

Part of the scarcity consumers are seeing on store shelves is due to pandemic trends that never abated – and are exacerbated by omicron. Americans are eating at home more than they used to, especially since offices and some schools remain closed.

The average U.S. household spent $144 per week at the grocery last year, according to FMI, a trade organization for groceries and food producers. That was down from the peak of $161 in 2020, but still far above the $113.50 that households spent in 2019.

According to Keith, price fluctuations are more present and common than ever. A couple of months ago, the price of lettuce was extremely high and has only recently gone back down. Other items like orange juice, canned vegetables, certain cereals like Rice Krispies and cooking oil are missing. However, beef is one product that has been in extremely high demand but short supply.

“There’s no shortage of beef and cows,” he said. “It’s just a shortage of finished carcasses, I guess is the best way to say it, because they can’t get them through the slaughterhouses. If they manage to get them through the slaughterhouses, a lot of the time they don’t have the transportation to get it to the warehouses where it’s then sent to retail.”

Mark recently attended a food show in Southaven, Mississippi to prepare for the summer and the fall and discovered the Honeysuckle turkey company had stopped production and shut down.

“Big companies like that have stopped production in several categories,” he said.

As it has with staffing at hospitals, schools and offices, the omicron variant has taken a toll on food production lines. Sean Connolly, the president and CEO of Conagra Brands, which makes Birds Eye frozen vegetables, Slim Jim meat snacks and other products, told investors last week that supplies from the company’s U.S. plants will be constrained for at least the next month due to omicron-related absences.

“There’s been a lot of different reasons [suppliers] have given us for things being out of stock,” said Mark. “Some of it being not having enough labor to produce the items, not having meat cutters to cut the ribs in the factories where they produce those.”

A lot of items come and go as the coronavirus cases come in waves, but some products have taken a bigger hit than others. The Larsons have seen the effects of labor shortages trickle down to slaughterhouse by-products.

“One thing I don’t think we’ve ever gotten back to normal on is canned cat and dog food,” said Mark. “We’ve almost never had it during the COVID time.”

Keith said companies are focusing production on products meant for human consumption, which means many canned animal products fall on the priority list.

“Part of it is transportation and trucking, too,” he said. “They can’t get drivers and they can’t get to the warehouses. At our warehouse, a lot of the time they say they don’t have enough people to actually load the trucks.”

The American Trucking Associations said in October that the U.S. was short an estimated 80,000 drivers, a historic high. And shipping remains delayed, impacting everything from imported foods to packaging that is printed overseas.

“All of the players in the supply chain ecosystem have gotten to a point where they have that playbook and they’re able to navigate that baseline level of challenges,” said Jessica Dankert, vice president of supply chain at the Retail Industry Leaders Association, a trade group.

Generally, the system works; Dankert notes that bare shelves have been a rare phenomenon over the last 20 months. It’s just that additional complications have stacked up on that baseline at the moment, she said.

Weather-related events, from snowstorms in the Mid-South to wildfires in Colorado, also have impacted product availability and caused some shoppers to stock up more than usual, exacerbating supply problems caused by the pandemic.

Retailers and food producers have been adjusting to those realities since early 2020, when panic buying at the start of the pandemic sent the industry into a tailspin. While many retailers may keep necessities like toilet paper, towels and cleaning supplies on hand, the CashSaver co-owners haven’t felt the pressure to keep more of those stocked than usual.

“[Customers] have learned more about COVID as time went on and have learned they aren’t going to get it from a shopping cart because the virus can’t live on that, but they still like to keep it clean,” said Mark.

U.S. groceries typically have 5% to 10% of their items out of stock at any given time; right now, that unavailability rate is hovering around 15%, according to Consumer Brands Association President and CEO Geoff Freeman.

“We still get shipments,” said Keith. “It’s just that there’s not a whole lot on them.”

“You just never know what you’ll be out of until the truck arrives,” said Mark.

Experts are divided on how long grocery shopping will sometimes feel like a scavenger hunt.

“We get constant questions about if we have certain items and why we don’t have them if we don’t,” said Mark.

According to Mark, some items have not seen a return to the shelves due to lack of popularity or demand for them so they can focus on the products that do sell well.

“Budweiser for instance stopped the production of some of their items that didn’t sell as good so they could focus on the ones that do sell good,” he said. “Sometimes people couldn’t understand why they couldn’t get some smaller selling items, but could still get Budweiser and Bud Light. Factories have shifted production to the items they know are going to sell and have just forgotten about other items.”

Experts consider this period a hiccup, and the country will soon settle back to more normal patterns, albeit with continuing supply chain headaches and labor shortages. But others aren’t so optimistic.

Freeman, of the Consumer Brands Association, says omicron-related disruptions could expand as the variant grips the Midwest, where many big packaged food companies like Kellogg Co. and General Mills Inc. have operations.

Freeman thinks the federal government should do a better job of ensuring that essential food workers get access to tests. He also wishes there were uniform rules for things like quarantining procedures for vaccinated workers; right now, he said, companies are dealing with a patchwork of local regulations.

“I think, as we’ve seen before, this eases as each wave eases. But the question is, do we have to be at the whims of the virus, or can we produce the amount of tests we need?” he said.

In the longer term, it could take groceries and food companies a while to figure out the customer buying patterns that emerge as the pandemic ebbs, said Doug Baker, vice president of industry relations for food industry association FMI.

Mark said the customers have been understanding of the situation and have learned to be flexible and make due with what is on the shelves.