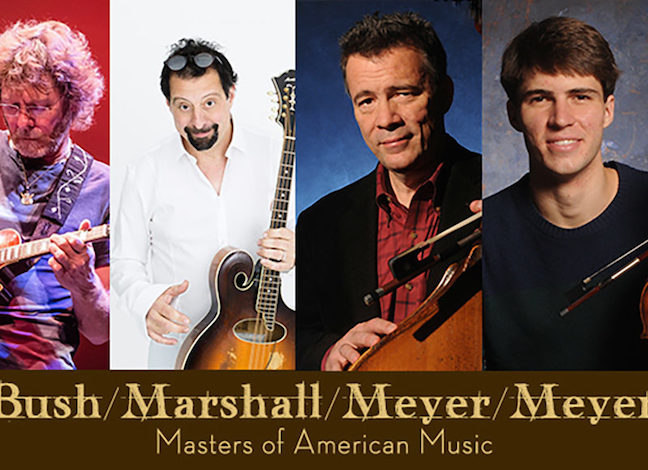 Acclaimed musicians Sam Bush, Mike Marshall and Edgar Meyer along with George Meyer will take the stage at the Gertrude C. Ford Center for the Performing Arts on Friday, January 28 at 7:30 PM for a night of progressive bluegrass style music usually heard at a bluegrass festival.

This unique collaboration will present the concert-goers a night they will never forget as they experience “genre bending” music and live performances of tracks from the 1999 release Short Trip Home which featured Edgar, Bush, Marshall and classical violinist Joshua Bell.

Double bassist Edgar, wrote the majority of the compositions recorded on the album for a quartet of violin, bass, mandolin and guitar.

According to his biography, Edgar began studying bass at the age of five under the instruction of his father and continued further to study with Stuart Sankey.

“My father’s love of music defined our household,” said Edgar. “It was sacred to him, and that affected us throughout our lives.”

Where his father set the foundation for Edgar’s love of music and performance, he grew to find three other inspirations that would have a big impact on him as an artist.

“Outside of my father, there are 3 classical composers that have probably had the biggest influence on me: Bach, Beethoven, and Mozart,” said Edgar. “Their music informs everything that I do musically.”

Edgar said he may prefer the bass to all other instruments, but the piano affords him a connection to the classical masters whose chosen medium for many of their compositions was the piano.

For more modern inspirations, Edgar said he can look among his peers.

“There are also hundreds of musicians past and present who are a significant influence,” he said. “One of those is Sam Bush. He does so much that I aspire to. His rhythm is the beating heart of any group that he is part of, and he plays in a way that makes each person better. And I could go on.”

Bush, who was inducted into the International Bluegrass Music Hall of Fame as a member of New Grass Revival, is a frequent collaborator with Edgar and Marshall. Together, with other collaborators switching in and out of the mix, they seem to create music bursting with creativity and life.

Ticketing for the Bush/Marshall/Meyer/Meyer Quartet concert is still open. For more information or to purchase a ticket, visit the Gertrude C. Ford Center website at www.fordcenter.org or call 662-915-7411. Tickets are sold at a discounted price for University of Mississippi’s faculty, staff and students.