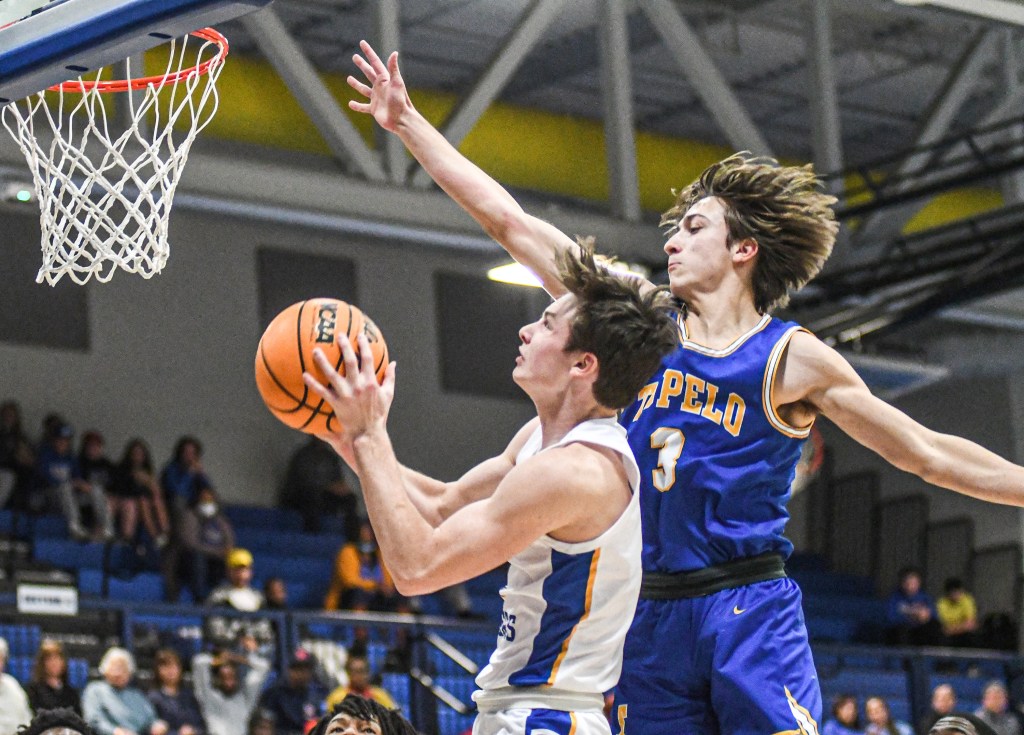 The Oxford boys basketball team lost to Tupelo 68-55 at home Tuesday night, despite leading by as much as 12 in the first half.

The Chargers blitzed the Golden Wave out of the gate, going on an 11-0 run early in the first quarter to take a 16-4 lead. They played excellent defense, generating plenty of turnovers that ignited fast-break opportunities.

“I was real pleased with how we got to the bonus early in the first half, we were in attack mode,” said head coach Drew Tyler.

Oxford carried an 18-9 lead into the second quarter, but struggled to defend the Golden Wave once they started hitting shots from the perimeter. Tupelo’s Gavin Shannon took over in the period, scoring six points and dishing slick feeds in transition that opened up lanes to the basket for teammates.

Tupelo went on an 8-2 run midway through the quarter to cut Oxford’s lead to four, but DJ Davis responded with an acrobatic finish through traffic that made it 31-25. The Golden Wave fired right back, scoring seven straight to take their first lead since the opening moments of the game.

The Chargers looked dejected after giving up the lead, but Davis provided a lift right before halftime, sinking a floater in the lane to give Oxford a 33-32 advantage at the break.

The momentum did not last long however, as Tupelo went on a 9-0 run early in the second half to take their largest lead of the night at 46-39. They dominated Oxford on the boards in the third quarter, getting second, third, and even fourth chances at the rim thanks to their outstanding offensive rebounding.

“We’ve gotta value the importance of a rebound, and we didn’t,” he added. “We don’t need to block out, we need to block back and be physical. I thought Tupelo was more physical. They blocked us under the goal, which is smart.”

Tyler opted to spread the floor in response, inserting Jackson Myatt and Carson Schmelzer and going five-out in an attempt to create driving lanes for his ball handlers.

“Tupelo played a 2-3, they played man…so in and out of their defenses I put different groups in. I put some of our shooters in the game to stretch the floor, where [Omari] Frierson, [Jacquez] Elliot and Davis could kind of penetrate and get to the goal.”

The strategy paid off, as Oxford was able to cut the deficit back to three with a triple from Frierson in the closing moments of the third quarter.

They struggled to defend the Golden Wave in the final period however, giving up rebound after rebound that led to easy looks at the rim.

“Basketball is a physical game, and I don’t think my team played real physical on the defensive end,” said Tyler. “We’re undersized, we have less experience than the other three teams in our region, so we can’t allow people to get second and third shots. We’re not talented enough or physical enough to win games if we’re letting people get a second or third opportunity.”

The Chargers trailed 52-49 with 4:34 remaining before the wheels fell off. Two three-pointers in quick succession from London Fields and Hayes Halbert pushed Tupelo’s lead out to nine, and Oxford was unable to come up with a response.

The Golden Wave closed the fourth quarter on a 16-6 run that put the game on ice and handed the Chargers their third loss in region play.

“They were scoring off of live plays, off of inbounds plays… and we actually lost about three possessions where we had mix-ups on who we had, and it led to them having open shots, it led to them penetrating to the goal, it just snowballed on us,” said Tyler.

Tyler was frustrated with his teams lack of effort down the stretch, saying that their lack of fight concerned him moving forward.

“Does it bother me that we lost tonight? It bothers me that we didn’t block out, and have more fight, more desire to limit them to one shot. That upsets me,” Tyler said.

He also noted that he chose not to empty out the playbook in this game with a date with the Golden Wave in the regional tournament on the horizon. He said that both coaches understood this would not be their last matchup of the season.

“We both know that it comes down to that region tournament,” said Tyler.

The Chargers (15-9, 2-3 Region 1) have one regional game remaining on their schedule against Starkville on Jan. 28. They close out their regular season with a pair of non-region games at Coffeeville on Feb. 1 and at home against South Panola on Feb. 3.