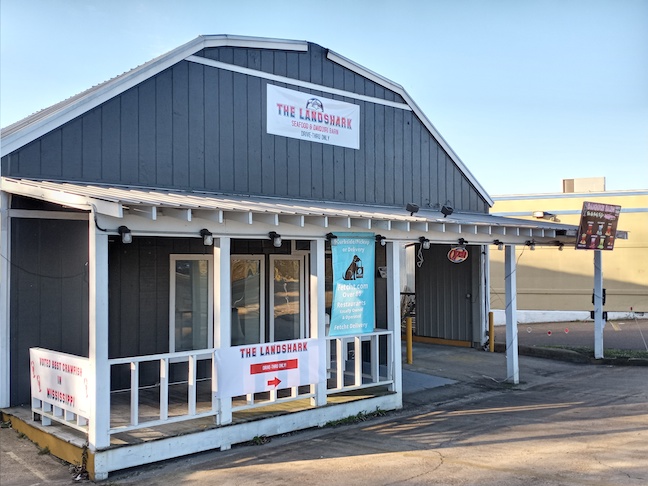 Mississippi’s biggest crawfish brand is open and ready to serve the community at their new, drive-thru only location on Jackson Avenue West. The Landshark offers a wide variety of cooked seafood and the lowest-priced live crawfish for everyone to enjoy. (Photo: Maya Martin/The Oxford Eagle)

Mississippi’s Kings of Crawfish make their return to Oxford. The Landshark ushers in a season of seafood on Friday at 11 a.m. at a new location.

Formerly located near The Mustard Seed Antique Mall, Landshark is now open to the community at The Landshark’s Seafood & Daiquiri Barn on 1412 Jackson Avenue West. The restaurant is drive-thru only.

According to Landshark founder Jared Foster, what started in 2015 as the smallest crawfish company in Oxford grew into the largest crawfish business in Mississippi.

“When we started the company originally years back, it was a one-man mission at first and soon the business grew,” said Foster. The business had seven to eight crawfish competitors at the time but, seven years later, Landshark is still going strong along with a loyal customer base.

Landshark offers a variety of options for seafood lovers like lobster, shrimp, crab and two kinds of fried catfish, but the star of the show is the lowest-priced live crawfish in Mississippi, according to Foster.

However, the season’s opening had to be pushed back due to frozen ponds on a 33-year-old family-run farm in Louisiana where they source their product. Crawfish early in the season are small because of cold weather and mating season, but as the weather becomes warmer, the crawfish can get larger.

“Landshark has been a sustainable brand because we put the customer first,” he said. “Everybody has a short window of opportunity to sell crawfish, so a lot of people feel like they need to rush out and rush the mission. For us, it’s about making sure that the customer’s dollar is taken care of.”

The customers are very vocal about their support of Landshark. Just a quick scroll through their social media shows the community’s passion toward their food. Landshark is open to suggestions on how to make itself better.

“Their first impression may be their last,” said Foster. “So with us, the main thing we want to do is open up at the right time.”

Another reason for the delay? The business had to move locations because the brand had gotten bigger than anyone expected.

“We needed basically a storefront on Jackson Avenue instead of being hidden,” said the founder.

Landshark has been franchised and now has ten operating locations across the state in cities like Canton, Hattiesburg and Ocean Springs. Ole Miss alumna Meghan Burnett, co-owner of the Hattiesburg and Oxford locations, has transferred up to Oxford to take over.

Foster said he is excited for this new start with Landshark and that he is pushing for customers to come all year round, not just during crawfish season. He highlights one menu item, the fried catfish, a southern specialty.

“We have two homemade fried catfish batter — a Cajun style and a Southern style— and I want our catfish to blow up so we can be a sustainable brand,” he said.

The Landshark Seafood & Daiquiri Barn is open Thursday through Sunday from 11 a.m. to 8 p.m. and on occasional Mondays if crawfish is available. For more information on Landshark, visit www.facebook.com/THELANDSHARK8.