Best Musical Ever! OHS Theatre to open pre-sale for The Spongebob Musical 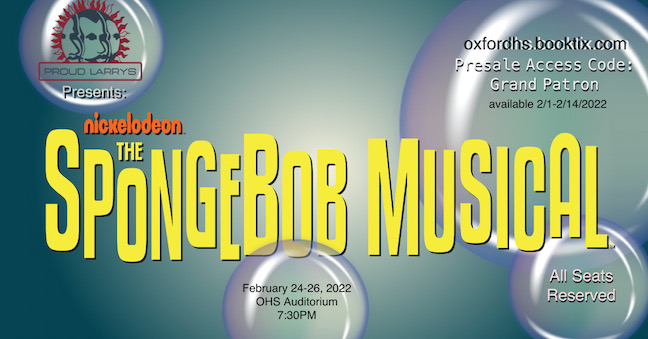 Want to get your first pick of seats for Oxford High School’s big musical event of the school year? The OHS Theatre department will officially open tickets for presale to Grand Patrons on February 1.

This year, OHS is producing THE SPONGEBOB MUSICAL presented by Proud Larry’s which is based on the beloved animated series created by Stephen Hillenburg and features a book by Kyle Jarrow, with original songs by Yolanda Adams, Steven Tyler and Joe Perry of Aerosmith, Sara Bareilles, John Legend, David Bowie and more.

Audiences will watch as SpongeBob and all of Bikini Bottom face the total annihilation of their undersea world. When all hope is lost, one hero uses the power of optimism to save their home.

OHS Theatre teacher John Davenport said his students have a big part in producing the musical and creating the perfect musical experience. As someone who has never seen the cartoon SpongeBob SquarePants, Davenport assures parents or guardians who also aren’t familiar with SpongeBob will have just as great of a time as their kids.

“You don’t have to be a fan or be familiar with the series to understand or enjoy the show,” he said. “It has a good message, it’s full of optimism and it has music by so many great artists.”

SPONGEBOB will be the first live musical performed in the new OHS theatre. Previously, OHS productions would be held at the Gertrude C. Ford Center for the Performing Arts.

According to Davenport, the Grand Patron has long been a staple in the tradition of the annual OHS Musical, dating back to 1976.

“This Grand Patron system was essentially a very long list of community members and supporters who would get called every year to be a Grand Patron and they would expect a call,” said Davenport. “Even if they didn’t have kids in the school, it was such a community event.”

Even though OHS has been away from this custom for several years now since transitioning to the new campus, it is bringing it back to reignite the tried and true tradition — but in a modern sense.

Grand Patrons can get first dibs at your desired seats, as all seats are reserved, before tickets are released to the general public. The time-frame for early access is limited to February 1-14, 2022. Each ticket cost $15 dollars and Grand Patrons will be listed in the production Playbill for this year’s musical.

“For the musical the seats are reserved and, generally, there were so many Grand Patrons that by the time the tickets went on sale to the general public, there just weren’t any left,” said Davenport.

Grand Patrons are not limited to just cast and crew families so please feel free to share the early access code — Grand Patron — with anyone and everyone.

“We would love to have our Playbill filled with  names of Grand Patrons as in past traditions,” Davenport said.

If you are not interested in being a Grand Patron, tickets will go on sale to the general public beginning February 15, 2022 and are priced at $10 for adults and $5 for students. These tickets may be purchased from the same website where you will be prompted to choose your  seats as all seats are reserved. If you are using a district ID to obtain tickets, your seats will be chosen at the door on the evening you wish to attend.

Season Subscribers for the 2021-2022 Season are already considered a Grand Patron and those tickets are already accounted for. Season subscribers will receive a special online code for choosing their seats for the performances of their choice through email.

To be a Grand Patron for THE SPONGEBOB MUSICAL, you simply go to our online ticketing website at oxfordhs.booktix.com and enter the words Grand Patron in the Pre-sale Access Code box in the  upper right corner. This will bring you to a page to choose your dates and seats.