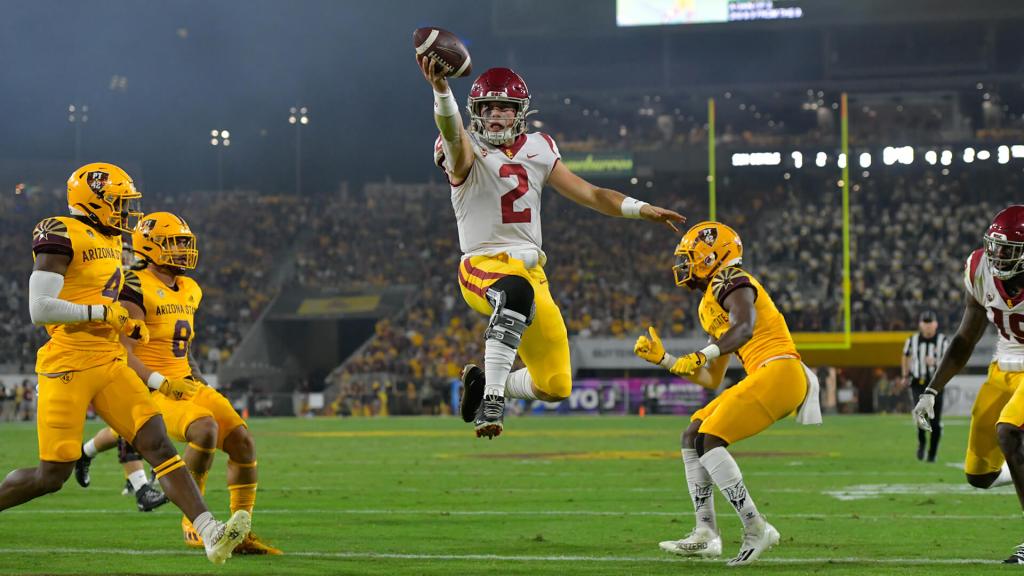 Trigg formally broke the news on social media Saturday, tweeting an image of himself in an Ole Miss uniform with the caption, “Hotty Toddy.”

Dart followed shortly thereafter, posting a letter to his former USC teammates and the Ole Miss community on Sunday.

“I love SC and am extremely grateful for my time here,” Dart wrote. “Now! We heading to the ‘Sip. To Ole Miss nation … LFG! I can already tell Oxford is a special place! I can’t wait to get to work and give you all I have! Hotty Toddy! Ole Miss are you ready?”

The duo, who reportedly enrolled at the university last week, were seen as a package deal as soon as they announced their intentions to transfer, choosing Ole Miss over offers from Oklahoma, BYU and others.

Dart, a former 4-star quarterback out of Draper, Utah, was the No. 3 player in the transfer portal following a promising freshman campaign with the Trojans. The 2020 Gatorade National Football Player of the Year threw for 1,353 yards and nine touchdowns in six games last season, adding 43 yards and two more touchdowns on the ground.

Trigg was the No. 2 tight end in the portal after posting seven receptions for 109 yards and a touchdown as a freshman in 2021. The four-star tight end provides a vertical threat for head coach Lane Kiffin’s up-tempo offense, pairing a sizable frame with next-level athleticism and excellent hands. He is also expected to play basketball for Kermit Davis’s squad next season.

Ole Miss continues to add significant weapons through the transfer portal, jumping to the top of 247Sports’s transfer rankings with the latest additions. They also climb to No. 13 in the overall rankings, fifth in the SEC behind Alabama, Texas A&M, Georgia and LSU.

Kiffin has successfully used the portal to rebuild after losing several key contributors from the Rebels’ record-breaking 2021 team, adding Dart and Trigg along with five-star running back Zach Evans from TCU to form a talented young offensive core moving forward.