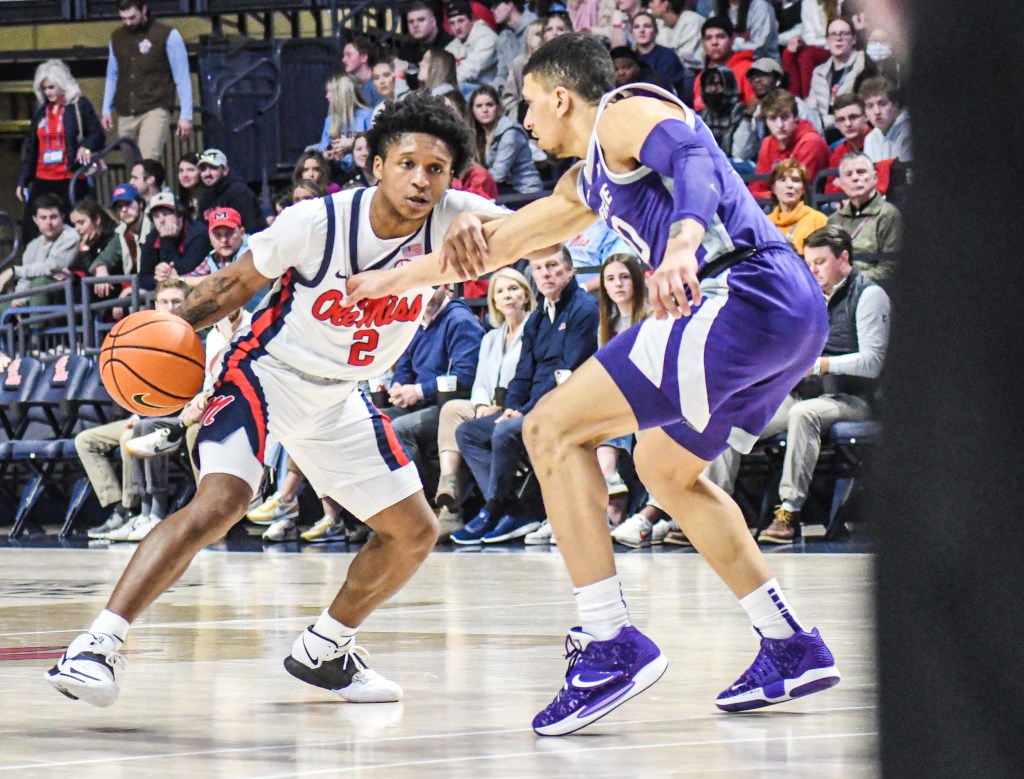 Mississippi guard Daeshun Ruffin (2) is guarded by Kansas State guard Mike McGuirl (00) during the first half of a NCAA college basketball game, at the Sandy and John Black Pavilion in Oxford, Miss., Saturday, Jan. 29, 2022. (©Bruce Newman)

Ole Miss point guard Daeshun Ruffin was named SEC freshman of the week on Monday, becoming the first male Rebel to win the honor since Jarvis Summers in December 2011.

He scored a career-high 21 points against Florida on Jan. 24, shooting 6-13 from the field and 9-10 from the free throw line. He scored 15 points in the second half alone, leading the Rebels to their second win in conference play.

The five-foot-nine-inch Ruffin also recorded a career high on the boards last week, posting seven rebounds in a 67-56 loss to Kansas State on Jan. 29.

Ruffin is averaging 12.2 points, 3.5 assists and 2.3 steals this season. He has scored in double figures in nine of his 13 appearances, including three straight double-digit performances last week.

The freshman was asked to shoulder the brunt of the offensive load after senior guard Jarkel Joiner went down early in January with a back injury. The Oxford native underwent a procedure to address the injury on Jan. 13 and is not expected to return until the end of February.

Ole Miss (11-10, 2-6 SEC) has struggled to find consistent offense since the loss of their leading scorer, and faces a tough stretch over the next few weeks with games at No. 25 LSU on Feb. 1, at Florida on Feb. 5, and versus Alabama on Feb. 9.