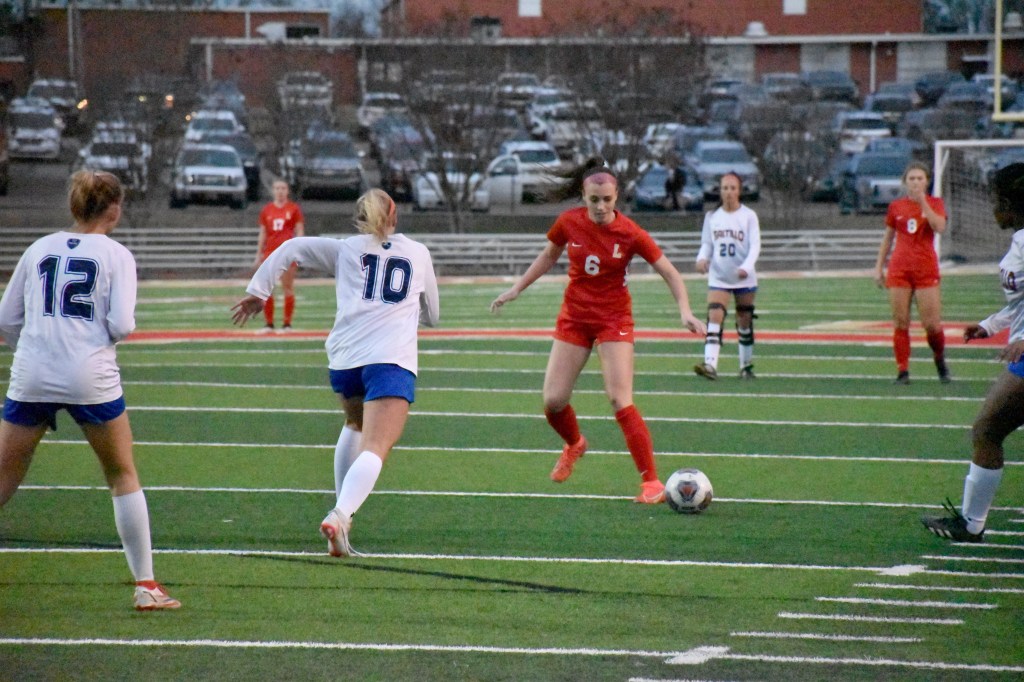 Lafayette's Hudson Lindsay (6) dribbles through the Saltillo defense in the semifinals of the MHSAA Class 5A state playoffs on Feb. 1, 2022 (Jared Redding).

The Lafayette girls soccer team defeated rival Saltillo 2-1 at home on Tuesday in the semifinals of the MHSAA Class 5A state playoffs, earning their fourth straight trip to the state championship game.

The win marked the third consecutive semifinal victory against Saltillo for the Commodores, who defeated the Tigers in the semifinals of both the 2021 and 2020 playoffs.

“It’s always a battle against Saltillo,” said head coach Melinda Scruggs. “They always come out and play hard against us… it got physical on both sides [tonight], it’s just one of those things where we had to keep pressing and doing the things that we’ve been working on.”

The game was hotly contested from the start, with both teams furiously pushing the ball forward into the box.

Julia Perkins controlled the attack for Lafayette in the first half, launching probing passes down the wings in an effort to stretch out the defense and get in behind the Tigers’ back line.

The junior forward nearly scored in the first minute of the game, intercepting a lazy pass before turning back to the center of the field and firing a curling shot that missed just wide of the goal.

The Commodores finally got on the board midway through the first half when Perkins threaded a perfect pass through the Saltillo defense to sister Caroline Perkins, who buried it in the back of the net for the first score of the night.

Saltillo nearly got one back in the closing moments of the half when a well-placed cross into the box found its way to the Tigers’ Riley Dickens, but junior left back Grace Foster stepped in at the last moment to deflect the pass and stop the breakaway.

The Commodores carried a 1-0 lead into the break, but Saltillo came out aggressively in the second half, playing physical defense and launching long balls over the top of the Lafayette defense.

Goalkeeper Madison Buford denied the Tigers at nearly every turn however, piling up save after save in the second half to keep Saltillo off the board.  She made perhaps the most impressive play of the night early in the second half, diving full-extension to deflect a shot intended for the lower left corner that prompted cheers from the bench and brought the crowd to its feet.

Saltillo finally broke through moments later when Dickens flicked a shot with her left foot that snuck just over Buford’s outstretched arms and into the back of the net.

Locked in a 1-1 tie, Lafayette struggled to get balls into the box as the Tigers clamped down on Julia Perkins, marking her with multiple defenders every time the ball was at her feet. The Commodores were forced to adjust their strategy, using their wings to attack and looking for Perkins on runs into the box.

“Julia likes to turn face, but unfortunately they had two, three, four players on her all the time, so we talked about playing the way she faces and getting in another way,” said Scruggs.

With a one-goal lead in hand Lafayette slowed the pace to a halt, killing time by launching the ball into the corners of the pitch and keeping it as far from their own goal as possible.

As the referee blew the final whistle the Commodores streamed onto the pitch, gathering at the 20 yard line in celebration as they reveled in the unbridled joy of their fourth consecutive trip to the state championship game.

“Our slogan is ‘to the top’ and we talk about the mountains that you have to climb. It’s really hard to stay at the top of that mountain, and I’m just really proud that we get another opportunity,” Scruggs said.

The Commodores will face South Half champions Florence on Saturday at Brandon High School in Brandon, Mississippi. The Eagles defeated Jones County 3-0 in the other semifinal for their 21st victory of the season, the most in any classification this season.