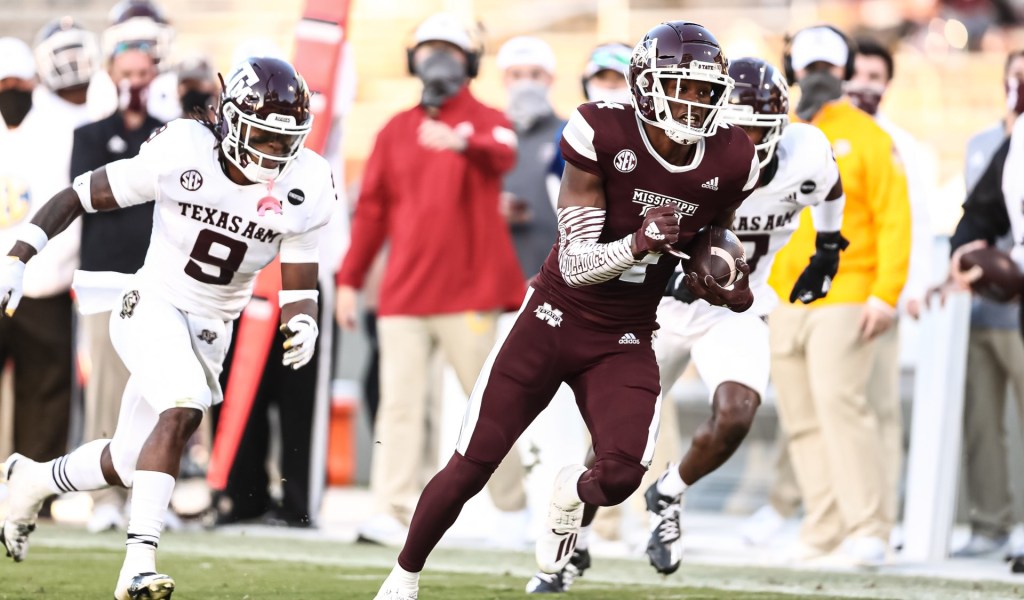 Ole Miss transfer Malik Heath (4) breaks away down the left sideline in a game between Mississippi State and Texas A&M on Oct. 17, 2020. Heath announced his intentions to transfer to Ole Miss on Wednesday (Mississippi State Athletics)

The Rebels have been the most active team in the portal this offseason, loading up with one five-star and eight four-star transfers.

Heath is the first player in the modern era to transfer from Mississippi State to Ole Miss. He is the third player to transfer to Ole Miss from a rival SEC West school this offseason, following Auburn’s Ladarius Tennison and J.J. Pegues.

He is also the second receiver to transfer to Ole Miss since the end of the regular season, joining former Louisville wideout Jordan Watkins in making the jump to Oxford.

Heath played in 21 games for Mississippi St. over the past two seasons after joining the Bulldogs from Copiah-Lincoln Community College. He recorded 71 receptions for 749 yards and eight touchdowns during his time in Starkville, including 34 catches for 442 yards and five scores in 2021.

He was hospitalized after a car accident on Dec. 3 that forced him to undergo surgery, causing him to miss the Bulldogs’ Liberty Bowl matchup against Texas Tech

The 6-foot-3 receiver made the announcement on social media early Wednesday afternoon, thanking Mississippi St. fans and expressing gratitude for the opportunity to continue playing in the SEC.

“Thank you god for giving me another opportunity that most people don’t get in a life time and that is to play SEC football again,” Heath wrote on Twitter. “I hope people understand my decision and why I did it. Thank you Mississippi State fans for supporting me throughout my time there and I love you all.”

Heath provides another weapon for a Rebel offense retooling after an historic 10-win regular season in 2021. Ole Miss also added former USC pairing Jaxson Dart and Michael Trigg, as well as TCU running back Zach Evans, the No. 2 back in the class of 2020.