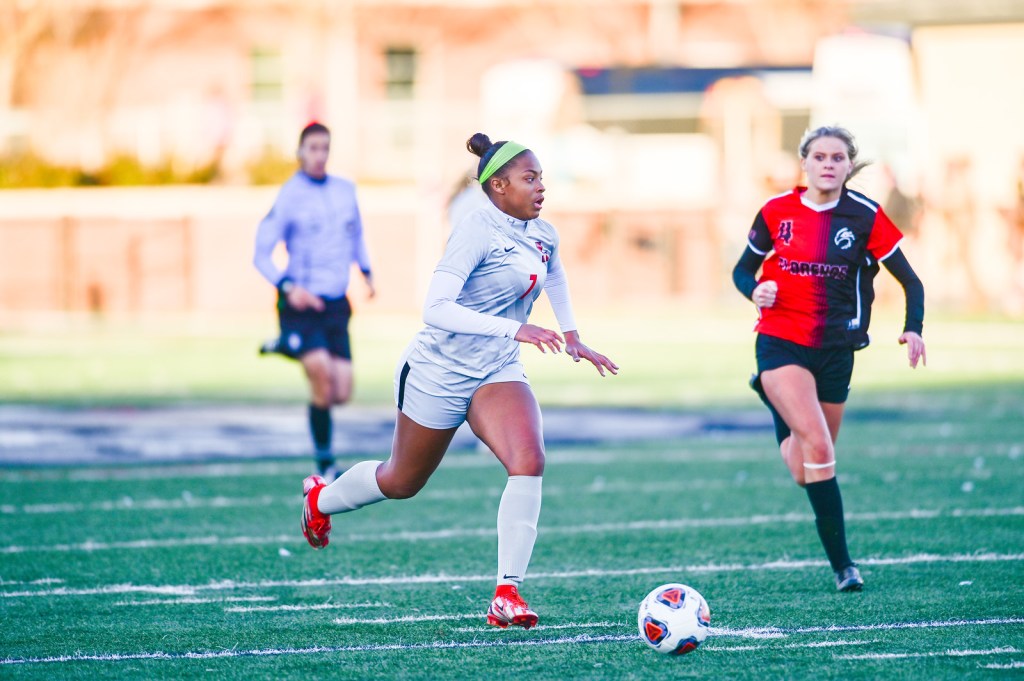 The streak is over.

After three straight state titles, the Lafayette girls soccer team lost to Florence in the 2022 MHSAA Class 5A championship game on Saturday, bringing their remarkable run of dominance to an end.

The Commodores battled fiercely throughout the night, but were outmatched against a Florence team that was bigger, faster and stronger at nearly every position.

“I knew it was going to be a battle. They’re very similar to us and I knew that we had to be ready for it,” said head coach Melinda Scruggs. “Honestly, I don’t think we could’ve done anything differently. They played their hearts out and played with grit right until the end, unfortunately it didn’t fall our way.”

Lafayette was unable to maintain possession early on, struggling against the Eagles’ swarming defense. The Commodores appeared flustered by Florence’s tactical precision, but eventually settled in after their slow start.

“We took a few minutes to get our feet under us without the normal warmup. I don’t want to make any excuses, but the bottom line is it took us a minute,” Scruggs said. “Once we figured it out, we figured out who needed to mark up where and I thought we did a good job of controlling stuff.”

Scruggs’s squad got on the board first courtesy of a strike from freshman winger Caroline Perkins that found the near side of the net to give Lafayette a 1-0 lead midway through the first half.

The Commodores’ lead did not last long however, as Florence answered 90 seconds later with a goal of their own on a corner kick that bounced all around the box before finding the back of the net.

Perkins nearly put Lafayette back on top right before halftime, but her long, curling shot from just outside the box ricocheted off the left goalpost and out of play.

The Commodores entered halftime locked in a 1-1 draw, but things got out of hand quickly for Scruggs’s squad in the second half.

They conceded their second goal of the night in the opening minutes of the half due to a defensive breakdown that left Florence’s Christina Guzman wide open in the box. The Eagles followed that up with another successful set piece six minutes later, extending their lead to 3-1 on a header from Addie Grace Barnard.

Lafayette looked rattled after conceding three unanswered, launching long, wild passes and failing to make any inroads into the Eagles’ defense. With time ticking away in the second half, the Commodores looked to their veteran leaders to get them back in the game.

Senior midfielder Hudson Lindsay answered the call, dribbling through multiple waves of defenders before being taken out from behind in the box to earn a penalty kick.

Lafayette played with renewed energy after Lindsay converted from the spot, desperately searching for an equalizer as Florence tried to run out the clock.

Perkins nearly found it in the closing minutes, launching a rocket from the left side of the box that missed by mere inches, striking the corner of the goalpost before falling to the goalkeeper’s feet.

As the referee blew the final whistle the Commodores looked around in dismay as Florence’s bench streamed onto the field to celebrate their third state championship in five years.

Scruggs said she was impressed with her team’s effort despite the outcome, adding that the disappointment will provide fuel to the fire for next year’s squad.

“Sometimes it falls your way and sometimes it doesn’t. The effort was there. I know these girls will be back and ready next year,” she said.